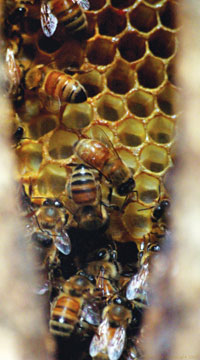 A LIFE-threatening bacterium has been spreading quietly for some time and mutating.

Resistant to almost all antibiotics, the Methicillin Resistant Staphylo-coccus aureus, or MRSA, has infected millions worldwide. Doctors are worried, because the bacterium usually rifles through hospitals, takes hold of open wounds, respiratory and urinary tracts and causes difficult- to-treat infections. Almost 20 per cent of people who contract the disease succumb to it.

“It spreads easily through direct contact with patients, hospital staff or via contaminated surfaces,” said Kelly Abshire, microbiologist at Miami University in USA. More people in the US die of MRSA than HIV/AIDS. In India, over 30 per cent hospitals are rife with the bacteria. As of now, the only way to contain it are sanitation measures and safe disposal of biological waste. Just as all potent drugs in the antibiotic arsenal are rendered ineffective by the bacterium, scientists at University of Strathclyde in the UK said bees hold hope.

While working with Natures Laboratory, a bee glue research centre in the UK, as part of an initiative to develop antibiotics from natural sources, the scientists found bee glue, or propolis, has the anti-bacterial property to fight the notorious MRSA.

“We investigated propolis because bees use it as an antiseptic glue to seal gaps between honeycombs and preserve their hives from microbial contamination. Though several scientific journals report its use as an antimicrobial agent, very few have dealt with its anti-MRSA activity,” said lead researcher Veronique Seidel.

Bees make propolis from plant resins. Scientists collected propolis from the Pacific Region because it contains exudates from poplar trees, which are rich in antibacterial agents like flavonoids and phenolic acids. Propolis collected from tropical countries lacks these components.

The researchers extracted various agents—propolin H, G, C and D— and tested them on 15 MRSA strains. MRSA strains were grown on a gellike medium, agar, treated with propolins. After 18 hours at 37oC, bacteria grew well on agar treated with propolins H and G, but their growth was clogged in the presence of propolins C and D, the scientists reported in the August issue of Phytotherapy Research. “These agents could act as templates for the development of improved anti-MRSA drugs,” said Seidel.