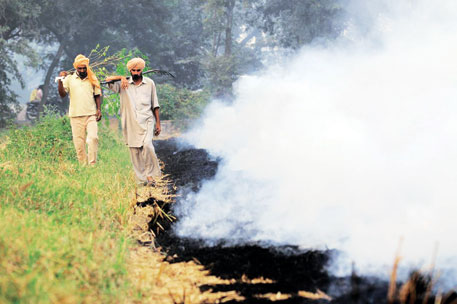 The understanding about black carbon has come a long way since the nebulous beginning in the seventies, when all the world understood was suspended particulate matter (SPM) – a local pollutant from incomplete combustion, indicted for pollution from fires and vehicles.

Black carbon and warming: Black carbon can absorb heat and warm up the surrounding atmosphere. Scientists calculate the potential of a gas to cause global warming in terms of ‘radiative forcing’. Radiative forcing is the difference of sunlight absorbed by the Earth and energy radiated back to space in watts per square meter of the Earth's surface. More incoming energy is more warming.

More outgoing energy is negative forcing that cools. Black carbon has the shortest life – between 3-8 days. And there is uncertainty regarding its potential of causing climate change. The uncertainty in the emission metrics such as Global Warming Potential (GWP) and Global Temperature change Potential (GTP) of Black Carbon is wide reflecting the current challenges related to understanding and quantifying the various effects of black carbon on climate systems in different regions of the world.

However, the science of black carbon has improved over the years and so has the understanding on its impacts on climate. The latest IPCC report AR5 has taken note of the recent research and is more explicit in its discussion on black carbon than it was ever before. For instance, AR5 has doubled the estimate of warming (Global mean radiative forcing) of black carbon aerosol from fossil fuels and biofuels from its previous AR4 report.

There is also considerable uncertainty about comparing the global warming potential of long-lived CO2 with short-lived pollutants like black carbon. For instance, if GWP of CO2 over 100 years is 1, that of black carbon is estimated to be 900. But this comparison has limitations. For black carbon, a short time horizon like 20 years will capture all of its radiative forcing because it is short lived – few hours to few days. Their effect is gone as soon as they fall on ground.

But a very small part of CO2 forcing can be captured in such short time as most of its impact will show up in 100 years or more. But in that long time horizon the effect of black carbon will become very small. This explains why the 100-year GWP for black carbon is much lower than the 20-year GWP.

Also GWP assumes that the emission being compared is evenly spread across the globe as is the case with CO2. But black carbon is short-lived and its radiative forcing is regionally concentrated. So this assumption does not hold. Black carbon travels short distances and creates hot spots and varies according to local conditions. Black carbon emissions weighted by the GWP do not necessarily represent a CO2-equivalent value. Scientists are now discussing if an alternative method can be found for comparison (see Box: Comparing warming impacts of shortlived pollutants).

On the other hand, there is difference in opinion among the scientific community on the relative importance to be attached to the short-lived climate pollutants as a climate mitigation strategy. For instance, a group of scientists in the 2014 Proceedings of the National Academy of Sciences (PNAS) have taken the view on the potential impact of black carbon on long term warming. It states that reducing the emissions of short-lived climate pollutants can reduce the rate of warming in the short term but will only have a limited effect on long-term warming, which is mainly driven by CO2 emissions. Early action on local pollutants will influence near-term temperatures and bring small benefits for limiting maximum warming relative to comparable reductions taking place later. They caution against overestimating the effect of reducing short-lived forcers in long term climate stabilisation.

How thermodynamic environments control stratocumulus microphysics and interactions with aerosols

Simulation of distributions and radiative impacts of biomass-burning aerosols