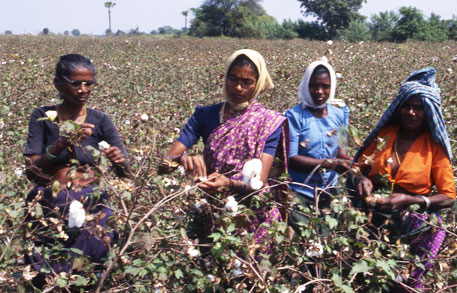 A Supreme Court-mandated committee of technical experts comprising scientists from top public research laboratories and academic institutions has recommended a ten-year moratorium on field trials of Bt transgenics in all food crops that are directly consumed by people.Â´â•—â”

Bt crops are genetically modified (GM) plants that use a toxic protein from the naturally occurring soil bacterium, Bacillus thuringiensis (hence Bt), to kill insects. The Bt technology, first developed by American biotech giant Monsanto Company in 1986, was introduced in India a decade ago in cotton seeds. Three years ago, Monsanto’s Indian partner, Maharashtra Hybrid Seed Company (Mahyco) sought to commercialise a GM brinjal or eggplant using the same Bt gene, but was stopped by then minister for environment and forests Jairam Ramesh who imposed an indefinite moratorium on its release in the wake of widespread concerns over its safety in a food crop.

The interim report of Technical Expert Committee (TEC), as it called, has also called for a moratorium on field trials of herbicide tolerant (HT) crops.  In its interim report just submitted to the Supreme Court, TEC said the freeze moratorium was necessary “in view of the concerns bearing on health, environmental and socio-economic considerations” and until an independent committee of experts and stakeholders “has examined and assessed the potential impact of HT technology and its suitability in the Indian context”.

This is the first time that a high-level committee in India has found the regulatory system and the field trial protocol “unsatisfactory and inadequate, requiring major changes, restructuring and strengthening”. Among the weaknesses it highlighted, the conflict of interest in the regulatory structure given that the Review Committee on Genetic Manipulation is part of the Department of Biotechnology, whose mandate is to promote the development of biotech products, including GM crops.

Of far-reaching consequence is its call for a re-examination of all biosafety data for applications in process as well as those that have been approved for release. This, it makes clear, should be done by scientists who are qualified in biosafety science and experienced in evaluation of biosafety dossiers for transgenic plants. If necessary, this should be done by international experts who have the necessary experience. The reason: TEC has found there have been several cases in which problematic aspects of the data in the safety dossiers have been ignored by the regulators.

Among its important recommendations is the addition of long-term and inter-generational toxicity studies to the current requirement which stops at sub-chronic stage. This suggestion comes at a time when there is evidence that long-term toxicity studies reveal health impacts that are just hinted at in the shorter (90-day) studies by GM crop developers that are currently the norm (see The GM maize rats ).

Significantly, the committee has recommended that there should be designated sites where stage I and stage II field trial can be carried and nowhere else. Trials, it emphasised, should not be conducted in farmers’ fields as is the practice now.  This has led to a series of protests by anti-GM activists and farmers who had not been informed that GM trials were being conducted in their vicinity. One such flare-up took place in Kurukshetra, Haryana where farmers objected to Monsanto’s GM maize trials.

TEC has also said that scientists qualified in evaluation of the biosafety data of GM crops should be engaged to analyse safety data submitted by developers and that preliminary biosafety tests prior to field trials, including sub-chronic toxicity in small animals, should be included in the protocol.

The recommendations were, interestingly, unanimous. This is extremely significant since the six-member TEC – one member recused himself immediately after it was announced in May this year –was set up by the Ministry of Environment and Forests – in response to a mandate of the Supreme Court which has been hearing a public interest petition seeking a ban on field trials of GM crops. The petition was filed by Aruna Rodrigues and others in 2005 and since then the apex court has taken several measures to bring about transparency and due process in the conduct of GM crop trials.

The scientists had heard the views of the petitioner, representatives of biotech industry, farmers and anti-GM activists before submitting their interim 24-page report.

Industry sources were unwilling to comment on the report, saying the matter was sub judice. However, sources conceded that if the recommendations were translated into orders by the Supreme Court, it would set back the development of GM crops in India for a very long time.

This is of equal consequence to public sector research in India since dozens of government laboratories are focused on GM research, specially related to BT genes, across a host of food crops .