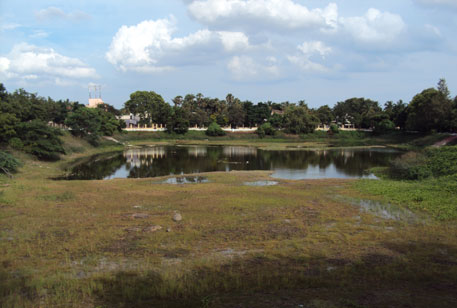 The onset of the north-east winter monsoon over south India heralds the arrival of the the float festival in Tamil Nadu, which is held just after rains cease. Idols of presiding temple deities are floated in the water tanks on rafts decked with flowers and flickering lamps. The tanks are usually attached to temples and occupy an important space in the state's cultural landscape.

But these tanks have another important role. “They are tools for recharging groundwater and absorbing floodwater,” says Madhavi Ganesan, associate professor at the Centre for Water Resources in Anna University in Chennai.

At present, Tamil Nadu has 2,359 temple tanks. Of these 55 per cent are in good condition, according to P Dhanapal, additional commissioner of the Hindu Religious and Charitable Endowments (HR & CE) Department, which monitors the tanks. Despite the monitoring, most tanks dry up in summer and a few are used to dump the city sewage, says S Indra Kumar, president of Home Exnora, a sister concern of the environmental service NGO, Exnora International. Kumar had taken the initiative to revive the Pammal tank next to the Akkieswaran (Siva) temple in Kanchipuram district, 30 km from Chennai. The non-profit took the help of area residents in 2000. The revival of the tank has improved the quality of the groundwater within a five kilometre radius of the tank (see 'How Pammal tank was revived).

The tank's revival can be model for restoring other tanks in the state. The fund can be raised by HR & CE, municipalities, panchayats and private trustees, says Ganesan. She adds that the government has to prepare an action plan and decide on arranging funds raising. Another key concern about the tanks is their maintenance. Chief minister J Jayalalithaa is actively promoting the restoration of temple tanks. The state government has instructed all district collectors to undertake restoration and rainwater harvesting of the temple tanks with the assistance of local body authorities says Dhanapal.

Most of the tanks had potable water a few decades back. But lack of awareness reduced many of them into garbage dumping sites, prone to encroachment. The inlets of the tanks, which carry rainwater from the surrounding catchment, are mostly clogged, making the tanks dry for most parts of the year. After few years, these dry tank beds become sites of development, explains Kumar. The most striking example is Thiruvallur district temple tank. The tank remained dry for many years and was  converted into a parking lot by the administration.

Why tanks are drying

One of the obstacles in reviving these tanks is that the authorities focus on restoring the tanks only for the float festival, without looking at its water recharging potential. Residents dump garbage into temple tanks without realising they are a source of water for them. Parking of vehicles and location of shops and urinals around temple tanks should be banned so that the water entering the tanks is unpolluted, says Ganesan. She adds that right now the inlets of the tanks are sealed off and they are merely used for storing water. All the departments are focusing on using the tanks for storing the rainwater and not concentrating on the maintenance of the inlets of these tanks which carry rainwater from the surrounding catchment areas.

There are also schemes underway to put concrete in the base of the temple tanks, which will hamper water recharge. Ganesan says the bed material of tanks should be alluvial soil, which will help retain rainwater and at the same time  recharge the groundwater in the surrounding area. A city like Chennai, which receives more than 1,200 mm of rain annually, can use these tanks as systems for harvesting rain. The rainwater that falls on the neighboring catchment area can be diverted through inlet pipes to these tanks.