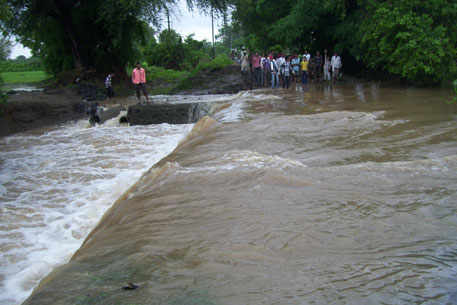 On the heels of the severe drought of 2012-13, several drought-ravaged districts of Maharashtra are now reeling under severe and unprecedented floods. By end of July, drought-prone districts like Buldhana, Akola, Washim, Amravati, and Yavatmal in western Vidarbha have received anywhere between 1.5 to 2 times the average rainfall. Many regions have also witnessed unprecedented intense rainfall episodes—300-400 mm rains within 24 hours.

At present, four drought-prone districts in western Vidarbha are experiencing flood conditions. In Yavatmal, known as the suicide capital of Maharashtra, helicopters had to be pressed into service to rescue some 450 people trapped in three villages. An estimated 350,000 hectares (ha) of residential and agricultural land is under water after as much as 1,970 cusecs of water was released from the district’s seven irrigation projects.

All rivers in the chronically drought-hit and water-scarce districts of Buldhana and Washim are in spate, causing extensive damage to kharif crops. In Buldhana, with the rivers Purna and Painganga swollen, many bridges and roads have been damaged, cutting off contact with several areas. Washim, no stranger to chronic water scarcity, unexpectedly received the highest rainfall in the Vidarbha region in June–457 mm, which is 164 per cent above normal. Between June 1 and today, the district has received 906.5 mm of rainfall – more than twice its average.

Drought-prone areas in the Central Maharashtra and Marathwada regions have also received higher than average rainfall. However, here excess rainfall ranges from 20-40 per cent (see table), and not much has been reported by way of floods.

The floods have caused extensive damage to both agriculture and civic amenities. At present, crops on an estimated 6-700,000 ha of agricultural land in Vidarbha have been damaged by the rains. Statewide, 237 deaths have been reported because of floods, out of which 112 are in Vidarbha. Some 3,800 houses have been completely destroyed by the rain, report sources.

The monsoon in the Vidarbha region this year has so far been characterized by intense rainfall episodes. On June 14, the Manora and Mangrulpir tehsils of Washim district experienced 374 mm of rain in a span of three hours, which caused intense flash-floods in this hilly region.  “This region had never witnessed such intense rains so early in the season,” says farmer activist from the area, Gajanan Amdabadkar. On July 23, Lonar tehsil in Buldhana district saw a whopping 419 mm of rain in a single night. On the same night, Gondpipri in Chandrapur district and Aheri in Gadchiroli district received 333 and 274 mm of rain. Earlier, on July 12, Bhamragadh in Gadchiroli had received 252 mm of rain. On July 30 and 31, the entire region received non-stop rain for 22 hours. Wardha district registered 325 mm rain while Nagpur city received 101.4 mm in 12 hours.

According to figures provided by the Regional Meteorological Centre (RMC), the Vidarbha region has already received 98 per cent of its annual average rainfall at the end of July. With two more months of monsoon yet to go and predictions of heavy rains to come, the figure is expected to rise steeply.