We can’t afford to lose farmers

It is time we talked about the real cost of our food, about how to benefit the farmers who grow our food 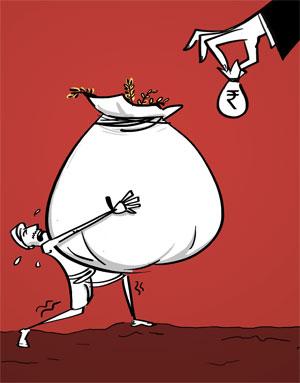 It took the tragic death of six farmers in Madhya Pradesh for the national media to report on the deep-rooted agricultural crisis. The farmers who were killed in police firing during protests were demanding that the government pay a higher minimum support price (MSP) for their crops. But it is not only in Madhya Pradesh that farmers are out in the streets. Agricultural unrest is worse in the more prosperous and productive regions, where the input cost of farming is higher and so is the debt. Farmers are bleeding. Enough is enough, they are saying.

The current crisis is about the problem of aplenty. The crop production this year has been good, but the farmers are in trouble because the glut means that the value of the crop has gone down. After seasons of bad yield (caused by rain failure or variable and extreme weather), this is the straw that breaks the camel’s back. The bumper crop could have helped them make good their losses and pay their loans. Their despair should make us act.

There are many issues here. First, how will the country pay higher prices for crops? We also need to keep the food inflation low because the high cost of food would make consumers unhappy. It is also a fact that India has a vast numbers of really poor people. The government’s food procurement— buying from farmers and providing it to people through the public distribution programme—keeps the country away from famine-like situations.

So the government is caught between a rock and a hard place. On one side are farmers who need to be paid the right price for growing food and on the other side are people (including thousands of farmers) who cannot afford expensive food. As yet, the policy has been to subsidise food, not pay farmers. That’s what MSP is all about.

The second challenge is how to price agricultural produces. For farmers MSP is an insurance against price volatility. But it is set for 22 food crops only. Of these crops, governments primarily procure paddy and wheat at MSP. But the MSP mechanism needs to be reworked. In fact, the costing of food needs to be reworked, indeed understood, in its totality. We know that input costs are reducing farmers’ earnings. We also know that farmers are faced with an increasingly variable weather, which leads to crop losses. So, we don’t know what investment a farmer makes to provide us food.

Governments and market economists argue that MSPs have increased over the years. They say, it is because of this increased cost of procurement that agricultural productivity has jumped. But they miss the fact that the cost of production cannot be computed only on the basis of how much money was spent to grow a particular crop. It has to take into account the enormous risks that farmers take, like the extreme variability of weather and freak events that destroy crops every year. Then why should the costing not include the cost of infrastructure required to grow food? Indian farmers invest huge amounts of private capital into building the infrastructure for their operations, unlike any private company or industry. They pay for building irrigation facilities—more than half of the irrigated land uses groundwater. Some 19 million wells and tube wells have been built with private capital.

This discussion on the cost of food must also take into account two deadly distortions. One is the difference between the price that a farmer is paid for his/her produce and the price at which consumers like you and me buy it. It is widely known and accepted that this gap is increasing. It is also known that this price disparity is due to a combination of factors, from restrictive laws over sale of agricultural products to lack of facilities and infrastructure for storage, transportation and direct sale to cut out intermediaries. This clearly needs to be the focus, if we want affordable food.

Don’t be fooled into thinking that other countries do not provide subsidy to farmers because of the provisions of the World Trade Organization. The name of the subsidy has changed—moved from the green box to amber or from direct to indirect—but not the reality. And don’t be fooled into thinking that our farmers are paid huge subsidies. The bulk of the so-called agricultural subsidies go to fertiliser companies so that they produce and sell fertilisers at cheap rates to farmers. The rest of the food subsidy, if we can call it that, is the purchase of food for distribution. So, there is an extremely unequal playing field out there. It needs to be understood. It is time we talked about the real cost of our food, about how to benefit the farmers who grow our food. This is not a business we can afford to lose.