WHO OWNS OUR VEGGIES? 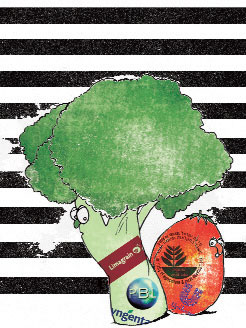 A so-called super broccoli, which has been developed by a British company with two to three times the level of glucoraphanin than the normal broccoli, has been given a European patent. And so has a tomato with reduced fruit water content. Both were developed using conventional cross-breeding methods and no genetic engineering was involved. Thereby, hangs a worrying issue.

Will this open the floodgates to the patenting of all our vegetables? After all, farmers across the world have been developing varieties through this method from time immemorial and none of them has sought to patent the results of their experiments. And the law in most countries does not allow the patenting of plants produced through conventional crossbreeding. The super broccoli called Beneforté, a hybrid of a traditional British broccoli crossed with a wild, Sicilian variety, was developed by Plant Biosciences. It is already selling in the US and in the Marks and Spencers stores in the UK as a “medicine chest” because glucoraphanin has been linked to lower rates of heart disease and is said to fight some cancers while boosting the body’s supply of antioxidant enzymes. The tomato patent, awarded to the Israeli Ministry of Agriculture, relates to a method for producing tomatoes with reduced water content and to any products using that method.

The patents, interestingly, were granted almost nine years ago. So readers might well ask what the current brouhaha is about. The European Patent Office (EPO) decision, however, has been challenged and has been winding its way through the labyrinth of appeal boards, technical boards and the hearings of the Enlarged Board of Appeal (EBA). The broccoli patent was opposed by Limagrain, a France-based international agriculture cooperative, and the Swiss biotech giant Syngenta, while Unilever, one of the largest food and consumer products companies in the world, had complained about the Israeli tomato patent.

Limagrain and Syngenta had alleged that the patent was given to a biological method of breeding plants excluded from patentability under the European Patent Convention (EPC) and binding on the EPO. The technical board of appeal stayed the proceedings and referred the complaints to EBA to obtain a clarification of the term “essentially biological processes for the production of plants (or animals)” and the associated exception to patentability.

EBA, the final body of appeal, was categorical that “the production of plants which comprise conventional breeding steps as well as technical ones are not patentable”. In its December 9, 2010, ruling, the board concludes that “a process for the production of plants involving sexually crossing whole plant genomes, and the subsequent selection of plants is not patentable”. In fact, “the mere inclusion of a technical step which serves to enable or assist the sexual crossing of the whole genomes of plants, or of subsequently selecting plants does not override this exclusion from patentability”. For good measure, it added that while technical devices or means, such as genetic markers, may themselves be patentable, their use does not make an essentially biological process patentable.

However, this is where the patent trail took an unexpected turn. The technical board of appeal cancelled the hearing scheduled for October 26 after Plant Biosciences amended its patent, deleting all claims on the breeding methods and limiting it only to the broccoli plant bred by those methods. As a result, Limagrain and Syngenta withdrew their opposition, paving the way for the patent to stand.

What is curious about this battle is that multinational biotech and food companies were on the same side as a couple of hundred activist organisations, farmers’ groups and politicians opposed to the patenting of plants.

There have been fairly large protests on and off against such patents and on October 26 around 300 people held a noisy demonstration outside EPO in Munich. They were questioning the patenting of the items of daily subsistence and the “inadequate wording” of the law which ensured that any legal challenge is bound to fail. The law, therefore, had to be changed to protect the interests of consumers, farmers and breeders.

A major worry is the impact of such patents on global food prices and developing countries. The super broccoli costs about a third more than regular broccoli and is doing well because it is marketed as a natural way of preventing cancer.

Caveat emptor: Although broccoli is the only known vegetable to contain meaningful quantities of glucoraphanin, experts have warned about the potentially harmful effects of eating concentrated and unregulated amounts of this nutrient.

This is because glucoraphanin breaks down into a number of potentially toxic products that can have grave unintended consequences. Patents bring medical worries, too.