These vehicles play a significant role in enhancing last-mile connectivity and improving the city’s air quality. However, several initiatives need to be taken to plug loopholes in this sector

I interned at the Centre for Science and Environment (CSE), New Delhi, for a period of 3 weeks in April-May 2018 and researched on "Electric Mobility for Intermediate Para Transit.” My research was focused on Delhi’s non-polluting electric rickshaws (e-rickshaws).

Here, I present a case study about e-rickshaws in Delhi based on my personal experience of witnessing this sector closely. The purpose of this study is to analyse the current situation of this sector, the problems it encounters, and the steps/strategies needed for its improvement.

E-rickshaws are non-polluting vehicles. Replacing conventional vehicles (such as auto-rickshaws) with e-rickshaws can significantly improve the air quality in Delhi. The e-rickshaw system in Delhi is still in its nascent stage and needs a major improvement in infrastructure. There are no e-rickshaw parking stands or charging spots provided by the government. The drivers have limited income streams and say that they are only able to earn enough to survive. They are not allowed on the main roads and many a times, their vehicles are confiscated.

During my field work, I collated data by personally interviewing various parties: 22 e-rickshaws drivers, commuters travelling in them, the owner of a private charging station, and an e-rickshaw dealer (across 4 locations—Govindpuri, Harkesh Nagar, Jasola, and Sarita Vihar).

Most of the e-rickshaw drivers I interviewed owned their own vehicles. Of the 22 drivers, 19 owned their vehicles, while 3 operated their vehicles on rent. The approximate rent was Rs. 300-400 a day. It must be noted that there were a variety of e-rickshaws of different makes plying on these spots, and they had physical as well as slight technological differences. However, across the respondents, the following trends were noticed:

Most of the drivers were men. I only came across one female driver. I asked each driver to rate his or her happiness with the current situation on a scale from 1 to 5 (1 being the least happy and 5 being the happiest). The average of all the drivers was found to be 3.23. Many of the e-rickshaw drivers felt proud of driving vehicles that did not contribute to air pollution. 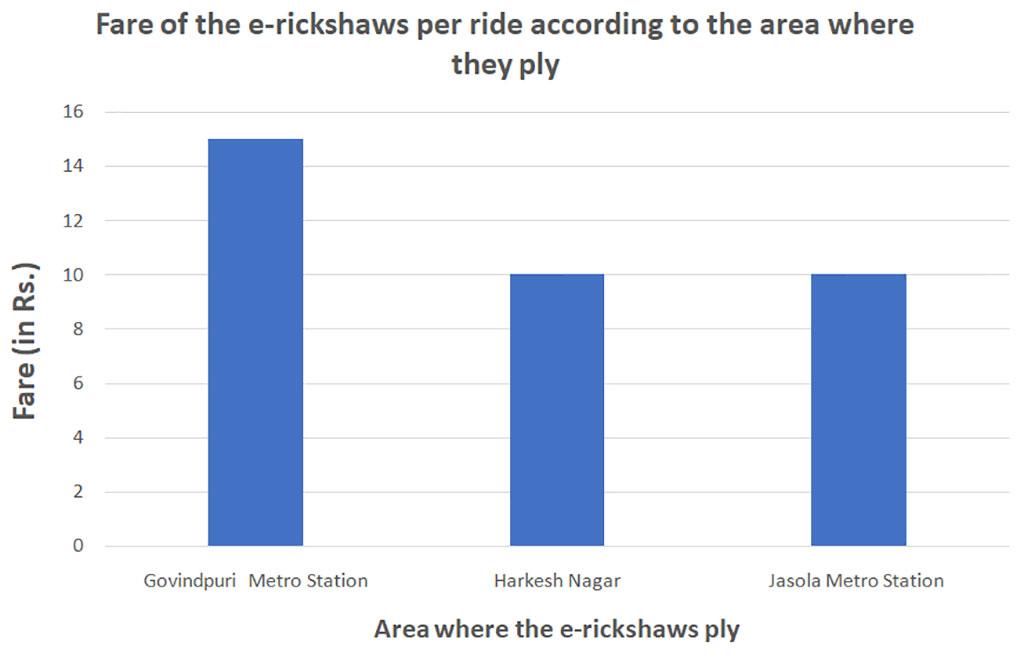 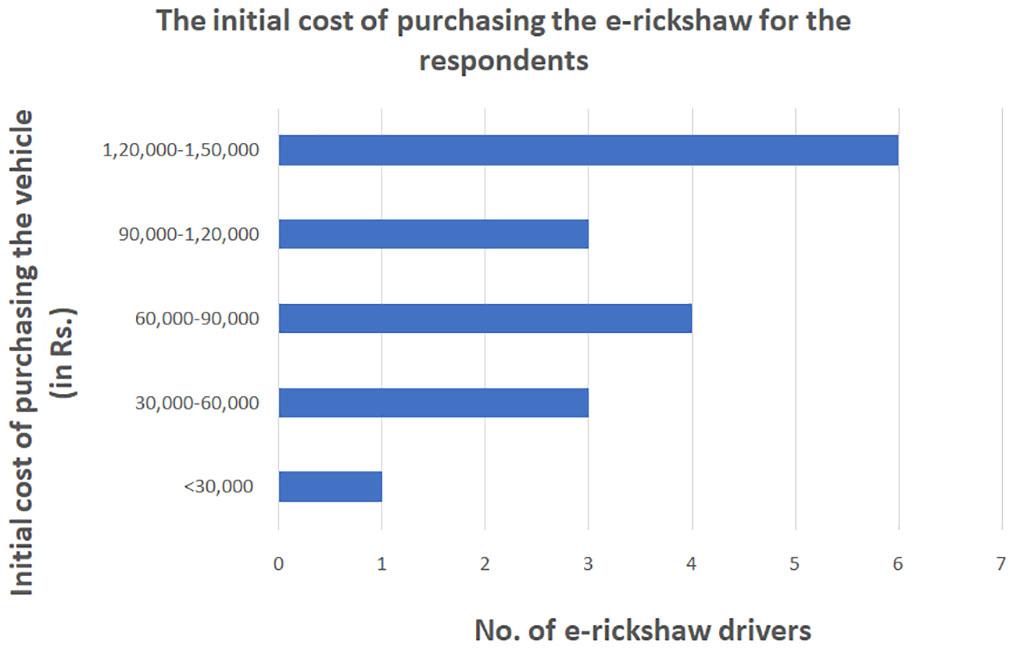 The fare of the e-rickshaw is decided according to the area and remains fixed in that area for all drivers.

The following SWOT table gives an overview of the situation of electric rickshaws in Delhi:

The lack of sufficient charging facilities seemed to be a major problem for most of the e-rickshaw drivers. Thirteen out of the 22 drivers explicitly stated charging to be a major cause of concern. Many want the government to introduce charging spots and want faster charging facilities. “I want the introduction of a fast-charging system. I want the battery to get charged while I eat my lunch,” says S. K. Mirajul at Govindpuri Metro Station. Raj Kumar Singh at Harkesh Nagar Metro Station on being asked about the measures to be taken for e-rickshaws, said, “I want to see an improvement in the charging facilities. I want charging points to be introduced. Something like battery swapping will be very helpful.”

There are still no proper charging facilities set up by the government. Out of the twenty-two e-rickshaw drivers interviewed, seven charged their vehicle at local food or goods shops and paid the owner of the shop on a daily or monthly basis. Eleven of the drivers charged the vehicles at their house with the available electricity. Two drivers charged their vehicles at a parking place, one charged at someone else’s house, and one charged at a private charging station recently introduced.

Most of the drivers charged their vehicles twice a day, the entire night and a few hours in the afternoon during lunchtime. The cost of charging varied for the drivers of different locations. The cost is generally Rs. 120 a day for charging at a local shop and Rs. 30 a day for charging at one’s own house. On an average, the e-rickshaw drivers charged their vehicle for 8-10 hours at night and 2-3 hours in the afternoon. This charge usually lasts for around 70 kilometres.

I interviewed the owner of the private parking station located in Jasola, New Delhi. The owner, Vinod Kumar Bidhuri, has a large piece of land where he keeps one guard for the security and charging of the e-rickshaws. In the corner of his land, he has made a covered space with 50 charging spots for e-rickshaw drivers to charge their vehicles at Rs. 80 a day, for any number of hours. The e-rickshaw drivers generally charge their vehicle twice a day, for a total of 10-12 hours. When asked about battery swapping, Bidhuri said he will be willing to provide such facilities to the drivers and wants to take initiatives to improve the situation of e-rickshaws in Delhi. 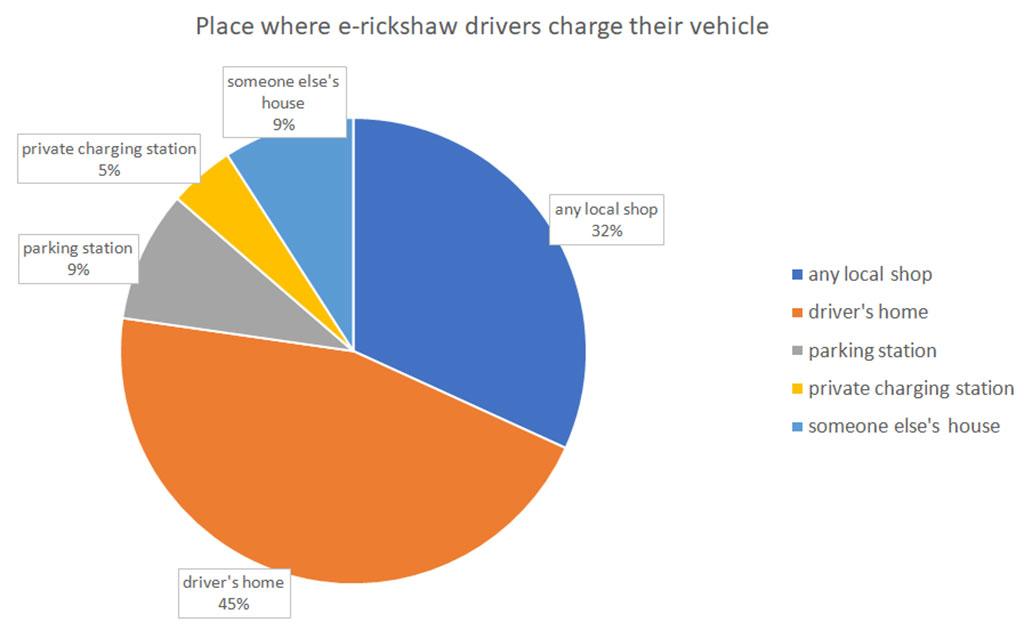 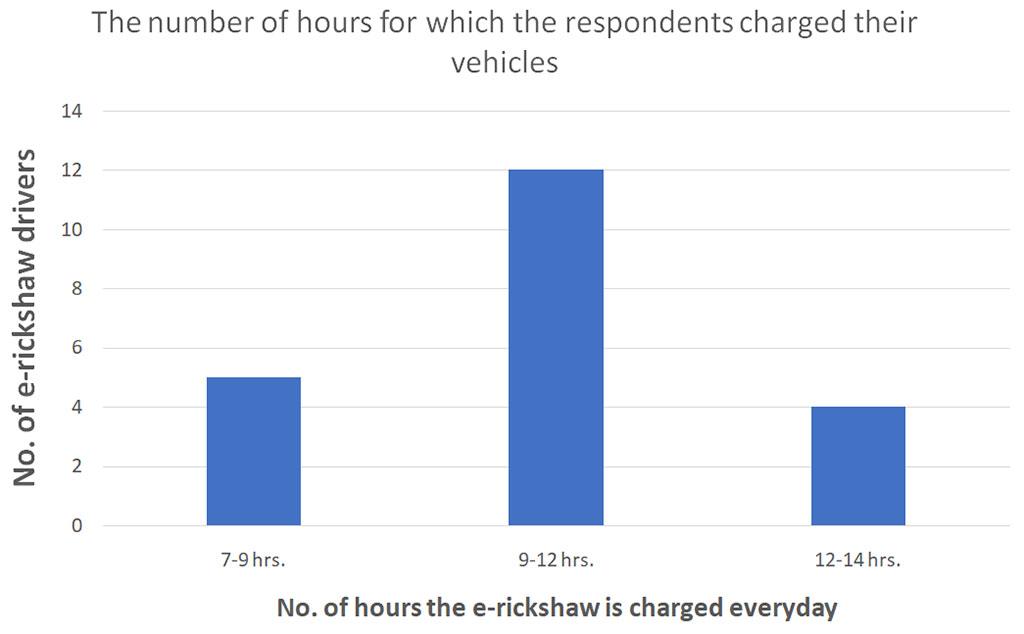 The average number of hours for which the e-rickshaw drivers charged their vehicle = 10.35 hours

In such a scenario, the government needs to introduce parking stands at the earliest to deal with the grievances of these drivers and improve the infrastructure for e-rickshaws.

None of the e-rickshaw drivers were aware of the different kinds of battery options available in the market—lead-acid or lithium-ion batteries. On being told about the lithium-ion battery, most of them felt there wasn’t any point for the battery to be so expensive as none of them could afford it, even if it lasted longer. One of the drivers knew about a battery that lasted longer, but he didn’t know the name. Another one had some knowledge about super-capacitor charging. Very few drivers felt the high prices of the lithium-ion battery were justified, given its benefits.

Why do they drive e-rickshaws

Challenges faced and measures to be taken

The most significant challenges were related to the charging facilities, the parking facilities, and the traffic police. The charging infrastructure is weakly developed and needs enormous improvement. There are no proper parking stands, which causes serious concerns for these drivers, for example, having to sleep on their vehicles. The need of the hour is to introduce charging stations and e-rickshaw parking stands all across the city. The drivers say that the police frequently catch them and fine them. Sometimes even their vehicles are confiscated. The problem here is that the drivers are not told about the routes they are allowed to travel on and the routes they are restricted on. The routes for e-rickshaw drivers need to be increased and they should be properly instructed about these routes.

The problem faced by the commuters of e-rickshaws is related to the rash-driving by the drivers. The commuters sometimes feel these vehicles are not exactly safe. This is a cause and effect of the illegal vehicles on the roads. A large number of the e-rickshaw drivers, eight  of the drivers I interviewed, did not have a number plate or a license. One of the drivers was even underage and another was physically challenged, and legally not allowed to drive the vehicle. Proper registration of the vehicles needs to be introduced by the government and the cost of registration needs to be reduced. Many of the drivers feel that illegal driving is a major cause of concern. Bikram Kumar at Harkesh Nagar said, “Someone else commits crimes and we have to pay the cost. There are a large number of underage drivers and there are also cases of drunk driving. It is due to these drivers that the police do not allow us on the main roads. Proper enforcement needs to be introduced.”

The e-rickshaws in Delhi play a significant role in enhancing last mile connectivity and are essential for improving the condition of our city’s air quality. However, there are still several loopholes in this sector and several initiatives need to be taken by the government to improve the sector.