The river Ami in district Gorakhpur, once known for its water that tasted as sweet as mangoes is today a receptacle of filth, sewage and industrial effluents, reports Bharat Lal Seth 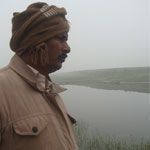 I recently spent a day interacting with people residing near the banks of the river Ami in Gorakhpur district. A lesser known rivulet, the Hindi belt may have read couplets of Sant Kabir Das referring to the Ami lovingly as Ammiya; his samadhi (mausoleum) is on the banks of the river at a nagariya named after him. Sikh guru Nanak Devji, during his travels, is said to have enjoyed his rest on its banks. While much earlier, young Siddhartha is said to have shed his princely clothes for seer like robes after he crossed the river, to spread the word as the Buddha.

The river, 136 km in serpentine length, has more than 200 villages and a few towns located on its east and west bank. Some say that the name Ami stems from the word amrit (nectar). Others who fondly recall drinking the river water say that its name is simply drawn from the fact that its waters were once considered as sweet as an aam or mangoes. With Ami as the enabler, more than three lakh people, mostly fishers and farmers living in Ami’s 522 sq km catchment were once a blessed lot with bountiful agricultural produce and fish catch, if one is to go by anecdotes of village elders.

But the Ami is no longer an asset; a lot has changed since the Guru's nap and the time when Kabir wrote his couplets. Today the river is a receptacle for all the filth, untreated sewage, and worst of all, the noxious effluents from isolated large industries and GIDA, an industrial township in Gorakhpur district.

A quick travel advisory: Gorakhpur is filthy; my science editor was surprised at my eagerness to get there when my travel was approved. I grew up listening to my old man talking of his trips to this godforsaken town, and how it never failed to match up to the turn of phrase, Gorakh dhanda, or shady racket, as he translates. So let’s just say a lingering case of childhood curiosity: how shady could it be?

My contact in Gorakhpur was Vishwa Vijay Singh, an activist spearheading the Save the Ami movement. Since 2009, he has been active in organising rallies and even undertook a padyatra along the entire course of the river. In 2010, he told me that he happened to meet Congress leader Digvijay Singh on a reconnaissance tour for Rahul Gandhi. So in July, 2011 when Gandhi visited the area, Vishwa Vijay took him to a village to show the polluted Ami river. Gandhi spent more than half an hour in a village and was briefed on the profile of polluting industries and the Sariya drain, which carries untreated industrial effluents. Impressed with his drive, Gandhi picked Vishwa Vijay to fight the 2012 assembly elections from Sahjanwa constituency. “This is the first time somebody is getting a ticket to fight elections based on his work to save a river,” he told me. He accepted the offer in the hope of achieving more as a political insider. 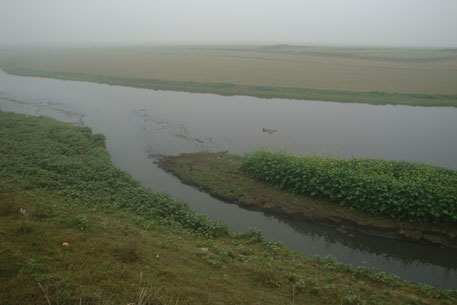 Vishwa Vijay, busy preparing for upcoming elections, set up an early morning meeting with Indra Pal Singh, 45, pradhan (village chief) of Adilapar, who showed me around. His village has the distinction of being located near the outfall of the notorious Sariya drain. As you approach, the untreated nature of the effluent is palpable. “This is nothing,” Singh tells me; around midnight the drain swells as more effluent is clandestinely discharged. Factories locked on the outside, resume operations as pollution control board officials turn a blind eye, with  orders from the top brass at Lucknow.

In the early 1990s, the quality of river water, downstream of the Sariya drain, began to affect more than 100 habitations. People's health in the region worsened and the time-line suggested industry was the culprit. Slowly people’s immunity weakened and the medical business grew by leaps and bounds. Indra Pal Singh points to a neem-hakim (quack) riding a bicycle. They roam from village to village carrying relief medication, he tells me. They are a despised lot, often making more than Rs 2,000 each day. Villagers have little choice but to seek some comfort from these mobile pharmacies as they suffer from colds, coughs, fever, nausea and frequent bouts of high blood pressure. Indra Pal shows me water samples from shallow hand pumps which are not potable anymore.

While riding through town on cycle-rickshaw I'd often test, and rarely fail to count one in every five stores or establishments as either a medical store, clinic or pathology laboratory. Companies now specifically market water purifiers as a preventive to mystery fever outbreaks, often reported in the district.

Many are convinced that Gandhi's visit has put a lot of pressure on the state pollution control board to act. Jairam Ramesh, former Union environment minister earlier in the year wrote a letter to the chief minister. With no response on the matter, he directed the Central Pollution Control Board to send a team to investigate the matter. The report zeroed in on the polluting units. Acting on a tip-off the units discontinued operations, but the team managed to get some wastewater samples. They also took river water samples; the lab results suggest the same as a cursory glance: the river is of the worst water quality classification.

But in spite of the high pollution levels, the Ami river is not a part of any pollution abatement programme of the national river conservation directorate of the environment ministry. Area residents are however hopeful as news has trickled that Jayanthi Natarajan, the present environment minister, is looking in to the matter. The ministry is insisting that the industrial township set up a common effluent treatment plant, something it committed to do in 1989 when it was set up.