There has been an animated debate in the past three years over the supply of food in the ICDS (Integrated Child Development Services) programme. Supplementary nutrition has been provided to all children under the age of six since the inception of the programme more than three decades ago. This was done with the recognition that the nutrition gap (between what children should be consuming every day and what they actually have) is more than 500 calories. This is one of the reasons for the high incidence of child malnutrition in India: 46 per cent. This is double the malnutrition rate of sub-Saharan Africa, and has registered a mere 1 per cent decline between 1999 and 2006. The fact that this rate of child malnutrition persists in the second fastest growing economy makes it all the more inexcusable. 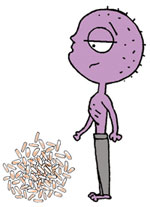 Till a few years ago, the entire supplementary nutrition programme was borne by the state government. States were, therefore, given the freedom to decide on the mode of procurement and distribution of food in the ICDS centres. Barring a few notable ex ceptions, most states used private contractors to procure and distribute food. The quality was greatly compromised and more often than not food did not reach the ICDS centres.

It was well known that contracts were given to private players who greased the system. The politician-bureaucrat- contractor nexus was established.

This led to the Supreme Court order of October 7, 2004, banning the participation of private contractors in the programme and directing that funds for supplementary nutrition be given to mahila mandals, women's self-help gro ups and village communities. The logic of the move was fairly simple. Feeding children was not rocket science, and surely communities would be able to provide hot, cooked meals to children. Besides, decentralization of the funds would allow communities to keep a closer watch on the food being provided at the ICDS centres, and, indeed, increase their participation in the programme.

It would also allow communities to make culturally appropriate food choices. In any case, a hot, cooked meal was already being provided in government and government-aided primary schools on the directions of the Supreme Court. It could be replicated in ICDS.

The Supreme Court order was deeply resisted by the political class cutting across party lines as well as by the vested interests within the bureaucracy. Universalization of ICDS has doubled the number of ICDS centres across the country. This has also substantially increased the budget allocated to supplementary feeding, thereby incr easing the stakes in the programme for vested interests.

For the past three years, the Supreme Court commission ers' office and the Right To Food campaign have been persuading state governments to effectively decentralize the funds for the supplementary nutrition programme. The Supreme Court has also passed interim orders to ensure compliance.

Despite unambiguous orders from the Supreme Court and a Cabinet decision in 2009, many states continue to use contractors for providing supplementary nutrition. These states include Gujarat, Uttar Pradesh, Assam, Nagaland and Madhya Pradesh. In many states where provisioning of meals has been delegated to village self-help groups, the problems of giving them money on time and clearing their dues remain the biggest bottlenecks.

Ensuring decentralization in the spi - rit of the Supreme Court orders remains a significant challenge for ICDS.