Weather is 2017 person of the year

The biggest headline of 2017 is not deadly air pollution, but the catastrophe of weather changes that are bringing distress across India’s rural areas 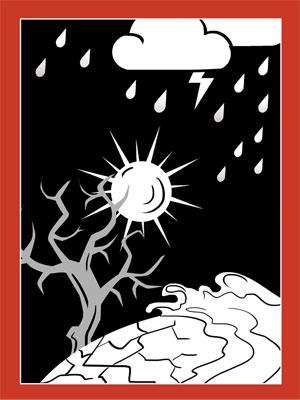 But this “weather” headline has been lost in the cacophony of our news. We don’t get to read this often enough because of three reasons. One, because the change is not yet recognised; scientists who measure weather are still uncertain and tentative of the world around them. They want to play safe. Two, because we have no way of listening to voices that are not established and based on so-called “good science”. In this way, the view of the farmers who are seeing change happening is dismissed; or just not heard.

Then there is the fact that they don’t know the fancy word of climate change. For them weather is weather and it is changing for the worse. Three, we do not hear this headline often because it only screams when it affects the cities, the middle-classes or when farmers have to die or something really severe has to happen before it makes it to news. This news is about everyday events—the gradual change that we are seeing. This news is about remote places and people. This news is not our news.

But it needs to be. This is why, in my view, the biggest headline of 2017 is not the toxic and deadly air pollution in our cities—which is bad, very bad. But it is not half as bad as the catastrophe of weather changes that are bringing widespread human grief and distress across India’s rural areas.

It is time that policy recognised the strife and understood that this is about a new normal—a normal where nature has turned against people. This “normal” is because we have abused nature; burnt fossil fuels to build our economies and our wealth and that these emissions have today turned weather to be different and devastating.

So, 2017 is about the contradictions that will plague us more and more in 2018. Consider how in some parts of the country, the agrarian crisis was about plenty as crop production was good. But farmers were still in trouble. Why? Because the glut meant that there was no value for their crop. But this was not only a story of plenty. The fact is that this “plenty” came after seasons of bad yield, because of rain-failure; or variable and extreme weather. This is why it was the proverbial last straw that broke the camel’s back. After many seasons of despair, farmers finally got a bumper crop; they could have made good their losses and paid back their loans. But now there was no price for their produce.

This is not an anomaly. The anomaly is the new normal.

Today, it is our tragedy that our farmers are the victims of two global processes—call them the true “foreign hands”. One, the failure of the climate change negotiations to mitigate emissions at a scale and pace that would not impact the world’s poorest. Two, the failure of the global trade negotiations to give the poorest and the most marginalised of the world a fair deal. Instead, global trade regimes have painted them as a hindrance to global fair trade practices.

Our real tragedy is that we have lost our voice. We cannot even take these issues to the global stage and argue our case. The question is why. It is because the global media is out of our reach—the bubble world is about its own intolerance and its own positions. It has no place for positions that come from out of this space. It is because our research is inadequate. The social media created news space ensures that these inconvenient stories do not make it to our world. It is time in 2018 we discussed this challenge.

This is not to say that urban India is not similarly affected by either weather changes or pollution. There is no urban and rural divide in this matter. But what is clear is that the urban crisis—of everything from housing, water, sewage, garbage and of course pollution—will only increase the rural crisis. As the agrarian crisis exacerbates—because of weather and all the other things that we do not do to fix it—people will move to cities in search of employment. The rural and urban is conjoined. There is no divide. This is the challenge of 2018.