The twin sword of technology 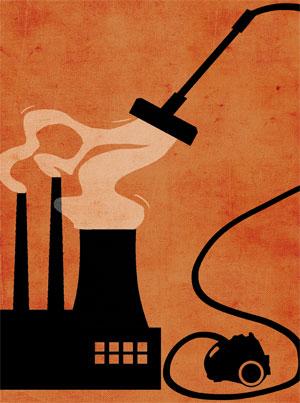 When politics disappoints, technology walks in. So when some scientists warned that the proposed emission cuts under the Paris climate deal would fall short of the 20 target (NASA climate scientist James Hansen called it a “fraud”), many people began arguing that it would be impossible to avert a climate calamity without the help of technological fixes such as plucking carbon from the air and locking it away in places where they would stay, presumably, for centuries.

Later this year, a Swiss company called Climaworks will commission the world’s first commercial plant near Zurich that will tap carbon dioxide directly from air and pipe it to a greenhouse as fuel for veggies. But the trouble is trapping carbon from open air doesn’t come cheap. Even after scaling it up, it is estimated, it would cost US $600 per tonne of CO2, which is even more expensive than capturing it in industrial facilities like coal-fired power plants, where carbon is three times denser. The only advantage of this new open climate surgery is that you can do it anywhere. Besides, you don’t have to incur the expense and risk of storing it in a vault.

Carbon capture and storage, or CCS as it is commonly referred to, has been in the eye of the storm ever since the Norwegian oil and gas company Statoil broached the idea in the early 1990s. It continues to be plagued by ballooning costs and lack of international support. While some projects are under construction, there is only one, in Canada, that is run on a commercial scale, again not without hiccups.

But Norway is by far the greatest champion of CCS. And not without good reason. Even though it depends on hydropower for almost all its power needs, it is, ironically, the world’s third largest exporter of oil and gas. In a morally perverse sense, it justifies its wealth from fossil fuel exports by embracing renewables at home. No wonder then that Power Norway, the state utility, has pumped several billion kroner in CCS to decarbonise its oil and gas plants. But most of that money has gone up in smoke, thanks largely to delays and mounting costs—plucking carbon eats up about 40 per cent more energy to capture about 85 per cent of the CO2 a plant produces. The much-touted and highly subsidised CCS plant built for a Statoil gas plant is one of the biggest white elephants created in the country.

Storing carbon in deep subterranean vaults poses its own share of problems. For instance, Norwegian cement and gas companies have washed their hands of any liability in case of an accident or leakage from the storage site—most of them abandoned mines located near settlements. This raises numerous prickly, ethical and political dilemmas about public liability, just as in the case of nuclear power plants.

But even if CCS becomes viable and the risks are taken care of, many environmentalists ridicule it as a cop-out or a subterfuge on the part of the fossil fuel industry. Worse still, it takes away the focus, not to mention resources, from renewables, the future of clean energy.

More often than not, engineering solutions like CCS create risks that necessitate even more ingenious fixes. For instance, reverse osmosis (RO)-based water purifiers were developed to solve the problem of polluted water because governments failed to provide safe drinking water. It turns out that RO purifiers throw out the baby of good nutrients with the bathwater of pollutants. So now many RO systems come bundled with what are called ionisers that restore the good nutrients back to the water! This might be good for the economy, but it is certainly a perverse one. That said, if a political roadmap to a secure climate future is not found soon, technology will keep upstaging politics and posing even more difficult dilemmas.