Disposal of plastics is difficult. This drawback weighs heavy against the numerous advantages of the material 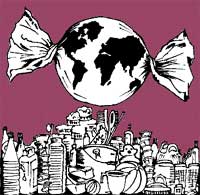 due to their non-biodegradable nature, plastics -- the most popular packaging material -- have come under attack. There is an anti-plastic attitude in many countries and usa , Japan and Germany are studying the hazards of plastics.

Plastic bags do not disintegrate when thrown away. They block the sewage affecting health and hygiene. They accumulate all over the streets, roads, public places, and can remain in the ground for as many as 400 years, thus preventing water from seeping into the soil and obstructing photosynthesis and air circulation. The soil productivity is retarded and vegetation is affected adversely. That is not all. Many stray animals and cattle can die after consuming these polybags. Polythene bags wreaked havoc in 1996 in Italy, killing sea turtles, dolphins and many marine creatures.

An option to get rid of plastics is to burn them. However, incineration of plastics produces deadly gases like chlorinated dibenzofurans ( cdfs ), chlorinated dibenzodioxins ( cdds ), hydrochloric acid gas, sulphur dioxide and cholorofluorocarbons ( cfcs ). These gases cause alarming environmental imbalance and deplete the ozone layer as well.

Degradation of plastics by putting them in a landfill is possible. However, this method is complex and does not guarantee complete success. Bacteria do not attack and eat the plastics rightaway. By the time they do so, plastics may have damaged the soil to a large extent. Another method, photo-degradation, requires chemical additives and so it may create more pollution contributing to the very problem it was meant to solve.

Since disposal of plastics has emerged as a major problem in developed nations, they are dumping their plastic trash in the Third World, where per capita consumption of plastics is still quite low. Greenpeace, a global non-governmental organisation ( ngo ), revealed that at least 95,000 tonnes of household plastic waste has been shipped to North Korea from Germany since 1994. Import in the form of plastic waste is on the rise in India. There are no checks on the waste containing dangerous substances that go into the making of baby toys or jars.

In spite of all these complexities, there is no gainsaying the fact that plastic has an edge over conventional material like metals, rubber, cotton, wood and glass, which are valuable and scarce. Besides, the mechanical strength of metals, the clarity of glass, and the aesthetics of wood, plastics also offer characteristics like light weight, non-breakability, energy efficiency coupled with a faster rate of production and more design flexibility.

At present, the plastic industry contributes directly to the national exchequer. Revenue generation from major commodity-plastics by way of customs duty and excise duty is about Rs 2,000 crore. It is estimated that the exports will skyrocket to Rs 12,000 crore by the turn of this century thereby increasing the country's foreign exchange earnings. The industry registered business worth Rs 150 billion at the Plastindia '97.

With the increasing purchasing power of the burgeoning Indian middle class, the domestic demand for plastic will also escalate. No wonder all plastic industrialists are setting their eyes on India (and Asia Pacific). Around Rs 28,900 crore is also being invested by the Indian public and private sectors to produce basic petrochemical raw material used for producing plastics. Till now, India has not faced the problem of plastic disposal as fiercely as the West has. This is because in India, plastic consumption has just begun.

While industry experts maintain that plastics are the material of the future, the environmental campaign to ban it has taken deep root in many countries.

The question that has no immediate and clear answer is---Is the use of plastic safe and healthy for our future generations? Intricacies do prevail regarding the plastic puzzle. At the macrolevel nothing seems wrong with plastics and one tends to think that the environmental problem due to plastics is not as grave as it is made out to be. But from the micro level the real picture emerges and the grim reality of plastic pestilence is frightening.

Tirtho Banerjee is a journalist based in Lucknow.