Amid promises galore by the Aam Aadmi Party , it becomes necessary to examine how it will implement its demanding manifesto and how environmental concerns will figure on its agenda

Amid promises galore by the Aam Aadmi Party, it becomes necessary to examine how it will implement its demanding manifesto and how environmental concerns will figure on its agenda 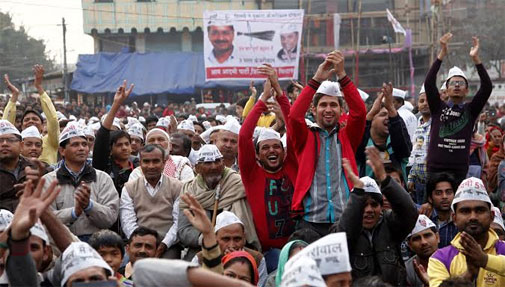 After almost a year without a government, Delhi is on the road to having one. The Delhi elections are significant in more ways than one. BJP’s defeat—as is clear from the latest leads—could check the Narendra Modi juggernaut, and give out important signals for states going to the hustings in the coming months. Bihar goes to the polls in November and West Bengal, Tamil Nadu, Kerala, Assam and Puducherry will witness elections in mid-2016. These states are not BJP strongholds. But the party has been trying to up the ante here. A defeat in Delhi could prove to be a spanner in its works.

That apart, a defeat for the party at the Centre is likely to be seen as a rejection of its pro-industry stance. Ever since assuming power, the Narendra Modi government has taken an industry-first approach. It had either reversed or had given clear indications of reversing some of the welfarist schemes of its predecessor—which, to be fair, had almost become exercises in tokenism in the last few years of the UPA government.

But will a rejection of both the biggies—the BJP and Congress—infuse fresh blood in the polity? The Aam Admi Party’s stress on probity and its emphasis on mohalla sabhas might well revive local level institutions and give a fillip to resolution of local issues. But the party leaders have so far not shown any foresight on environmental matters. Indeed, the party has been unequivocal in its rejection of the BRT. It has hardly anything new to offer on curbing Yamuna’s pollution. The party promises cheap electricity and cheap water. Where will this come from? Will Delhi get its resources at the cost of other states? The government of the national capital should rise above narrow considerations. Delhi cannot prosper at the cost of Himachal Pradesh or Uttarakhand. Delhi draws people from all parts of the country. Even enlightened self-interest demands that it take the interest of other states into consideration.

Does Delhi’s new political class have it in itself to be far-sighted? Times will tell.