Did our ancestors fly airplanes?

Did Indians fly airplanes, carry out stem cell research and even use hi-tech super weapons 5,000-7,000 years ago? Epics such as the Mahabharata and Ramayana have been considered as a proof for these assertions by recently appointed chief of Indian Council of Historical Research, Y Sudershan Rao.

A little research brought me to a paper published by Indian Institute of Science (IISc) in Bengaluru way back in 1974 on the origins of a treatise called Vaimanika Shastra. The treatise consists of eight different kinds of ‘ancient aircraft’, which could use solar rays, electrical energy, energy of stars, and, in some cases, even mercury to propel flying machines heaven-wards. Some of these aircraft are cylindrical-shaped and some shaped like cigars. The paper published by IISc analysed these inventions and considered all of them as impractical and non-feasible for flight because they did not adhere to basic principles of physics. This treatise has an interesting history.

The treatise appeared mysteriously in 1904, one year after the  Wright brothers flew an airplane on December 17, 1903. Even more astonishing is this claim by many supporters of this theory that in 1895 a test flight was organised on Chowpatty beach Mumbai in 1895 by Shivkar Talpade. Two articles, in the Deccan Herald and The Times of India, also talk about this flight that climbed a height of 1,500 metre. The articles were published in 2003 to celebrate 100 years of airplanes. These articles cite sources such as D K Kanjilal's 1985 work, Vimana in Ancient India: Aeroplanes Or Flying Machines in Ancient India, and some articles by Marathi and Gujarati newspapers of that time.

Talpade named his airplane as Marutsakha, borrowing the principles from Vaimanika Shastra, which he claimed had been written in Vedic times and forms a part of Rig Veda. Some of these articles also name Maharaja of Baroda, Sir Sayajirao Gaekwad, among the witnesses of this flight in Chowpatty beach. Whether the plane really took off has been a subject of debate. Some say it was an unmanned flight, others say that Talpade flew the plane, while another story says the plane just stood there and never took flight. 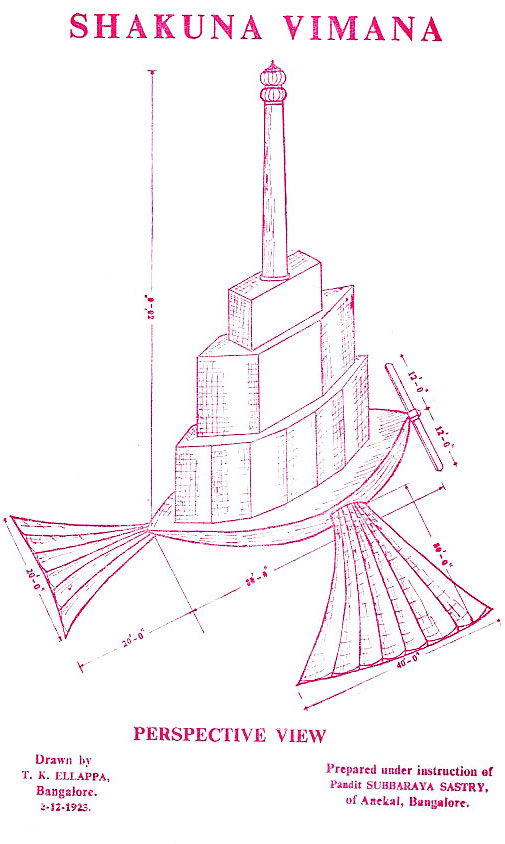 Kanjilal and many of these articles that appeared during this time say that Talpade was a student of one Pandit Subbaraya Shastry, who is said to have learnt the ancient art of plane-making from an ascetic near Kolar in Karnataka. Later, when Shastry returned to his village near Pune, he asked a trainee engineering draughtsman called T K Ellapa in Mumbai to make drawings of these vehicles between 1900 and 1904. Further, Shastry roped in one G V Sharma, a local priest, to put the instructions in manuscript form. Shastry claimed that these were the teachings of Bharadwaja, an ancient sage who is considered the head of one seven Brahmin family clans–a claim which is only based on textual references and yet to be factually established.

Yet another account says that in 1878, Dayanand Saraswati, founder of the Arya Samaj, wrote a verse indicating the existence of these planes in his work titled Rigveda Bhasya Bhumika. The verses can be roughly translated thus: “…going from one island to another with these craft in three days and nights….Just as intelligent people constructed ships to cross oceans….. jumping into space speedily with a craft using fire and water…..containing 12 stamghas (pillars), one wheel, three machines, 300 pivots, and 60 instruments.”

It is believed that there are four versions of Vaimanika Shastra. IISc considered two of these versions that appeared between 1959 and 1974. The first one was published by Delhi-based Sarvadeshik Arya Pratinidhi Sabha, which has a yoga guru, Brahmamuni Parivrajaka, as its author, and the book goes by the name of Brihad Vimana Shastra. It consists of Sanskrit verses and its Hindi translations. The Vaimanaka Shatra was published both in Hindi and English in 1973 by Gujarat-based V S Joyser, who later became director of International Sanskrit Research Academy. Incidentally, the English version had drawings by Shastry’s pupil Ellappa, while both the books maintain that the ancient aeronautical sutra was revealed only to Shastry while he was living with an ascetic. While Parivrajaka’s manuscript lies in the Oriental Library of Pune, Joyser’s manuscript is said to be in the Oriental Library of M S University of Baroda. Both the institutions could not confirm the existence of these books to this correspondent.

Shastry’s story in itself seems out of a fairytale book. Born in Hosur under the erstwhile Madras state in the 1860s to a farming family, he was married off at the age of eight. To support a large family, Shastry started begging. He suffered from small pox and witnessed the death of his brothers and sisters, says his biography, published much later. The deadly disease debilitated him and his biography penned by his son says that Shastry by the means of begging reached forested areas near Kolar in Karnataka. It was here that he received the teachings from the ascetic, who also healed him and taught him some secrets of an ancient science, including ancient aeronautics. Later, Shastry, who could not read or write, went to Mumbai several times and finally recounted these verses to Sharma, which became the basis of the manuscript of Vaimanika Shastra.

After these books were published, it caught the interest of modern Indian aviators. With Tatas bringing the first commercial planes to India in the early 1940s, these books have been a point of discussion in the aviation circles even till date. To see whether these aircraft could really fly, Air Vice Marshal (retd), S B Goyal approached IISc. Scientists at the institute, H S Mukunda, S M Deshpande, H R Nagendra, A Prabhu and S P Govindaraju, all from the Department of Aeronautical Engineering and Mechanical Engineering, embarked on the mission. They were asked verify the claims made by the treatise.

These scientists laboured for one year, analysing each and every drawing and verses attached to them on their making and functionality. However, the existing books did not reveal much, rendering the models impractical as they defied the rules of gravity, metallurgy and aeronautics. To see if there was something missing, these scientists traced the family of Shastry. Some of the manuscripts were still with Shastry’s adopted son, Venkataramana. Incidentally, Shastry’s biography written by Sharma and M C Krishnaswamy Iyenger, says that even Shastry himself was not sure about his ideas. The scientists hit a roadblock. In a chapter titled Samarangana Sutradhara in the treatise it was stated that “the detailed description of their construction and other features will not be given lest the same be used for evil purpose by people?” To this the scientists state: “We are tempted to remark that he did not know!”

Further, a linguistic analysis showed that the Sanskrit verses and the metre used in the treatise belong to modern Sanskrit adopted in 19th century, much later than Vedic times. After analysing all the drawings and verses attached to them, the scientists arrived at a conclusion which possibly still holds true: “What we feel unfortunate in history is that some people tend to eulogise and glorify whatever they can find about our past, even without valid evidence. In the absence of any evidence, efforts will be made to produce part of the evidence in favour of antiquity. The above two works are by no means exceptions to this, in particular the recently published book [by Joyser]. In fact, the introduction to reference is least scholarly by any standards.  We feel that the people connected with publication – directly or indirectly – are solely to blame either for distorting or hiding the history of the manuscripts.”