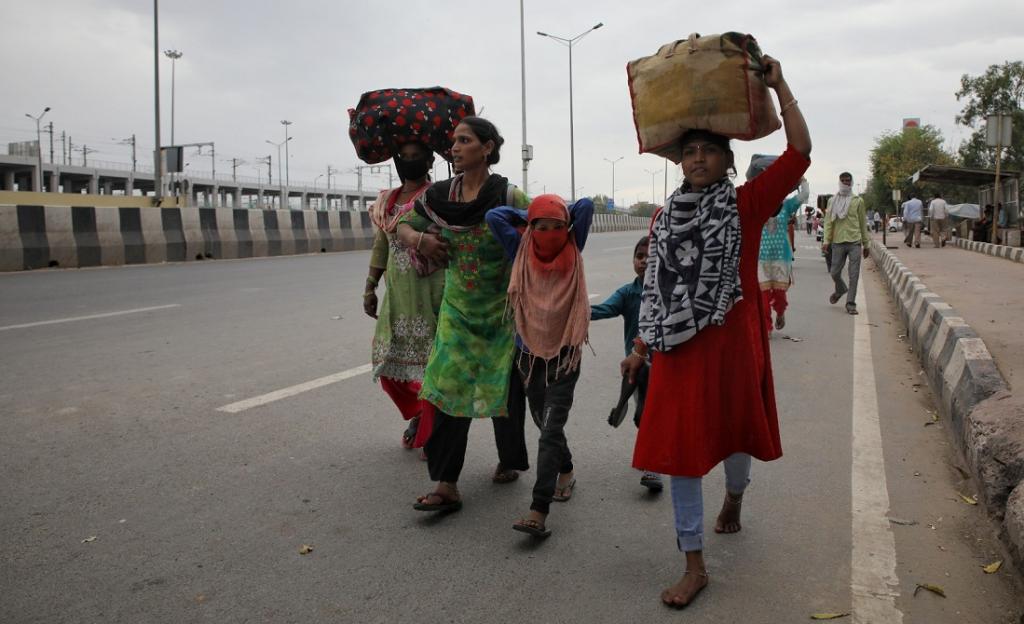 Who can forget the sight of children walking hundreds of kilometres with their daily wage earner parents when the COVID-19 lockdown was declared. Photo: Vikas Choudhary / CSE

The Union Minister of Women and Child Development recently said there were no cases of children forced to leave their homes for illegal child labour, smuggling and forced marriage during the COVID-induced lockdown. She said this in response to a question put to her in the Rajya Sabha during the ongoing monsoon session of Parliament

This statement will raise eyebrows of many who have witnessed the lockdown and have seen children suffering in their own localities.

How can anyone forget the pictures of children walking hundreds of kilometres with their daily wage earner parents, climbing trees and hills for receiving internet signals, being neglected and abused at home and outside during the lockdown?

The first case of COVID-19 in India was identified in Kerala January 30, 2020. The spread began in a surge from March 2020. As a strategy to prevent community transmission of COVID-19, a complete lockdown in the country was enforced March 24, 2020.

Everyone in the country experienced an unprecedented country-wide closure of educational institutions, shutdown of economic activities, hotels, malls, cinemas, transportation, sports centres, places of worship and the like.

The information shared by the minister in Parliament is based on the cases registered with the National Commission for Protection of Child Rights (NCPCR). But NCPCR should not be the only source to access the impact of the lockdown on children.

The NCPCR, meanwhile, has been monitoring and exhibiting great progress in cases of orphan and street children not mentioned in the minister’s response. It is doing this with the guidance of the Supreme Court.

Childline 1098 is a toll-free service to address issues of children in need of care and protection. It functions on 603 different locations and 138 railway stations. A UNICEF report noted that calls to it rose 50 per cent in March-April 2020.

About 20 per cent of the total interventions made were related to child protection issues such as preventing child marriage, child abuse, trafficking, abandonment, neglect and child labor.

A report published in the Times of India June 12, 2020, mentioned that from March to May, the Childline carried out 3,653 interventions of child labour across the country.

Among those 1,264 were begging, 763 were engaged in hazardous work, 513 worked in restaurants, 371 were domestic workers, 286 worked in family units and 156 worked as bonded labourers.

The Annual Report of the Union Ministry of Women and Child Development for 2020-21 itself mentioned that across India, 12,360 police stations had entered information on 410,353 missing children and 315,821 recovered children.

The Accidental Deaths & Suicides in India Report 2020 by the Union Ministry of Home Affairs recorded an unusual increase in the number of suicidal deaths among children.

The government said the lockdown would save people from the grip of COVID-19. But it had a drastically negative impact on the socio-economic and communicative life of people, especially children and adolescents.

The closure of schools, parks, day care and therapy centres, social interaction, increase dependency on the internet pushed them into unsafe zones.

This disruption in the lives of children will have a long-term detrimental impact, much beyond the lockdown period. This needs to be considered and addressed.

The Union and state governments have been taking initiatives to minimise this disruption. Accepting that it happened will pave the way to make such initiatives more effective.