How to resurrect Gandhi

We don’t have leaders who can take his ideas and adapt and rework them for today’s world. 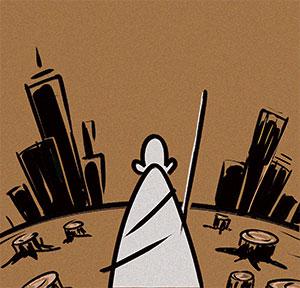 This month would mark the beginning of the year-long celebrations for the 150th birth anniversary of Mahatma Gandhi. It’s a time for reflection and I would like to take you through a Gandhi Test.

The world has surely gone downhill in terms of his most cherished ideal: non-violence. Today, we see aggression in everything; from our words to our social behaviour and our relationship with nature. Our intolerance has hit rock bottom. We score a zero-minus on this.

Then comes the issue of development. Gandhi was not just about throwing out the British. He was about what would come next. He thought about it; wrote about it; built a distinctly different opinion about what needs to be done. His was (is) the alternative ideology to Karl Marx and Adam Smith. Here again, we are at zero, or perhaps a little above.

Gandhi lives on primarily because of the sheer force of his ideas; not because we have put them into practice. It is a fact that Gandhi died because his followers chose to kill him by their deeds. They took to living in ashrams, taking his ideas to closed spaces. They retired from the world and made Gandhism retro. Whereas Gandhi—despite living in an ashram and liking the symbolism of it—engaged with the world. It is we who have made him a narrow metaphysical icon. He lived for the politics of his times. He moved millions without moving himself.

Today, the best we know of Gandhi’s ideas is khadi (handspun cloth)—it’s back in fashion. But what we don’t know, and are not told about, is why Gandhi pushed for khadi. He used it as his instrument of independence; not only from the British but also from industrialisation—which was the order of the day, then and now. For him khadi was about employment, not for the masses, but by the masses. For him, khadi was about a particular seed of the cotton plant, which could be spun by a large number of people. The cotton variety that the British brought to Indian farms would only be spun in the machines of Lancashire. So, it was also about employment generation not by machines but by the masses. It was about localisation and not globalisation.

This cotton variety of Gandhi’s choice was also an indigenous seed. It used less water and had more pest resistance. It would have been appropriate to the environment of the country. Farmers would not have had to commit suicide due to high input costs and high risks of crop failure. But this was possible if we had worked according to this model.

This is why Gandhi is still relevant. Both capitalism and communism have failed us in terms of finding an answer to unemployment and environmental threats. The world of Smith is pushing towards more automation—believing that increased productivity will increase opportunity and skills. The world of Marx is finding it difficult to move beyond the formalised industry and trade unions. They can’t handle the fact that the world of employment is in the hands of individual entrepreneurs of all hues. Their development model is not much different from their hated ideological rivals.

I can say this with absolute certainty when it comes to environment. Both models are and will push the world to a catastrophic disaster of climate change because of their form of development. Gandhi is not outdated; it’s we who don’t know how to practice him. We don’t have leaders who can take his ideas and adapt and rework them for today’s world. The most important “thing” about Gandhi, in my view, was his ability to work with his ideas to meet objectives—but with his absolute and non-negotiable principles of non-violence, justice and equality.

Finally on the Gandhi Test, the only aspect where we can boast of a little higher than a zero mark is democracy. This is not to say that we have taken his idea of the village republic—the deepening of democracy so as to practice it at a doable scale—where it needs to go. We have failed on that. We have instead decided to strengthen representative democracy as against his vision of participatory democracy. But in spite of all threats from old-fashioned but still in vogue dictators to new-fashioned takeover of our privacy; democracy lives, just about.

But it is not enough. With the 150th birth anniversary just a year away, let’s take a moment to think of Gandhi. Of him and like him.