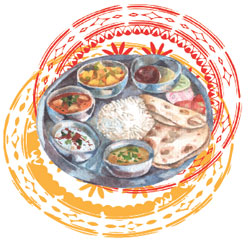 THE MONSOON season has come to an end. But despite deficit rains, India’s tribal and forest dwellers will not stop celebrating the onset of the most awaited season, popularly called the festival season. Till May next year, the cultural calendar is dotted with festivals. And each festival is a celebration of a produce that plays a critical role in the local food economy.

Of late, this season is also being celebrated in small and big towns in numerous food festivals. From Anantnag in Jammu and Kashmir to Paderu in Andhra Pradesh, one gets to see more food festivals now. A quick scrutiny of my email inbox shows that in the last year alone, I got invitations from 65 such food festivals. And most of them celebrated or demonstrated the rich diversity of uncultivated food in local areas. These festivals showcase the greens local people collect and consume. Many revolve around specific uncultivated foods.

Such food festivals have become a new-age obsession for many. These food festivals have several similarities, despite being hosted in different locations and diverse in nature. Most of them are organised by ngos working on food security and biodiversity.

Secondly, most of these festivals are organised with the active participation of tribal or forest communities, and representatives take efforts to disseminate the economic importance of such foods to larger audiences. Those who manage these festivals intentionally talk about modern day ailments and the importance of uncultivated foods in our diet. It is perhaps for these reasons that uncultivated food is also called the green social and cultural economy.

But the first question: why are such food festivals getting popular? It is my inference that non-profits work-ing on local biodiversity and food security have finally understood the crucial connection between ecology and economy. There was never any doubt about the diversity and importance of uncultivated food. But groups either worked on conservation of such biodiversity or articulated the cultural aspects of local communities’ link to ecology. So food security was mostly viewed from the perspective of national food distribution system, under which government gives cheap foodgrains thus ensuring food for all.

What has triggered this change? It is not only a local issue, but also a global trend where policymakers and thought leaders are increasingly focusing on uncultivated foods. There are two reasons for this renewed surge: increasing food prices and issue of food security transforming into availability and access to uncultivated food to ensure proper growth. After the 2008 global food crisis, it has now become clear that there must be a food system that is locally available and is also cheap. The uncultivated food is the best option. It comes free and ensures easy access. For example, forest dwellers in India source up to 50 per cent of their food from uncultivated sources. An average forest dweller has access to over 150 types of uncultivated foods, thus ensuring food security round the year. Despite decades of focused efforts to ensure food security, the debate over food security has progressed to nutrition security now. India’s malnutrition level still remains high even though food availability has gone up. This problem can be solved only by restoring people’s traditional food basket. That is the reason why these food festivals intentionally talk about nutrition security and their economic importance.

Whether these food festivals have already made an impact is debatable. But the fact remains that they bring out our food diversity at a time when the average Indian is consuming just four to five types of grains and vegetables.