The sector is not adopting cutting-edge technologies, switching fuels, or even working on energy efficiency and demand reduction

Emissions from manufacturing industries and construction accounted for nearly 19 per cent of global carbon dioxide (CO2) emissions from fuel combustion in 2016. When emissions from power and heat are allocated to end-use sectors, its share rises to over 36 per cent, making it the largest such sectoral emitter.

Of all greenhouse gas (GHG) emissions as a whole (excluding land use change and forestry), industrial processes and onsite energy emissions from industry accounted for over 20 per cent in 2014; a share which has worryingly increased from 16 per cent in 2000.

Even the United States (US) reduced industrial GHG emissions by 12 per cent between 1990 and 2017 though, at over 7 per cent it still accounted for a share higher than its share of global population.

But the reduction in emissions has been largely due to the so-called deindustrialisation and shift from manufacturing to services experienced by many rich economies in the past few decades, rather than sustained progress towards decarbonisation of processes. Moreover, as consumption has continued to sky rocket, emissions have merely been outsourced to exporting countries.

Thus, rich country consumption accounts for a significant share of industrial emissions in countries such as China, which accounted for nearly half (46 per cent) of global energy related industrial CO2 emissions (see graph below). Industry’s share in China’s total emissions was over 60 per cent, compared to 45 per cent in India, 17 per cent in the US and 25 per cent in the European Union (EU). 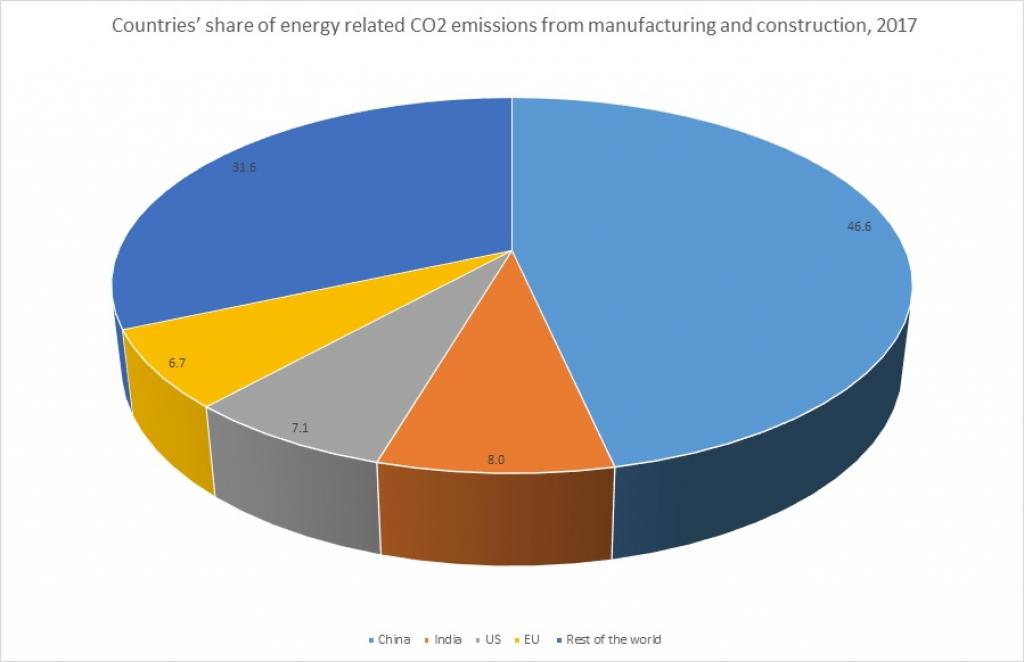 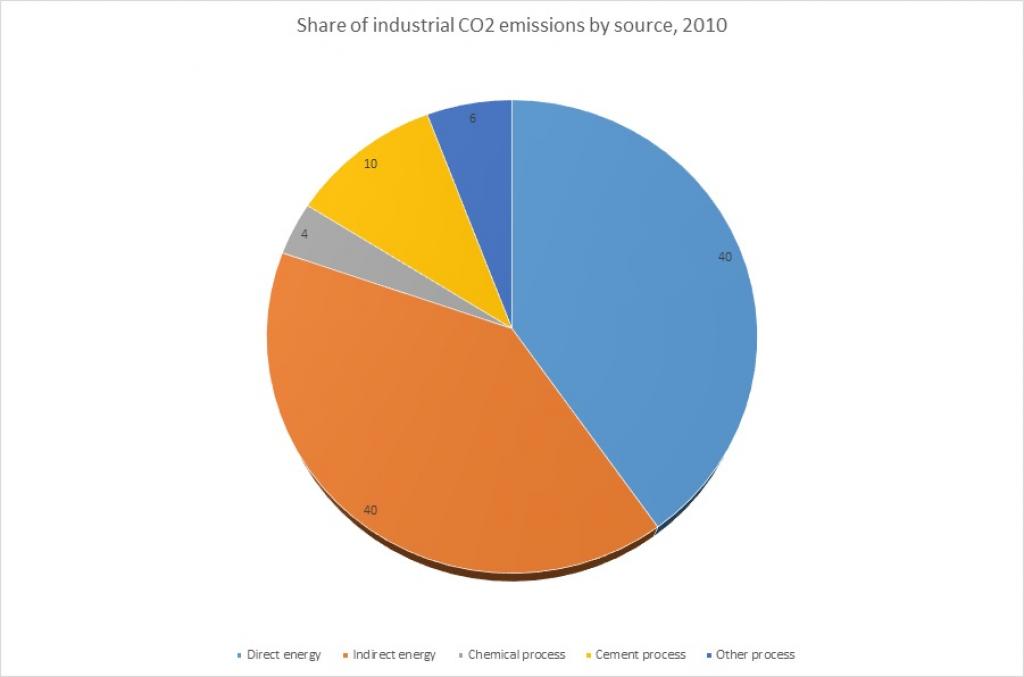 In terms of manufacturing sub-sectors, steel and cement accounted for a quarter each of global direct industrial CO2 emissions in 2017 (see graph below). 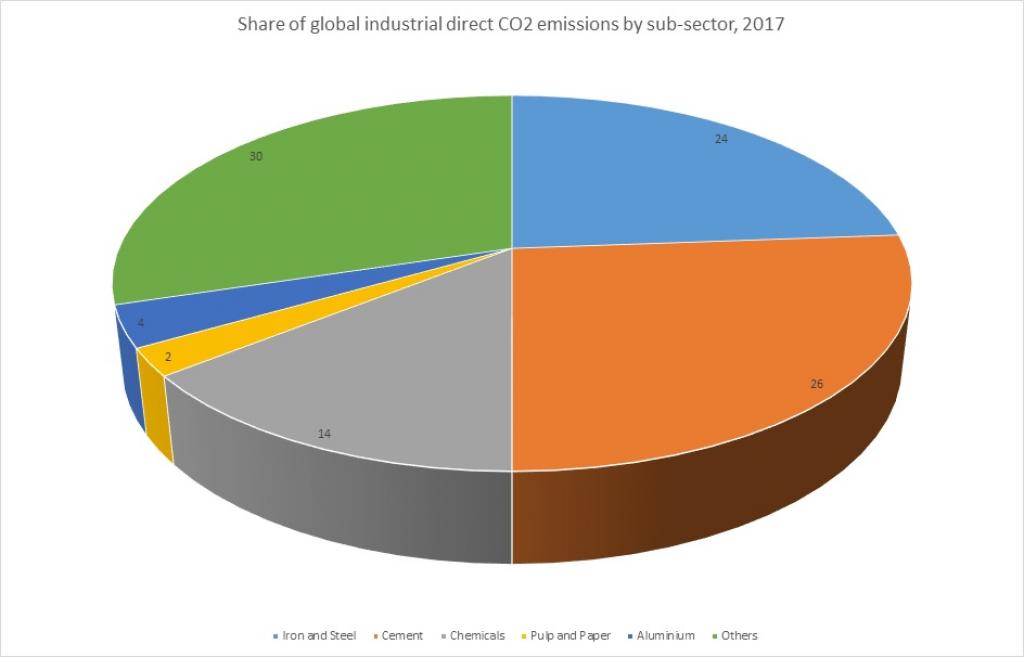 In last year’s special report on limiting warming to 1.5 degrees by the end of the century, the Intergovernmental Panel for Climate Change (IPCC) estimated that industrial CO2 emissions need to decrease by 50 per cent and 80 per cent respectively over 2010 levels in 2050 to be consistent with its two degrees and 1.5 degree overshoot pathways, compared to a projected baseline of a 30 per cent increase in emissions.

Industry is a particularly hard sector to decarbonise as the high temperature and other process requirements make the switch to renewables hard; moreover a fifth of the sector’s CO2 emissions are from processes rather than from energy use and progress towards alternative processes is slow.

It notes that the IEA estimates that under its Beyond 2 degree scenario (B2DS), 42 per cent of the emission reduction in 2050 can come from energy efficiency, 13 per cent from low carbon fuels, 37 per cent from innovative technologies including CCS and 8 per cent from material efficiency.

It is on energy efficiency that the most significant progress has been made over the decades as the cost savings of increased energy efficiency have been long recognised. Yet, industrial productivity growth between 2010 and 2017, at 1.9 per cent fell short of the 2.3 per cent required till 2030 to be consistent with the IEA’s Sustainable Development Scenario pathway (which itself falls substantially short of the 1.5 degree target).

Like in the transport sector, the climate benefits of electrification in industry rely on a rapidly decarbonising grid and the IPCC’s special report projects near-zero carbon emissions from about 2050 onwards under two degree and 1.5 degree overshoot pathways.

On renewables as a whole, renewable heat consumption in industry increased at an annual rate of under two per cent between 2010-18, compared to the three per cent required till 2030 under the IEA’s Sustainable Development Scenario.

The IPCC has been warmer towards CCS in its special report on 1.5 degree compared to its Fifth Assessment Report (2014), noting that 1.5 degree consistent pathways will be difficult to realise unless carbon dioxide recovery (CDR) becomes feasible at scale and projecting significant mitigation through the technology by 2050.

The special report, however, continues to highlight uncertainties around the technology including the currently limited pace of development; noting that while technological maturity had improved, costs were yet to reduce. It emphasises the greater importance of CCS to the industry than to the power sector; not only because the former have fewer options to reduce emissions from key processes (like cement) but because also retrofitting industrial plants with is sometimes easier than doing the same for power plants.

Nevertheless, CCS (in industry or otherwise) has yet to display significant potential, though some scattered experiments are taking place, particularly in the cement industry. Concerns continue to be raised not just about the economic, social and pollution costs of CCS but even about its limited ability to mitigate emissions.

Thus overall, industry is not on track to shoulder its share of the global mitigation burden. This is due to the sector falling short on all fronts, including not just cutting edge technologies such as CCS or technically challenging actions such as switching fuels, but also low hanging fruit such as demand reduction and energy efficiency.