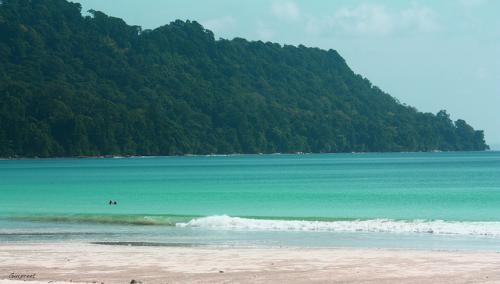 The Andaman & Nicobar Islands is one of the union territories of India, situated in the Bay of Bengal. It consists of 348 islands. Of these, only 27 are inhabited by humans.

The indigenous population of these islands is ethnically and culturally diverse. Some of the islands’ original settlers include Onges, Jarawas, Sentinalese, Nicobarese, Andwanese, Shompens, and others. However, during the British occupation, people from mainland arrived in North Andaman in 1789.

Andaman & Nicobar Islands are famous for pristine beaches, rich biodiversity and culturally diverse human populations. At least 10 major forest types can be recognised starting from giant evergreen forests to littoral and mangroves. Of the fauna, molluscs dominate with 786 species, followed by 720 species of fish. Around 242 species of birds and 68 species of mammals have been recorded in the islands.

What is most alarming, however, is the sharp decline of local inhabitants after arrival of people from India’s mainland. Population of Onges, who largely remain hunter-gatherers, has come down to less than 100 in year 1985 from the count of 700 in 1859. Anthropologists estimate that tribal population in Andaman & Nicobar Islands came down from 10,000 in 1779 to less than 450 by 1985, which is less than 5 per cent of the original.

Now, India’s Ministry of Tourism, has reportedly formed a panel to probe into the possibilities of opening up uninhabited Islands to high value tourism. The move has allegedly been initiated by prime minister’s office. The government panel has been asked to “redefine existing coastal zone regulation to allow construction of the edge of the sea area” (PA Update, October 2016). Plans to construct world class resorts and hotels with private investment in the region are afloat. The Panel is expected to submit its report within a month.

One can recall that Coastal Regulation Zone (CRZ) Notification 1991 which was amended 20 times before a new one was issued in 2011. Most of the states and union territories, including Andaman & Nicobar islands, are yet to prepare an Integrated Coastal Zone Management Plan (ICZMP).

The question of importance here is: will it be a right to relax CRZ and make the islands more vulnerable when climate change is becoming a harsh reality. One should not forget the tragic impacts Andaman & Nicobar Islands faced after the 2004 tsunami!