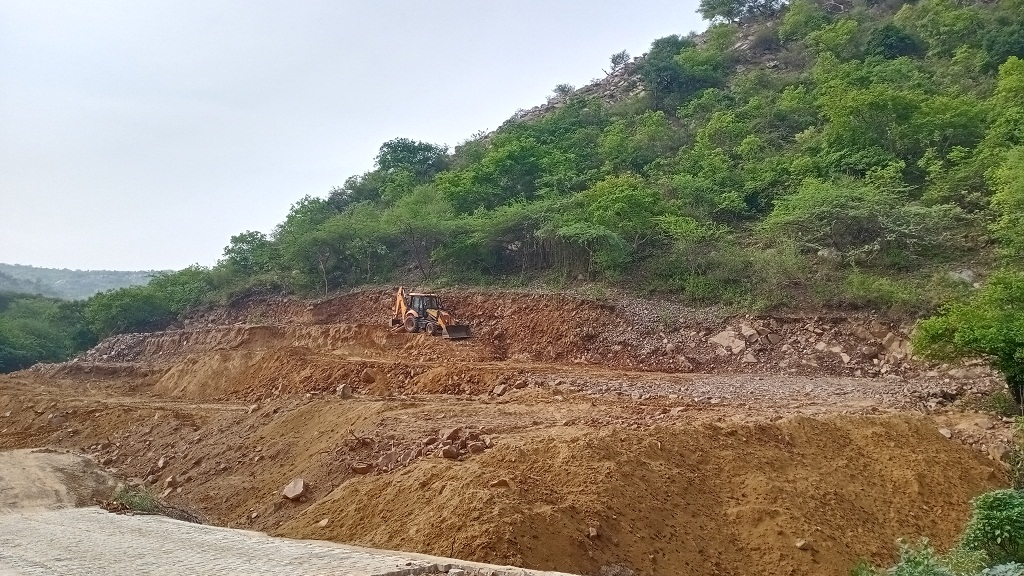 A Haryana police officer posted in Tauru (Mewat) was allegedly run over by a stone-laden truck July 19, 2022.

Deputy Superintendent of Police (DSP) Surender Singh had gone with a police team to investigate illegal stone mining in Nuh tehsil's Panchgaon village. The mining mafia allegedly murdered the policeman at the site.

However, a section of the local community has continued to benefit for over two decades, working at the behest of the mining and land mafia. Several political parties have also contributed to maintaining the status quo.

The ruling party had promoted the amendment to the Punjab Land Preservation Act, 1900, before the 2019 Lok Sabha and Assembly elections. The changes were shown as an attempt to legalise mining and real estate in the Aravallis.

The Mewat incident results from the careless attitude of political parties and administrative officials toward the law and court orders.

Illegal mining is flourishing in Mewat, Rewari and Mahendragarh districts, taking advantage of this attitude.

No action by authorities

Gurugram and Faridabad are urban affected areas, so illegal mining is being carried out in the garb of real estate. The stones taken out of the ground while levelling encroached Aravalli land are often more valuable than the plot.

Several projects proposed by the government, like roads and other construction work in the Aravallis, are only for the benefit of the mining and real estate lobby.

The lobby reaches from the topmost rungs of power to the very bottom and influences others to try their hand too in the area.

Most complaints against illegal mining and encroachment are turned away by concerned departments by intimidation in the name of cross-complaints. If a complaint is filed under pressure, the main accused are protected during the action taken by the departments.

This system is only disrupted for short durations when an officer of a different ideology gets transferred to the affected areas.

The recent case of Singh losing his life has been in the limelight as a DSP-rank officer was targeted. Otherwise, deadly attacks by the mining mafia on police officers and forest, mining and transport department officials in the Aravallis are not new.

A gang of 60 people was busted in Faridabad just a while ago. The action came on the complaint of a transport department officer, who was constantly being followed from his home to his workplace by the gang members.

During the investigation, the Crime Branch also brought up the possibility of the involvement of several officers posted as police station in-charge and outpost in-charge.

There are many cases of security guards, forest rangers and even policemen being thrashed, in which almost no action is taken against the criminals.

The reckless attitude of the local administration puts environmental activists and journalists working in these areas at risk.

When they go into these areas unprepared, they are often beaten up by land and mining mafia goons and their cameras or phones are smashed. I have faced such a situation many times in my decade-long work in environmental protection.

In 2016, I worked on wildlife conservation in the Aravallis with a team from the Wildlife Institute of India — an internationally acclaimed institution. We were ambushed by members of a mining gang who had planned to pelt stones at us in Ghata Shamshabad village in ​​Mewat.

We were lucky enough to be forewarned by a village elder who stopped us a few metres away.

During the same survey, mining goons did not let us advance in ​​Mahendergarh’s Nangal Mala. The forest guard accompanying us was also helpless.

I was part of a team documenting for the People’s Biodiversity Register of Faridabad last year when mining goons again stopped us. We were going towards Bharadwaj lake in ​​Anangpur. There was no action by the police despite filing a complaint.

However, when there is action, the mining and land mafia get an advantage during the trials that the area is disputed.

The non-definition of the Aravalli area as forest land and the controversial privatisation of shamlat lands help the goons go scot-free.

Thanks to the Supreme Court order regarding prevention of mining, Section 188 of the Indian Penal Code (IPC) can send an offender to jail for a day or two.

But after they get bail, it becomes challenging to prove violations of the Forest Conservation Act in court. The criminals are let off after a fine of a few thousand rupees as the area’s status is also unclear.

As a result, mining and land mafia gangs live freely, thanks to political protection. At the same time, law and order and officials like DSP Singh are under threat despite court and NGT orders for the conservation of the Aravallis.

Sunil Harsana is an independent forest and wildlife conservationist