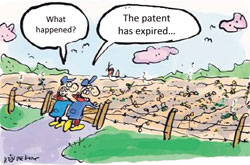 The World Intellectual Property Organization has announced clearly that it intends to play a role—and considering the clout WIPO enjoys it implies a significant part—in promoting intellectual property (IP) in agriculture to enhance productivity. The UN body stepped into this touchy arena with a seminar at its Geneva headquarters that has gone almost unnoticed. The June 14 seminar had just a handful of participants—India was one of them—for the day-long deliberations on ‘How the Private and the Public Sectors Use IP to Enhance Agricultural Productivity’ but its rationale for pushing IP is fraught with problems.

It believes that one of the reasons for hunger and malnutrition in many developing countries is “insufficient agricultural productivity which does not keep pace with increasing demand for food due, essentially, to population growth”. This in itself is bound to deepen the deep divisions in the food security debate. Take just the example of India. Despite its overflowing granaries from increasingly good yields of cereals, India remains one of the hungriest nations in the world. It is ranked 67th out of the 84 countries listed on the Global Hunger Index report, 2010. Malnutrition is persistent with the country accounting for 42 per cent of the world’s underweight children. As the food lobby has pointed out, this is hardly a problem of supply. Even globally, the problem would appear to lie elsewhere.

According to an FAO-commissioned study released in May this year, roughly one-third of the food produced in the world for human consumption every year, that is, approximately 1.3 billion tonnes gets lost or is wasted. WIPO, however, has taken the position that the issue is primarily “lack of incentives to develop or to introduce appropriate agricultural technology, including better adapted varieties of plants”. Its note on the productivity-IP link states that “there is ample evidence that a suitable legal and administrative framework of IP protection may provide a key incentive for creativity, investment and knowledge transfer in many different circumstances and in agriculture in particular, for both the public and the private sectors”.

WIPO kicked off its debut seminar on agricultural IP issues with a clever mixture of participants. There was the International Treaty on Plant Genetic Resources for Food and Agriculture, the International Centre for Trade and Sustainable Development, Cereal Growers’ Association from Nairobi, Indian Council of Agricultural Research’s National Agricultural Innovation Project along with Syngenta International AG, the Basel-based biotech giant, and the International Seed Federation. The latter two, predictably, called for an IP regime that would include both plant variety protection and patents on seeds and traits.

Michael Andreas Kock, head, intellectual property with Syngenta International, did offer a compromise. Conceding that society was deeply distrustful of the patent regime and tended to view IP as a threat to human needs (food, health and knowledge), he suggested open source as an alternative system for knowledge sharing to drive faster solutions.

Essentially though the entry point for the private sector will be the UPOV (International Union for the Protection of New Varieties of Plants) convention that protects plant breeder’ rights. Neither UPOV nor the regular patent protection really has any relevance for agriculture in developing countries because the convention, although amended several times, still does not offer the flexibilities allowed to farmers under the World Trade Organization’s agreement on Trade Related aspects of IP rights or TRIPs. The latest convention, UPOV 91, allows seed saving but not seed exchange although this would be consistent with TRIPs.

India is among the handful of countries to have put together a sui generis system that affords farmers a double protection, the right to save and exchange seed unless it is branded. The country is, therefore, viewed as a dissenter— or has been till recently—because such exceptions, according to the developed, impede the plant breeder’s ability to develop locally adapted varieties.

WIPO’s efforts would obviously be focused on resolving this thorny issue which has eluded a solution at WTO. Why has this shift occurred? Critics call this forum shopping: if progress is slow in one agency, those seeking urgent solutions will naturally shift their efforts to another. It was only a matter of time before IPR issues related to food security which had stalled in WTO moved to an alternative venue. WIPO offers an ideal forum since discussions here have centred on its Development Agenda.

Among the several clusters in this schema is Cluster B which says WIPO will seek to promote “pro-competitive IP licensing practices, particularly with a view to fostering creativity, innovation and the transfer and dissemination of technology”. Clearly, this could include the licensing of agricultural biotechnology. Had the developing countries, chief among them India, which fought so hard to push the development Agenda, envisaged this eventuality?