Relish yaipan, a wild flower from The Himalayas, as food or as drug 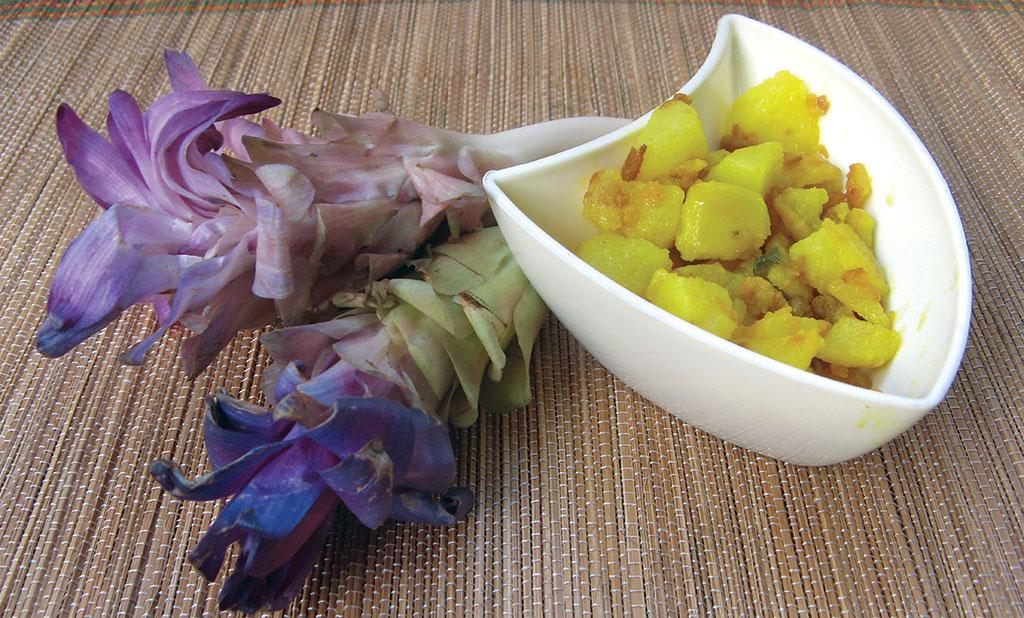 Flowers invariably evoke an immediate sense of happiness, more so if they are rare. At a recent market in New Delhi for northeastern products, funnel-shaped flowers with shades of deep purple, blue, pink and white, were being sold as a food ingredient.

The seller plucks a petal from the many layers stacked one below the other on a cob, and rubs it gently against the skin. It has the fragrance of turmeric. “These are flowers of wild turmeric,” he says. “Cut them lengthwise into thin strips, chop into small bits and then use as a flavouring ingredient to make delectable curries and soups,” he says explaining its use. The seller, like all the others managing the stalls, belongs to the Thangkul Naga tribe. They call it koktuiwon.

It’s a task to gather information on the day’s acquisition. Koktuiwon is an aromatic root, reveals online search. Its flower, however, does not find mention anywhere. This is when the messaging platform WhatsApp comes in handy. Sharing pictures of the flower elicits response from Diana Chingakham, founder-editor of happytipsy.com, an online media for the food and beverage industry. The flowers are called yaipan in Manipuri language. Online search on yaipan generates a wealth of information, and soon understanding it becomes easy.

Called East Indian Arrowroot, the scientific name of yaipan is Curcuma agustofolia and belongs to the ginger family. It smells of turmeric when eaten raw. Tikhur in Hindi, keturi halodhi in Bengali and tavakeera in Marathi, it must not be confused with the West Indian Arrowroot (Maranta arundinacea), which has high starch content and is used as a thickening agent while cooking.

The plants are found at an altitude of 900-1,200 metres on the Himalayas and grow up to 90-180 centimetre in height. They flourish in the wild areas of northeastern India, but can also be found in Kerala, Tamil Nadu and Maharashtra. The flowers usually bloom in the beginning of the rainy season — from July to August — before the leaves have fully developed, and continue to bloom even after this.

Compared to the plant, less research has been done on the flower and its uses, but a paper published in the Journal of Food Science and Engineering in January 2017 throws fascinating insights into the benefits of its consumption. According to the paper, consumption of yaipan is common in the North East and has antioxidant properties which strengthens the beliefs of indigenous people who include it in their diet and also use it as a herbal drug. The study was done to “validate the traditional claims of medicinal properties in consuming curcuma flowers to make the person less susceptible to diseases.”

Researchers have also found that the flower can treat gastrointestinal disorders and stomach ailments. It is high in chemical constituents like alkaloids, tannins, steroids and saponins. Experiments confirm its anti-cancerous properties and the ability to prevent damage to the liver. Yaipan is used in ayurveda for its healing properties and is believed to cure tuberculosis, asthma, cough and burning sensation in the body, says a 2015 paper published in Journal of Pharmacognosy and Phytochemistry.

Scientific explanation apart, the flower tastes pleasant. Whole flowers are dipped in seasoned flour batter and dropped in hot oil to make thick and fleshy fritters. Yaipan is also used to make eromba (a Manipuri chutney) and potato curries (see recipe). One can safely play with the ingredient adding it as a condiment to any daal or vegetable to get that unique flavour.