The ever-expanding population requires an enormous amount of wood, which in turn, puts intense pressure on the existing forest wealth of India 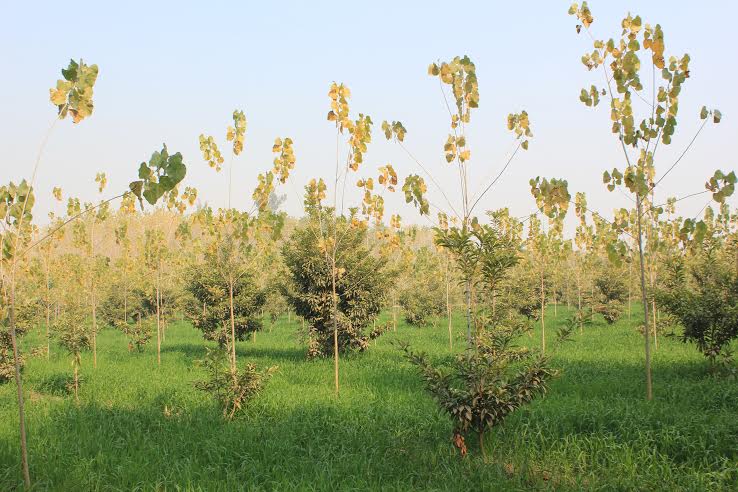 Last month, on the occasion of the 10th Sustainability Summit organised by the Confederation of Indian Industry (CII), Union Environment Minister Prakash Javadekar talked about the Centre’s decision to convert degraded forests into forested ones through public-private partnership (PPP) mode.

A similar announcement was made last year during the declaration of the National Agroforestry policy 2014, with special emphasis on the promotion of farm forestry and agroforestry. But even after a year, there is no visible action on ground.

In the present context, there is a need to scale-up already-developed agroforestry models using indigenous species for ecological sustainability and economic expansion.

It is a fact that the ever-expanding human population requires an enormous amount of wood, which in turn, puts intense pressure on the existing forest wealth of India.

Moreover, in the past 10 years, the money spent on import of wood has jumped from US $1 billion in 2001 to more than US $ 5 billion in 2011. Owing to the scarcity of domestic timber resources and a burgeoning demand, wood imports in the country have doubled since 2006 (See RISI 2013 http://www.risiinfo.com/risi-store/do/product/detail/2013indias-forest-products-industry.html?source=EM1 304ST).

As land is a limited resource, expansion of farm areas is not possible. However, enhancing the efficiency of farms by planting and integrating fast-growing trees under farm forestry and agroforestry is a reasonable and realistic alternative to meet the ever-increasing demand for wood.

Planting fast-growing trees outside the forest in the form of farm-forestry or agroforestry is the only way to meet the goal as required by the National Forest Policy, 1988 to increase forest tree cover to 33 per cent from the present 24.01 per cent.

Is introducing exotic species the solution?

Foresters are often targeted for introducing and promoting exotic trees either in plantations or forest areas for increasing forest cover. In the past two decades, wood-based industries and plantation companies have emphasised on introducing exotics trees like Eucalyptus, Casuarina, Poplar and Subabul to fulfill the requirement of raw wood.

Some species such as Populus deltoides (Poplar) and Casuarina equisetifolia (Casuarina) are confined to a particular geographical location.

Introduction of exotic species is not a permanent solution as they thrive over indigenous ones. Besides, exotic tree species have certain limitations either in terms of site specificity or their effect on the existing vegetation and crops.

Controversies surrounding the monoculture of exotic trees for testing soil health, water retention capacity and ecological threats to indigenous vegetation are known to everyone. Indigenous species like Neem, Melia, Kadam, Ailanthus and Hollong were tried as substitutes for exotic species. Melia dubia (in Tamil known as Malai Vembu) was found to be one such indigenous tree species which is fast growing and also adapts widely.

Melia dubia, a large, fast-growing deciduous tree of the Meliaceae family, attains a height of 20-25 metres. It has a spreading crown and straight cylindrical bole (trunk) of around nine metres.

It is an indigenous species of south-east Asia and Australia. In India, it is naturally found at an altitude of 600-1,800 metres, especially in the Sikkim Himalayas, northern Bengal, Assam, Khasi hills, hilly regions of Odisha, Deccan Plateau and the Western Ghats.

As far as productivity of Melia dubia is concerned, the species grows at the rate of 41.54 cubic metre/ha/yr (Saravanan et al., 2013), which is higher than Eucalyptus and Poplar.

The wood quality of Melia dubia makes it a perfect raw material for manufacturing plywood, match sticks and for use in the paper industry. Wood from this tree can also be used for making furniture, musical instruments, packing cases and agricultural implements as it is termite resistant. Wood from this tree fetches a good market price ranging from Rs 450 to Rs 600 per cubic feet of wood.

Under the present farming system, crop cultivation is considered productive if a farmer is able to acquire a minimum profit of Rs 1,00,000 to 1,20,000 per hectare annually to sustain an average family.

But in the past few years, natural calamities and volatility of market have forced small and marginal farmers to abandon conventional and risky agricultural farming.

The many uses of this tree gives the option to policy framers to go for high-density plantations 2,500-3,000 trees/hectare) for paper and pulp wood on a two-to-three year rotation basis, yielding approximately 100 to 125 tonnes of pulpwood at a market rate of Rs 3,500-4,000 per tonne.

There is always a comparison between exotic and indigenous tree species in terms of productivity, but if we compare the yield and monetary returns of Melia dubia, it is far better than that of Eucalyptus and Polplar. At present when more focus is laid on conservation of natural forests, fast-growing indigenous species can play a significant role to meet various requirements.

Manmohan J R Dobriyal, the co-author, is from the Department of Silviculture and Agroforestry, ASPEE College of Horticulture and Forestry, Navsari Agricultural University, Gujarat