Good, but not enough 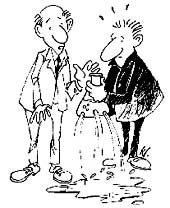 the South Asian Association for Regional Cooperation's (saarc) Integrated Programme of Action identifies 12 areas in which the member countries could cooperate. Science and technology (s&t) is one of them. A technical committee -- representing all member countries -- was set up in 1982 and has since been responsible for the implementation, coordination and monitoring of programmes in the field. Its primary aim has been to help member states build or reinforce their national s&t capabilities and undertake coordinated programmes and activities at both national and regional levels. The committee also examines broad relationships at the policy level between s&t and socio-economic development so as to incorporate the former into the latter.

Fourteen possible areas of cooperation in the field of s&t have been identified. These include, among others, the transfer and adoption of appropriate technology; survey of natural resources and remote sensing; marine sciences and genetic engineering.

Several workshops and seminars have been organised on themes like biomass production, renewable energy sources, women in the development of s&t, medicinal and aromatic plants, low-cost housing and biofertilisers. The saarc countries have identified areas for conducting regional training programmes. At the same time, they have offered to train personnel in different fields. For instance, Bangladesh has sought training programmes on low-cost building techniques and has offered to instruct professionals from other member countries on the techniques of conducting health, population and agriculture surveys.

Over the years, many proposals for joint research and development (r&d) projects have been submitted. However, only two such projects have so far been implemented. These were on the design and manufacture of food processing equipment by India and appropriate post-harvest food technology for perishable items such as fish, fruits and vegetables, coordinated by Bangladesh.

State-of-the-art reports like the ones on biogas technology and mineral resource exploration drawn up under the supervision of India, have been prepared. The reports also provide a list of organisations involved in r&d in the subject concerned in the region so as to brief scientists on the activities being carried out and encourage collaborative projects.
Despite all countries having actively participated in these meetings and in the implementation of saarc's s&t agenda, cooperation in some core sectors like micro-electronics has not effectively taken place.

The region's nations are represented in the committee mostly by junior bureaucrats who generally lack a grasp of technical issues. And, by the very nature of their appointments, the continuity of representation becomes a casualty. The absence of experts from private institutions who have been actively involved in the promotion of s&t in the region is glaring. As the committee is the most fundamental forum for s&t policy initiation and implementation, South Asian nations should be represented at the meetings by high-level professionals.

An equally distressing aspect has been the postponement and derailment of scheduled programmes on the grounds of poor communications, procedural delays and financial constraints. For instance, many of the state-of-the art reports initiated in 1985 did not see the light of day till as late as 1992.

Though the list of training areas and schedules sought and offered by member countries is quite long, the number of training programmes actually conducted has been abysmally low. The training programmes form the rallying point of s&t cooperation and their casual implementation only reflects the ritualistic manner in which the committee meets every year.

As most of the state-of-the-art reports are first-time studies, some of them are very general in nature. Therefore, at least a few of these would have to be followed up with more integrated and detailed reports for the identification of cooperative ventures.

The area of appropriate technology has not really been explored though these techniques are cost-effective, easier to transfer and implement, more labour-intensive, and suitable for tapping indigenous skills and raw materials.

An examination of the socio-economic status of the member countries clearly reveals that if development needs have to be met rapidly, carefully formulated technology missions have to be undertaken by saarc countries in a collaborative manner. The strengthening of the region's s&t capabilities is also important to overcome the deep-rooted belief that it is only the developed nations of the world that can offer assistance in the field.