Like last 15 years, budgetary allocation for children remained stagnant in Union Budget 2017-18 with government allocating just 3.32 per cent to children. While the need is for exponential increase, allocation has seen only an incremental increase to Rs 71,305.35 crore for children from Rs 65,758.45 crore in Budget 2016-17.

The recently released National Plan of Action for Children (NPAC) chalks out targets for children for next five years and states, “It is recommended that at least five per cent of the Union Budget must be spent on schemes and programmes directly related to children”. This budget does not even meet the conservative recommendation stated in the NPAC.

The increase of Rs 1,245 crore under the ICDS catering to care, nutrition and education of 13.9 crore children under the age of 6, is not as significant as it seems. This year, when the NPAC visions change for children for the next five years, our investment in foundational years of childhood remains the same as it was in 2012-13. In absolute terms, the allocation was Rs 15,765 crore (2012-13) as against Rs 15,245 crore this year. Within this corpus, Rs 500 crore is allocated for Mahila Shakti Centres. At present, the ICDS reaches only to 50 per cent of these children under age of six and in no way this increase is enough to ensure universal coverage, let alone the vision of anganwadi-cum-creches becoming a reality.

Incentives for girls’ education, which saw a decrease in recent years, have seen some improvement with an increase of Rs 275 crore in incentive for secondary education.

While the government, in this budget, has clearly demonstrated focus on development of marginalised communities by increasing the allocation by 35 per cent, it is disheartening to see a decrease in budget by 35 per cent for measures which ensure equity and inclusion of SC/OBC children by the Ministry of Social Justice and Empowerment. The budget allocated towards pre- and post-matric fellowships and hostels decreased from Rs 985.5 crore to Rs 638.93 crore. The pre-matric scholarship for SCs, for instance, has been reduced drastically from Rs 459 crore to Rs 45 crore. Also, the allocation by Ministry of Tribal Affairs on umbrella scheme for education of ST children has marginally decreased. 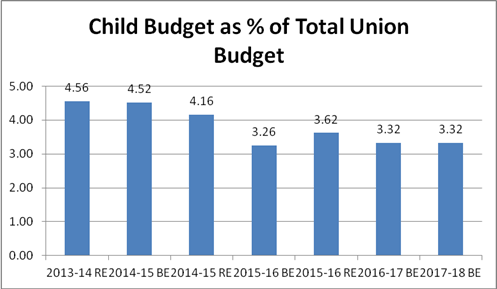 We are still struggling to meet the RTE targets and fulfil huge gaps in areas like teacher vacancy, infrastructure and quality learning. The mere increase in the allocation of budget in SSA (Sarva Shiksha Abhiyan) by Rs 1305 crore will be distributed among 1,080,757 elementary schools in India.

The scheme for Child Protection saw a revival in the revised estimate stage last year (from Rs 397 to Rs 597 crore) and has seen further increase of about Rs 50 crore in the 2017-18 budget to Rs 648 crore.

Hopes for an early revival of the National Nutrition Mission, which has been in the pipeline for over two years, have also resurfaced with an allocation of Rs 1,100 crore as against Rs 360 crore which was largely unutilised in 2015-16.