As false claims under the Forest Rights Act raise alarms, villages in Gujarat show how communities can use technology to address them

A combination of technology and community-owned processes can be effective in dealing with false claims. Credit: Shruti Agarwal

A recent media report highlighted that a large number of claims, close to 280,000, made under the Scheduled Tribes and Other Traditional Forest Dwellers (Recognition of Forest Rights) Act or FRA, 2006 for individual occupation and cultivation had been rejected in Maharashtra. The report also quotes a noted environmental activist stating that the ‘simple’ logic behind the rejection was that forest lands in possession of those claimants are encroachments.

Section 3(1)(a) FRA recognises the “right to hold and live in the forest land under the individual or common occupation for habitation or for self-cultivation for livelihood” provided the claimant had been in occupation of such forest land before December 13, 2005. FRA rules detail a three-tier process at the village, sub-divisional and district level for claiming, processing and formally recognising the aforesaid right—the issuance of title deed. Claims made on forest lands that have been occupied or brought under cultivation on any day post December 13, 2005 are considered false and termed encroachments. Such claims are not eligible for recognition under the Act. 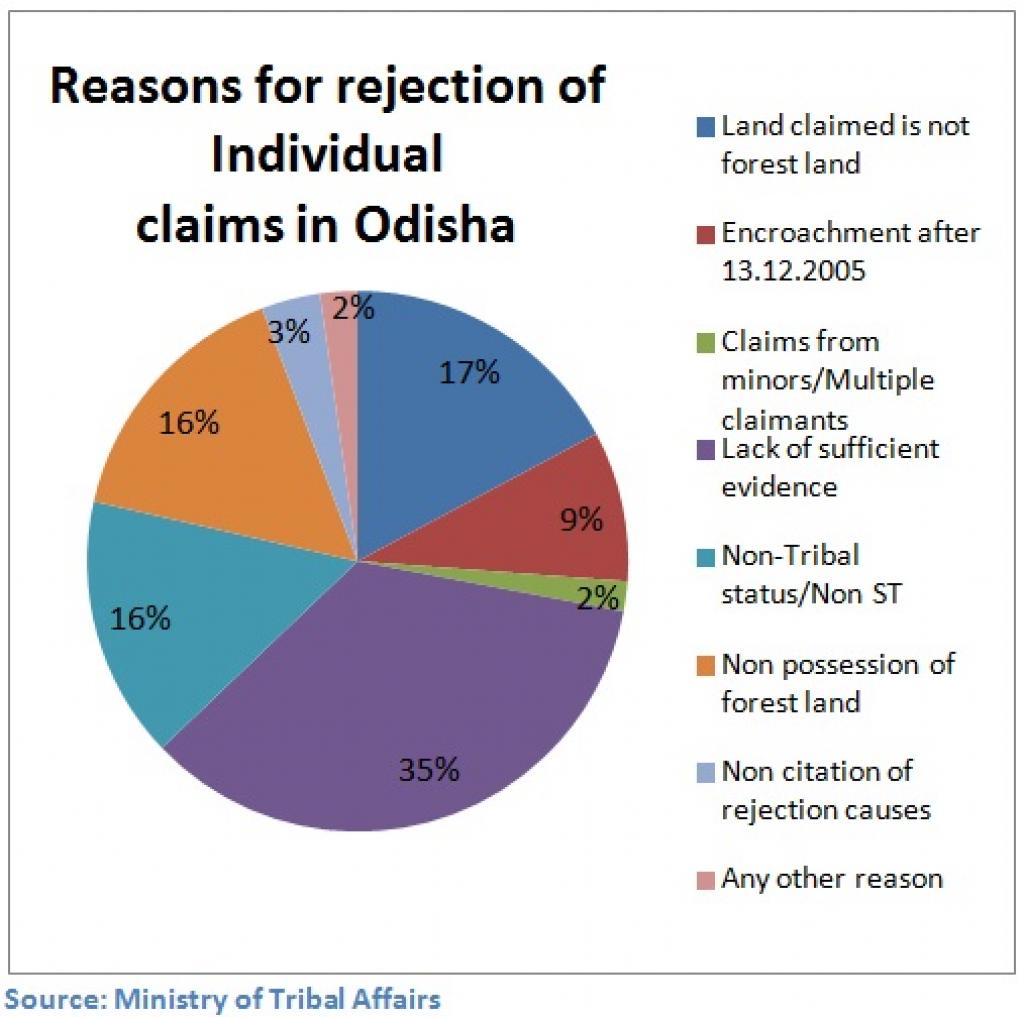 The Ministry of Tribal Affairs (MoTA), the nodal agency for FRA implementation, has often cited the lack of sufficient evidence as the primary reason for the rejection of claims, and asked state governments to revisit such claims. State governments have also been asked to furnish quarterly reports on the status of claims which should provide, among other details, reasons for rejection as well. Odisha has, till date, been the only state to provide such information and the reasons it lists contradict the ‘simple logic’ of the environmental activists.

As of April 2017, Odisha rejected 149,150 individual claims. Of these, the predominant reason for rejection of close to 35 per cent claims was lack of sufficient evidence. Encroachments on forest land after December 13, 2005, on the other hand, constituted only 9 per cent of such claims.

Nonetheless, occupation of forest land post enactment of FRA, and making claims on them under the Act are known to happen, and remain an unresolved concern to some extent. Forest officials have, on number of occasions, complained about political pressure in favour of approving the false claims. Time and again, satellite imagery for verification of claims has been touted by a group of conservationists as the panacea for identifying and dealing with such claims. A writ petition, currently being heard in the Supreme Court, has also placed this demand to address the ‘misuse’ of FRA, among other curbs sought on the Act.

The debate over satellite imagery

“The accuracy of the high resolution time series imagery is very high. Several official reports, including the Saxena Committee, based on satellite imagery, have found that intact forest lands as on the cut-off date of 13.12.2005 have been subsequently opened up and claimed under the FRA. The CAG report No. 6 of 2017 has used satellite images and concluded that satellite-based images indicated a very high degree of encroachments (six times) as compared to that recorded by the Karnataka government. This analysis needs to be applied at ground level to assess the exact area under encroachment for taking necessary actions. Since FRA only allowed recognition of those in occupation of forest land as on December 13, 2005, the first step should have been to use satellite imageries to accurately establish such opened up forest areas to weed out bogus claims,” says Praveen Bhargav from Wildlife First, one of the petitioners in the Supreme Court case against FRA.

In Gujarat, the state government declared in 2010 that it would use satellite imageries to determine the legitimacy of individual claims for which documentary evidence in forest department’s records was not available. Bhaskar Acharya Institute of Space Applications and Geoinformatics (BISAG), a state-owned facility, was assigned the task. Of 182,000 individual claims that had been filed, nearly 70 per cent (128,000) were not supported by BISAG maps and rejected, without consideration for any other evidence submitted by the claimants.

In 2014, a study by The Energy and Resources Institute (TERI) used satellite imageries to establish that less than 5 per cent of the forest lands recognised under the FRA in Maharashtra till 2012 were against the provisions of the Act. This amounted to 14,668.96 ha and included cases where individual rights were recognised over more than 4 ha of forests, or where tree cover was present prior to 2005, or in 2012, and would likely to be deforested in the years to come.

Forest rights activists have, on the other hand, been cautious of the use of satellite imagery as the exclusive basis for ascertaining the veracity of individual claims. “Satellite imagery, particularly for small patches of land, is useless in the absence of ground truthing, which should be done at the time of field verification of each claim. This is why the FRA not only provides for a transparent, gram Sabha-based process, including physical verification of every claim, but also permits use of satellite imagery as only one of over 13 types of evidence out of which any two may be submitted in support of a claim,” noted the response to TERI’s study by Campaign for Survival and Dignity, a nationwide network of forest dwellers in India.

In the case of the Maharashtra study, for instance, the assumption that land under cultivation would be devoid of tree cover displayed unfamiliarity with tribal culture and practices, where interdependence of agriculture with forests is well known. Similarly, BISAG’s maps were challenged in the State High Court on the grounds that the hasty manner in which the exercise had been carried out had led to wrongful rejection of several genuine claims. The High Court directed the state to review all rejected claims and consider all evidences that are acceptable under the Act and not just BISAG maps, in arriving at a decision on the claims.

“The problem with the use of satellite imagery to verify claims is that the state tends to monopolise it, use it in a non-transparent manner, and then claim that it is 100 per cent robust and objective,” says Sharachchandra Lele from Bengaluru-based ATREE. “If carried out in an independently regulated, participatory and transparent manner, the technology (keeping its limitations in mind) can go a long way in making the claims process more reliable and publicly trustworthy,” Lele adds.

Narmada model: Showing the way ahead

A number of villages in the Narmada district of Gujarat are showing the way in establishing a transparent and objective process for the verification of claims using satellite imagery. Facilitated by the Vadodara-based non-profit ARCH-Vahini, Forest Rights Committees of more than 150 villages in the district learnt the use of GPS and mapped the plots claimed for individual occupation and cultivation in their respective villages. The mapping results are superimposed on the satellite images of 2005 to ascertain the cultivation status of land in 2005 and also of 2009 to confirm the possession of land when the Act came into force in 2008. 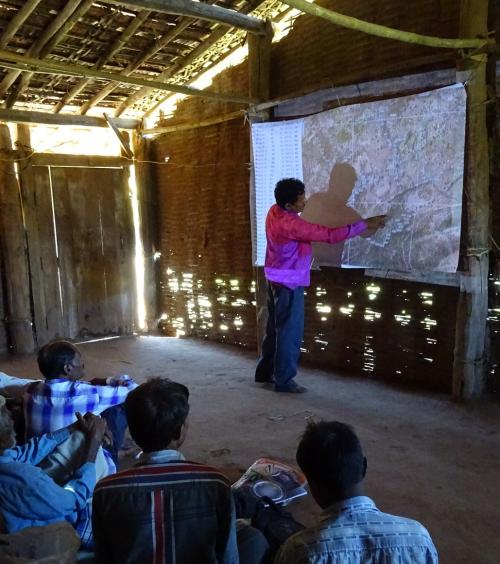 On November 27, 2016, the Gram Sabha of Mathavali sat in the house of one of its members and watched the maps of their claimed lands on a big screen, projected on a white sheet against the mud wall of the house. Every claimant got an opportunity to see the status of their claimed plot in 2005 versus 2009. If the land, partial or total, within the claimed area showed any difference in tree cover from 2005 to 2009, the claimant was asked to explain the difference. Interestingly, a few claimants admitted to clearing some forests in the hope of expanding their cultivation land. The decision, in such cases, was to withdraw the excess area from the claim.

There were others who had an explanation for the difference. “The trees on my farm bund had grown during this time,” explained one member. It is not the most difficult task to ascertain the veracity of such statements in a village gathering, and thus, if found to be true, such claims were given a go ahead by the Gram Sabha and forwarded to the Sub-Divisional Level Committee (SDLC). Some villages such as Kanji have also identified plots which had been cleared for cultivation by its members after December 2005 and decided to reject claims over such plots. “We plan to convert such plots into plantations of bamboo,” says Amir Vasava, community leader from Kanji.

The State Level Monitoring Committee (SLMC) has taken heed of the community-led process in these villages and selected Narmada district as a pilot for verifying claims on the basis of GPS surveys and satellite imageries. It decided to take technical assistance of the GEER Foundation, an autonomous body of the state’s forest department, for independent re-verification of the claims based on maps and GPS data provided by the Gram sabhas. “GEER foundation has completed the re-verification process for 50 villages (4,000 claims) and we have received official communication that it has found close to 97 per cent claims to be genuine,” informs Ambrish Mehta from ARCH-Vahini.

Establishing a transparent and objective process using satellite imagery can be a time-taking exercise and will depend on administrative will, among other requirements. There is evidence emerging from the ground to suggest that a combination of technology and community-owned processes can be effective in dealing with false claims. What such an approach will, most importantly, ensure is that the genuine claimants are not denied their legitimate rights on forest lands. That’s what should make the exercise worth it.