Stigmatising the powerless is not the way to a cleaner India, but only a more ashamed India 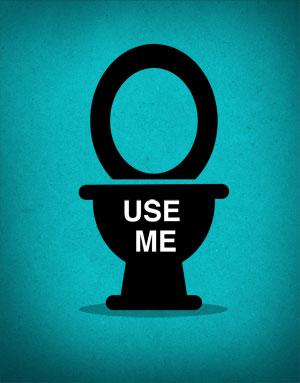 What makes people change their behaviour? Is it education? Is it the availability of options? Is it societal pressure? Is it the fear of penalties? Or is it all of these and more? This is a zillion dollar question for policy-makers trying to curb climate change or stop open defecation.

Take the matter of toilets. Getting people to build and use them is turning out to be the biggest conundrum. Mahatma Gandhi had said that sanitation is more important than independence. Lack of sanitation is leading to avoidable deaths of infants, and underweight and stunted children. This is unacceptable.

The good news is that the government of India has set itself an ambitious goal to end open defecation in the country by October 2, 2019, Gandhi’s 150th birth anniversary. After many years of unsuccessful toilet-building programmes, the government has accepted that its goal is not to build toilets, but to increase their usage. In other words, people have to change their behaviour and begin using toilets. In fact, the government now wants to count usage and not toilets in its surveys. This is not a small change.

Report after report has shown that toilets are built, but not used. The 2015 report of the Comptroller and Auditor General had found that 20 per cent of the toilets built under government programmes remained locked or were being used as storerooms. In 2015 again, the National Sample Survey Office recorded the use of toilets in 75,000 households in 75 districts. The results were stark. In a few states, including Sikkim, Kerala and Himachal Pradesh, 90-100 per cent of the toilets built were in use. But in many states the usage was low. In economically poor Jharkhand, it was below 20 per cent. Even in progressive, more literate and relatively rich Tamil Nadu, toilet usage was just 39 per cent.

How, then, will usage increase? What will drive the change in behaviour? This is not an idle sociological question. It is about the politics of development.

My colleagues, who investigated this, have found that state governments, pushed by the ambitious and much-needed targets set to make India open-defecation-free, are using name-and-shame as one way to bring about this change. They are pushing towards making open defecation socially unacceptable. Haryana (a successful state in terms of toilet usage), Uttar Pradesh (a dismal failure), Madhya Pradesh, Chhattisgarh and a few other states have passed bills making it compulsory for anyone contesting panchayat elections to have a functional toilet at home. Many districts are taking this approach forward by blowing whistles at people defecating in the open, publishing their photographs in village billboards, cancelling their ration cards or taking away other government benefits.

In Rajasthan’s Pratapgarh district, this aggressive drive has had tragic consequences. Women defecating in the open were being photographed by government officials. There was protest and one man died. When my colleagues visited Mehtab Shah Kachhi Basti—literally meaning the illegal settlement—they found that women had little option but to defecate in the open. One, they are poor. Two, they have no real home to call their own; they have no land on which they can build a toilet. Three, they have no running water. Even the community toilet is inadequate to cater to the 3,000 people living there. Worse, its upkeep is pathetic and it has no water.

But this does not fully explain the habit of open defecation. After all, people buy mobile phones or bicycles before they invest in toilets. So, what will create the demand for toilets?

I believe this issue needs to be discussed openly and much more furiously. It is critical to invest in the software of behaviour change. This means doing a lot more to build awareness about the health impacts of poor sanitation. My own research shows that this link is known only in terms of policy; not in terms of actual data, which will build health awareness to drive behavioural change. Tobacco is one case where behaviour has changed. This is because there is no longer any doubt about the ill-effects of tobacco. We need the same with toilets.

Today, the government’s Swachh Bharat Mission accepts this and even provides money for what in officialese is called intensive IEC (information, education and communication). But its own data shows that in 2016-17, the government spent 0.8 per cent of its allocation on IEC, against the 8 per cent it had provided in its guidelines.

It is clear subsidising toilet construction is not enough. Much more needs to be done in terms of incentives that make people change their behaviour. In places like Mehtab Shah Kachhi Basti, the government will have to provide options for affordable community toilets that are clean and well-maintained. This also means recognising the crucial connection between water and toilets.

However, we still need deterrence. There is no doubt that societal pressure works. But we have to make sure that we do not end up blaming or shaming the victim. Stigmatising the powerless is not the way to a cleaner India, but only a more ashamed India.