They did the impossible on land that held no hope 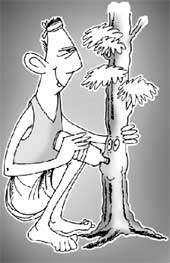 i want to share with you the triumph of cussedness. You can call it green cussedness if you will. There is no other word to describe what happened to a small plot of five acres in the little known village of Rewasan in Mewat lying just 60 kms from the country's capital.

The abject poverty in the village is largely due to the extreme salinity of its soil and water, combined with a three-month stint of water-logging, when water stands stagnant up to a height of 2-3 feet on the land. When it finally does get absorbed by the soil in late September or October, it becomes saline like sea water. Even then it does not penetrate more than four feet below ground level.

Naturally one can not grow trees in this soil. So say all the experts. The three worst attributes, which make land unfit for plantation, are present here in abundance. Soil salinity, high ground-level saline water and water-logging. All one can hope to grow here is ' dhaincha ' and sometimes, low quality paddy.

Six years ago, we dared to dream an impossible dream here. We acquired five acres of land and decided to plant a mini-forest on it. A tapovan , to be exact. We went looking for permanence on a land that could only support something as transitory as a seasonal crop of ' dhaincha '. We wanted a tapovan of trees that, once nurtured in infancy, would outlive us, far into posterity. We wanted it, not for philanthropy or ecology but for reasons so personal, that they admitted no compromise.

We started by consulting experts on soil and environment, agriculture and horticulture. Suspending disbelief, we allowed ourselves to be taken on any number of costly rides, bringing in fertile soil and sweet water and pumping out stagnant water, to see it come back each time to square one. Spurred by talk all around us, we also consulted an expect non-governmental organisation about rainwater harvesting. We were told that our land did not have the requisite contours. By the end of the year, we had learnt two important lessons. One, never try to alter the soil or water conditions of a given land. Two, expect no help from the administration. In our case it meant, no drainage ever.

With no support from sense and sanity, we turned, with relief, to sensibility and faith. Almost immediately two things happened, apart from our winning over the villagers. That September, three ' jhaun ' bushes suddenly sprouted out of the recently water logged, saline soil. Then we ran into an eccentric bureaucrat, who though an expert on salinity, was not unwilling to put his expertise to test and, if necessary, to question and modify it. He took the sprouting of the ' jhaun ' bushes to be a sign from nature, in the same way as we did. The villagers found our antics even more lovable than before.

We began to plant trees in sweet water-leached beds. Some tried and tested varieties, suggested by our optimistic expert and some untried ones out of sheer cussedness. We planted ' keekar ', bottle-brush, bougainvillea, ' kaner ', bamboo, hibiscus and ' shireesh '. Always filling the gaps with ' dhaincha ' and welcoming the ' jhaun ' bushes, which continued to come up at random spots. Keekar followed suit. By the end of another year, we had learnt a third lesson, perhaps the most important of all.

Whatever the scientific know-how available, one can never predict accurately, just how saline a particular centimetre of soil will be, on a particular day. Continual leaching by sweet water further confounds the design, so one has to take the trees as one's only guides. The lesson was, let the tree grow wherever it sprouts. Never try to transplant it. Let it truly be a tapovan .

Sensing that we felt irked by its temporariness, the ' dhaincha' decided to grow almost permanent. Growing tall and heavy like trees, the ' dhaincha ' plants flourished for more than six months out of the year. Many untried varieties of trees also took root.

Six years passed. Six years of pig-leaded labour and reticence to write or talk about it. Then a few days back, I saw something that has made me record it in writing. I saw three ' khejri ' trees peeping out of the land at one end and three ' neem ' trees at the other.

This was a dream, we had not yet dared to dream. But now we will follow their lead and plant more of their kind close to them, hoping nature will do the rest. Who knows, someone may soon find it politically profitable to opt for large-scale drainage in the area and the revolt of the trees may pay off.

The author is a well-known Hindi fiction writer