Guardians for the future

Today, vast factory trawlers are vacuuming every living thing off the floor of the oceans. Toxic wastes are being dumped on poor communities whose governments turn a blind eye. Millions of hectares of irreplaceable primeval forests are purposely being burned every year to make way for cattle ranches. These are crimes that will not only injure future generations but destroy any future at all for millions of people. Still, in most countries there is no institution or person with the job of defending the rights of those future generations. But tomorrow, there could be.

The World Future Council is calling for Ombudspersons for Future Generations. These would be guardians appointed at global, national and local levels whose job would be to help safeguard environmental and social conditions by speaking up authoritatively for future generations in all areas of policy-making. This could take the shape of a parliamentary commissioner, a guardian, a trustee or an auditor, depending on how it best fits into a nation’s governance structure. This person would facilitate coherence between the separate pillars of government to overcome single issue thinking, and hold government departments and private actors accountable if they do not deliver on sustainable development goals. 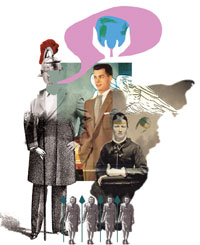 The Rio+20 Summit in June this year will have Institutional Framework for Sustainable Development as a major theme. The Zero Draft—Rio’s official outcome document—contains reference to “an ombudsperson or high commissioner for future generations to promote sustainable development”. However, a number of countries are trying to remove this concept from the draft. Why would any nation be against such a win-win proposal?

Their main concern seems to be the proliferation of bureaucracy and a drain on existing limited resources. However, the opposite is likely to be the case since an ombudsperson would actually bring more coherence to policy making. Current, narrowly defined policy-making approaches often lead to unintended negative consequences and unnecessary costs in redressing these. Integrated thinking and long-term time horizons can help avoid these, often even in the short-term. A small high-level office with a cross-sectoral mandate, working in cooperation with existing institutions, agencies and stakeholders, can save a nation considerable costs quickly and avoid a lot of grief soon after.

Another worry appears to be that an ombudsperson might favour the future over the present. Given that we humans already live well beyond the carrying capacity of the earth, an environmentally restorative change is essential if lives and livelihoods are to be maintained and cultivated. Translating the interests of future generations into policies and actions simply means choosing more sustainable solutions today. Industrialised countries with ecological footprints, in most cases exceeding five times their biocapacity, urgently need an institutional mechanism to help reorient their economies to ensure sustainable futures even for their present generations.

Developing countries and their negotiating groups such as the G77 can take credit and ownership of such an initiative since it arises in large part from the wisdom of traditional cultures like theirs, that have flourished in harmony with nature for thousands of years, demonstrating the value of an institution of moral authority or conscience keeping in creating policies and taking decisions geared to the needs of a sustainable future.

On retirement, great political leaders voice their regret that they had no time to think, no time to reflect on the consequences of their decisions, particularly with respect to the state of the world they are leaving to their grandchildren. The appointment of guardians for the future, by whatever name, would not only remove the reason for such regrets, it could leave behind a legacy that future generations would honour.