I think, therefore I get well

Cures based on the mind-body nexus are gradually finding favour 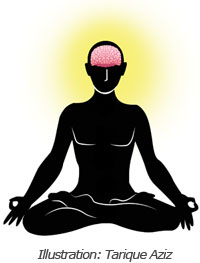 We are all pill-poppers now. Be it a minor indisposition like sore throat, or a dreaded affliction such as cancer, we have somehow come to set great store by the blessings, however mixed, of modern theories of disease and cure. Traditional healing systems, on the other hand, are either indulged as old wives’ tales or condemned as quackery. A cardinal point of departure between the modern and traditional take on health and illness is about how they view the mind-body relationship. Ever since Rene Descartes divorced soma from psyche four centuries ago, modern medicine has refused to acknowledge any role for the mind in the healing process. For traditional theories of sickness and healing, on the other hand, the mind has been a Petri dish for all bodily cures.

For early therapists like shamans, druids and witch doctors, healing was more about tricking the mind into resisting or ridding the cause of disease; drugs concocted from herbs or metals only served as catalysts to that end. In fact, it wasn’t until the advent of modern ideas about the origins of disease, such as the germ theory, at the fag end of the 19th century that modern medicine began to supersede the mind as the preeminent agent of healing.

But it seems the pendulum is now beginning to swing in the other direction. British science writer Jo Marchant’s Cure: A Journey into the Science of Mind over Body is the latest portent of that change. Marchant travelled all over the world collecting the experiences of doctors, researchers and patients who have used the crucible of mind to brew their potions. She describes, among other things, how hypnotism is being used as an effective cure for irritable bowel syndrome, or, how some researchers are exploiting virtual natural landscapes as balms to lessen the pain of burn victims. Equally fascinating is Norman Doidge’s The Brain’s Way of Healing. Like Marchant, Doidge, a Canadian psychiatrist, too globe-trekked in search of miracle cures. His cabinet of curiosities contains gems like the American physician who, with the help of visual stimuli, can hoodwink his brain into blocking out extreme pain, or how a South African suffering from Parkinson’s uses thought experiments to make the brain “forget” his involuntary twitches.

Both cases illustrate a new science called neuroplasticity, which is based on the idea that healing can be inspired by thoughts customised to goad the brain into rewiring its circuitry.

The challenge to Cartesian dogma is not new. The 17th century Austrian physician Franz Mesmer’s experiments to cure patients by dangling magnets over their bodies, or Sigmund Freud’s explorations for a non-physical basis of illness through what he called the “talking cure” are all part of this history. More cannon fodder came with the advent of psychosomatic medicine in the 1940s and 1950s, followed by Hans Seyle’s exciting probes into the physiology of emotions. But it wasn’t until the recent insights into the workings of the brain and immunity that people began to take notice. Research over the last decade has shown, for example, that placebos stimulate neurotransmitters like endorphins that can dull the sensation of pain or that depression can blunt the edge of immunity.

Despite these vindications, however, a majority of physicians and scientists remain skeptical. And yet there are cases of miraculous cures from around the world, especially of spontaneous remission in cancer patients. How does one account for such incidents? A mathematician may explain them as one in a million chance events, but for a believer, they are nothing short of miraculous. In any case, accident or miracle, someone still has to explain why such things happen to some, and not to others.

So far the odds look promising for the mind-body cleavers but surely not compelling enough to shake centuries of orthodoxy. The mind-body knot is a complex one. Who knows it may eventually turn out that the two are not even hyphenated, let alone split, but more like the Klein bottle, a mathematical object in which inside and outside are part of a seamless whole.