How many trees for a political tamasha?

Tamil Nadu chief minister Jayalalitha Jayaram's self-boosting extravaganza in Madurai has cost the nation an estimated 40,000 litres of precious diesel besides other less-easily computable natural resources such as wood for posters, cutouts and barricades 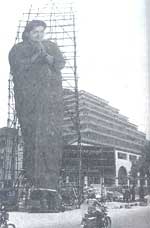 On JUNE 24, Tamil Nadu governor Bhishm Narain Singh inaugurated a national seminar on diesel conservation in road transport and exhorted bus and truck operators to conserve fuel. Just four days later, the ruling AIADMK arranged a massive jamboree at Madurai, with an eye tilted at the Guinness Book of Records. An estimated 10,000 vehicles converged on this temple town for the vetri mahanadu (victory convention).

This is not the first time that politicians have organised massive rallies to buttress their ego or to score points in the number game. Devi Lal, Chaudhary Charan Singh and MGR (M G Ramachandran) made their name organising extravaganzas and now, Jayalalitha has joined their ranks, capitalising on her film-actress image and projecting her image as puratchi thalaivi (revolutionary leader). The Madurai convention was an exercise in reinforcing this image.

In a bid to deflect opposition criticism, the organisers of the Madurai convention publicised their balance sheet which showed that even after an expenditure of Rs 2.37 crore, the party has Rs 1 crore left in its kitty. What the balance-sheet didn't say is that the nation's oil reserves are poorer by thousands of litres of fuel. A simple calculation can prove the point. The Indian Express reported 400 buses were used to transport the faithful from Madras to Madurai. Because there is a tendency to exaggerate on such occasions, 200 would surely be a safer figure. On an average, a bus uses one litre of diesel to cover 5 km. So, 40,000 litres of diesel would have been required for the 200 buses to cover the 1,000 km from Madras to Madurai and back. There were also a considerable number of other vehicles that converged on Madurai from other parts of the state. Then, of course, there are the millions of posters and scores of giant cutouts put up all over the city. Some may argue that the wood used for erecting barricades and cut-outs can be reused. But the same cannot be said for the tonnes of paper used to make posters.

The cost of such conventions cannot be calculated in mere financial terms. They need to be assessed in terms of their ecological cost for only then would the public realise that the highly publicised afforestation measures in the state can be brought to nought by one ill-considered megameet.