If you want to read a book

...the near universal necessity of being the owner of a book to read it needs immediate and drastic revision 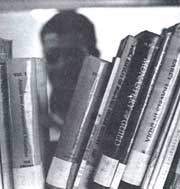 IF WE are to have 3 books for every Indian child, there won't be a single tree left standing in the country. We simply do not have enough wood for so many users. If the massive drives towards total literacy and universal primary education are successful, we might soon find that we have a nation full of readers and not enough paper to fulfil the need we have ourselves created.

This does not mean that the future is bleak. What it implies is that the whole issue of paper needs a great deal of re-thinking: its production and use for educational purposes, especially in the form of books. Is it, for instance, possible to use recycled paper on a large scale? Can government institutions encourage the use of recycled paper?

A beginning has already been made in a recent decision of the National Book Trust to produce more of its children's books on recycled paper. The Trust has discovered that the bogey of recycled paper being more expensive and incapable of reproducing quality colour printing does not hold true any more. If children's books are not visualised as something glossy, this certainly opens up avenues to combat a possible paper famine.

A second possibility would be to launch forestry programmes especially devised with our paper requirements in mind. Work is already being done in the country on the concept of "paper harvest", although it is not clear how long it will take to be actually put it into practice on a large scale.

The way we use paper is far more important than how it is produced. In the recent International Children's Book Fair held in Bologna in April, I came painfully face to face with the reality that Indian children will probably never get the kind of handsomely produced books brought out in the West. Even if we are able to find ways of producing such books, how on earth would they reach the kind of children who really need them?
Part of the solution lies in getting over the belief that to read a book is the same thing as to own it. The need of the day suggests the notion of sharing books on a large scale. It would be far better if there are more titles with fewer copies circulating among a large number of readers rather than fewer people having copies of the same book. The latter is, unfortunately, the case, especially with textbooks.

Of course, public libraries have been around for a long time. Although there are district libraries and even block-level libraries in some villages, the present situation calls for a more powerful and effective library movement if the efforts to spread and sustain literacy and education are to take any roots. Such a movement can take forms very different from the near-defunct government library system. A major difference has to be the involvement of the people: parents, teachers, learners and readers.

This is not a very new idea and precedents exist. Take for example, the Bunko library movement in Japan. Bunko, incidentally, means a home or community library. The large population of educated housewives in Japan (as also in India) invited neighbourhood children to their homes and encouraged them to read books. Often, they read aloud to the kids and helped them find interesting books. Those children who did not want to read were under no pressure and could simply hang around if that is what they wanted.


Another example of people driven to share books comes from the war-torn days in Beirut where some parents found a novel way to survive in bomb shelters without going mad with fear -- read books aloud. This caught the people's imagination and every time there was a air raid siren, candles and books began to be taken into shelters. With time, portable library systems emerged whereby books were actually carried to the readers.

In India, too, efforts are underway to encourage the sharing of books on a large scale. A system of libraries, called the Jan Jagran Kendras, is being tried out in the district of Ajmer. Combining aspects of both a stationary and a mobile library, the Kendras seek to deliver books to a large number of people. Another effort, the Readers' Clubs, launched by the National Centre for Children's Literature, involves schools to volunteer in the setting up of a reading centre.

Another kind of book sharing involves textbooks. Textbooks in Cuba, for instance, are of a very high quality -- beautifully designed, well-printed and hardbound. How does Cuba manage to achieve this? Simple. The textbooks do not belong to the children and they are not allowed to take them home. Successive generations of children use the same sturdy, high-quality textbooks, until 4 or 5 years later it is time to revise them anyway. Surely, this should not be too difficult for India to emulate, especially in the government school system.

Such an altered perspective would not only reduce the amount of homework Indian schoolchildren have to cope with, it would also economise on the limited paper available and still provide children high-quality textbooks. Other ways can also be found of economising paper in education. Greater use of slates, for example, would save literally thousands of trees.

Textbooks could also be redesigned in a way so that a great deal more is said in every page. Work has already been done on this front in innovative educational programmes like Prashika by Eklavya, a non-governmental organisation. If such practices were to spread, they would not only prevent a paper famine but also provide Indian children high quality books to learn from.

Subir Shukla is a freelance writer