In praise of open-source innovation

Everyone is talking about India’s sharp critique of the global patents regime at the WTO TRIPS Council meeting in mid-June. It was a well-argued and forceful presentation that made a strong case for open-source innovation and slammed the mania for intellectual property rights as end in itself. TRIPS is the acronym for the agreement on trade-related aspects of intellectual property rights (IPRs) that was bulldozed through by rich nations in 1994 and has been used by them to bully and badger developing countries to seek rents for patents and IPRs.

It has imposed a huge cost on the latter.

The Indian representative to the TRIPS Council meeting told the delegates that IPRs should contribute to the promotion of innovation and aid the transfer and dissemination of technology. That’s an observation that would not have gone down well with the US, EU and other nations that belong to the club of rich nations and are baulking at transfer of knowledge even in the critical area of climate and environment-friendly technologies. 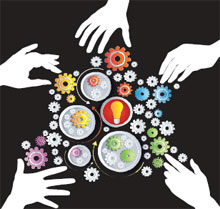 What was more telling was India’s pointed comment that there is little evidence to prove IPRs have a positive effect on economic development. The arguments were well marshalled. India used analysis of historical studies by Boston University law academics James Bessen and Michael Meurer who concluded that “nations with patent systems were no more innovative than nations without patent systems”. Others like Michele Boldrin and James Levine have also shown there is little historical evidence to show that innovative monopoly is an effective method of increasing innovation. Besides, companies are also discarding the notion that patents are essential to prosper in the marketplace.

This is specially true of computer firms and software developers. Take the mission statement of their industry association which states: “We do not think it is an accident that innovation has flourished in a society that values an open, competitive economic marketplace, nor where original independent and free speech are enshrined in law. Therefore, our commitment to vigorous competition, freedom of expression, and openness is a natural product of the understanding of what has helped our industry thrive, and what it needs to continue to do so.” This philosophy may not be practised by many of these firms—Microsoft is an egregious example—but they have been vocal in complaining about patent lawsuits that are taking up time and billions of dollars in costs.

The most telling argument made by India was to highlight the differing paths followed by two of America’s most innovative clusters: Silicon Valley centred round Stanford University and the Route 128 corridor in Massachusetts that drew its strength from MIT. The Indian spokesperson pointed out that the reasons for the success and failure of these clusters are germane to the discussion on the TRIPS Council agenda item raised by the US and Taiwan. They have claimed that high levels of IPRs are essential to spur innovation. The two US innovation clusters started together in the 50s with heavy investment from government and without any market competition. While Silicon Valley has flourished and become an iconic success because of its culture of openness and exchange of information, Route 128, which fostered vertical integration of firms, based on a philosophy of secrecy and tight walls of IP protection, has declined.

India has made it clear it will continue to support open-source research and development. And its tough stance at the WTO meeting is a clear message that it will not be bullied on IP issues by the US.