Life and times of Lado Sikaka

The forest will watch out for his children after he is long gone, believes a Dongria Kondh 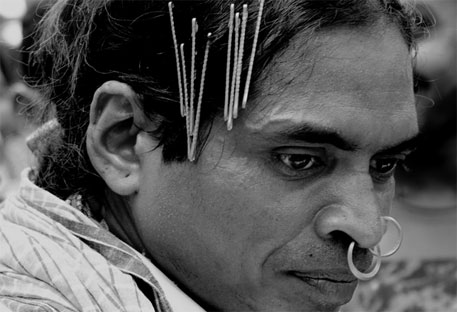 When I ask Lado Sikaka how old he is, he smiles, “mui ki januchi (how do I know?)... may be forty, fifty or hundred.” We are perched on rocks strewn around a perennial stream deep inside the Niyamgiri hills of Odisha, a dense tropical forest spanning 240 sq km across Rayagada and Kalahandi districts.

The silence is deep, punctuated by voices from a loudspeaker that a brisk wind carries to us. India’s first environment referendum  is under way a short walk from here. The Supreme Court had left it to the forest people to decide the fate of proposed bauxite mining on the hills they consider sacred. At stake was 72 million tonnes of bauxite that global mining and metals giant Vedanta wanted for its alumina refinery next door.

The unlettered forest dwellers spoke with remarkable clarity. They tried best to explain to the world, directing words at the judicial supervisor at the village council meetings, that forest hills are their ‘ma, bapa’ (parents). Their worship is not confined to any temple—for there are none. It’s about expressing their gratitude and love for the forest, hills and streams that have sustained them for generations.

Lado Sikaka is proud of this inheritance. He speaks like a leader, smiles like a child and has a deep contempt for what we call civilization. “I can never spend a night in a city... trains buses cars, the noise. I feel breathless. You need money for everything... to drink water, even to use the toilet. Niyamgiri is my peace.”

We continue to speak, my Hindi translated into Odiya by a friend. The hill tribe’s native language is Kui. Lado speaks in Odiya but all along I worry I am missing something essential, that Odiya is limiting his expression.

Lado is the mandal jani, head of Dongria Kondh tribal clans, a community of 8,000 forest dwellers living inside the forest hills of Niyamgiri. The Dongria Kondhs are now known to the world as the “Avatar” tribe after the blockbuster James Cameron film about an extra-terrestrial tribe battling a mining company.

For over a decade the Dongria Kondhs have been fighting tooth and nail, attempted intrusions by the mining giant Vedanta and the state government of Odisha. They have stopped construction of roads inside the forests. CSR goodies from Vedanta, sewing machines and solar panels, are gathering dust outside their homes. A child care centre constructed by the company in 2010 looks like a haunted house. 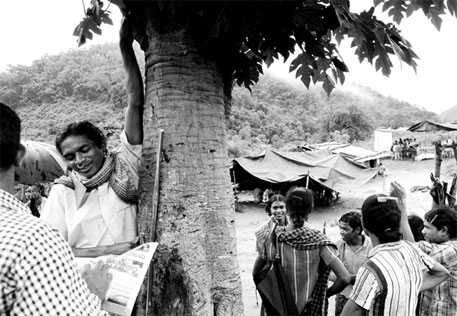 In August 2010, on his way to Delhi to speak against the mining project, Lado was abducted from the foothills of Niyamgiri. His captors, plainclothes policemen, released him four days later but not before thrashing him severely. “They asked why I am opposing the project. They said you have links with Maoists and we’ll take you to Andhra Pradesh and slit your throat.”

“They beat me on my arms, back and legs with a lathi. I was senseless and then they sprinkled water on my face.” Lado pauses and says, “they asked, beer peibu ki? Salpa peibu ki (a local brew prized by the Dongria Kondh)” (Will you have beer or salpa?). “I can have some salpa, I told them. They got me rice water.” When offered a choice on meals, Lado asked for mandiya jau and kosla bhat (native millet preparations). “They got me hidli,” says Lado emphasizing on the 'h' (hidli is idli—steamed rice cakes).

As we talk, men in uniform from the central paramilitary forces and Odisha’s special operations group walk past. The village councils meeting are being held under tight security because of alleged Moaist presence in the area. Even a few months ago, during combing operations inside the forest, the forces were looking for Lado Sikaka. He recounts an incident.

While returning to his hamlet one afternoon, the forces stopped him.

“What is your name?”

“Ramachandra Sikaka,” Lado laughs as he recounts his reply.

“Do you know who Lado Sikaka is? Can you take us to his house?”

“Oh, he is off to see his mother-in-law for a few days as she is unwell,” he had replied.

Now Lado Sikaka is a known face. He has been attending every village council meeting along with fellow Dongria Kondhs, walking for hours to reach the venue in time. “Are you scared they might label you a Maoist and arrest you again?” I ask.

“Did a Maoist meet the governor at his house last month? Did a Maoist meet Rahul Gandhi when he came to Niyamgiri?” he retorts. Lado met the Odisha governor as part of tribal delegation to ensure that village council meetings are held in free and fair manner. In 2010, after he was released by his captors, Lado shared the dais with Congress vice president Rahul Gandhi. “I will be your sipahi (foot soldier) in Delhi,” Gandhi had famously told the Dongria Kondhs.

‘Gotey: they are all one’

Lado, like other unlettered forest dwellers of Niyamgiri, has little understanding of the myriad government institutions that have come to determine his life –the state government pushing the bauxite mining project with all its might, the Central government opposing the project for a reason no less than Rahul Gandhi championing the cause of tribals, and the Supreme Court asking the tribals to decide if mining will infringe on their religious and cultural rights.

Lado cannot comprehend the many arms of democracy. He is mistrustful and repeats the word “gotey”, meaning they are all one, all against the forest people, all for mining. The mistrust means any development work, be it roads or schools, are suspect in his opinion.

When I ask why he doesn’t want roads, he snaps without thinking, “we walk up the hills. We don’t have cars or bikes. What will we do with roads?”

Lado has been running fever for the past few days with severe body ache, symptoms suggesting malaria, common and at times deadly inside the forests. “What about health care centres?” I ask him, “don’t you need doctors here?” “We don’t want anything from a durniti sarkar (corrupt government) which wants to sell our forests. We’ll see if another government comes but it has to first assure no one will touch our hills.”

I remember the conversation with the block development officer who rued his good office is unable to spend development funds because of resistance from the Dongria Kondhs. He agreed the state has been a little too late to show its benevolence. The proposal for development came, in Lado’s words, “by holding Vedanta’s tail”. 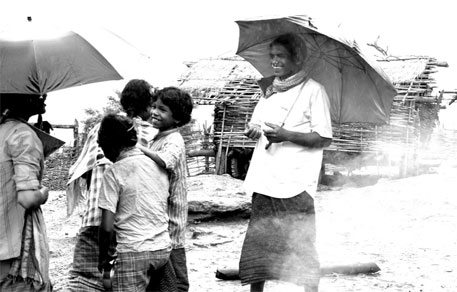 Born of the forest

The Dongria Kondhs' love for the forests and hills can confound an outsider. They worship the hills as the abode of their supreme deity, Niyamraja, the protector and preserver of the forests and its many bounties. According to Dongria Kondh mythology, Niyamraja earned the right to rule over the forested hills after he correctly predicted the number of seeds in a cucumber and a pumpkin.

When I ask Lado where Niyamraja is, he looks around the forest hills and says “everywhere—all the hills you see around.” That the abode of Niyamraja—and the place of worship—can be so fluid has confounded many. Gopinath Mohanty in his famous Odiya classic, Paraja, published in 1945, recounts an exchange with a census official. When asked what their religion is, the Kondhs' reply was “mountain”, a category non-existent in the official’s list.

When the Vedanta case was heard by the Supreme Court, the Odisha government argued that the Dongria Kondhs worship a particular hilltop of Hundijali. The tribes’ rights to worship their deity will not be affected by mining which is 10 km away from Hundijali, was the states’ contention.

“If you take away my arms or head and leave the rest of my body, will I survive,” asks Lado in response. Later, on the day of the village council meeting in Lakhpadar, Lado told the district judge who was appointed observer to the proceedings, “you lock up your gods in temples, our gods live in the open”.

Dombu Prasaka, a seventy year old Dongria Kondh gave word to his worries in a beautiful song recorded in 2007, a few years before he died. He was a Dongria Kondh shaman, a medicine man, who sang the secret to their lives and had a few questions:

“Niyamraja created fruits in the hills, grains in the plains
He is the first of the Dongria Kondh
No one knows his story, lakhs of people are unaware
I will sing, I will sing why the outsiders must spare our land
After making pineapple, mango, jackfruit and grains
Niyamraja said to us ‘live on what I have given you’
Niyamraja decided where there would be fruits and grains
Which seed will be soft and which one would be hard
Niyamraja is crying today, the hills will turn into mud
The rocks will crumble and everyone will die
Will there be any rivers left if there are no streams?
Will there be any streams left if there are no hills?
How will everyone get to know of Niyamraja’s miracles?
If Niyamgiri will be not there, I will sing, I will sing
What will we do without the fruits, grains and buffaloes?
What will we do without Niyamgiri?
What will the animals do without the big forest?
What will we do without its plants that save lives?”

The visceral connection of the Dongria Kondhs to the forests is similar to that of pre-agricultural societies, like the Bambuti pygmies of Congo, narrated in intimate detail by Colin Turnbull in his 1962 classic, The Forest People. “The forest is a mother and father to us,” a pygmy told Turnbull, “and like a father and mother, it gives us everything we need—food, clothing, shelter, warmth and affection. Normally everything goes well because the forest is good to its children... when something big goes wrong, like illness or bad hunting or death, it must be because the forest is sleeping and not looking after its children. So what do we do? We wake it up. We wake it up by singing to it, and we do this because we want it to awaken happy. Then everything will be well and good again.”

Lado Sikaka shares the conviction of the Bambtuti . He has no regrets that his seven year old son, Dombu, ran away from the government hostel to return to the forests. “He didn’t learn a thing except a few Odiya letters in two years. This education has no use for us. I taught him dongar (shift and burn cultivation on hill slopes), how to plant ginger and turmeric, to separate the edible roots from poisonous ones.”

I ask Lado how he got married to his wife Sonari. “By paying a fat bride price: two buffaloes, two goats, a few chickens and two tins of mahul, a local brew,” he tells matter-of-factly. Did you fall in love and run away with her, I ask. He blushes, “sab ami koibu ki?” (Why should I tell you everything?)