Mass destruction knocking at the door

The threat of terrorists using biological weapons has become a reality. How prepared is India to a fight a possible germ war? 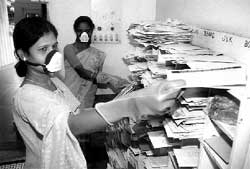 The threat of terrorists using biological weapons has finally become a reality as anthrax-laced letters continue to inflict American citizens door by door, immediately after the September 11 attacks. Till now six confirmed and 36 suspected cases of anthrax have been reported in the us within a span of 10 days in the current outbreak. As we know, in a biological war, living organisms like bacteria, virus, fungi and rickettsiae and their natural byproducts (toxins) are used to cause large-scale death or disability in human beings, animals and even plants.

India has long been a victim of terrorism, and has taken this threat seriously though to find that it is awfully equipped to fight such an attack. For a country that has not been able to detect and fight periodic epidemic outbreaks, the threat of terrorists using biological weapons is certainly a challenge. Given past records of fighting such outbreaks, our medical infrastructure needs complete greasing. And it has to be done immediately considering the present situation and its hazards to both human population and to environment.

A sense of panic grips the corridors of the Indian health ministry which is still to identify an unknown virus outbreak in Siliguri, West Bengal that killed 37 people in February 2001. Its autonomous institution National Institute of Communicable Diseases (nicd) is suddenly stealing limelight in its recent campaign in making the political leadership aware of the threat of biological weapons. An organisation that hardly preferred to be in public limelight in the recent past and is still thrifty about sharing information on different disease outbreaks in the country is now ready to flood newspapers with threatening details of biological weapons. Its director has even speculated that the Siliguri outbreak could be a 'biological weapon attack'.
The threat of biological weapon is not only real but also cheaper. The difficulties of acquiring nuclear and chemical weapon capabilities due to their political and fiscal costs have made biological weapons a favourite of both States and Non-State Actors (nsa), comprising terrorists, religious cults, mafia syndicates and deranged individuals. There are a lot of factors that attract a terrorist group towards a biological capability or covert biological attack. Most important is its toxicity. It is estimated that one ounce of botulinum toxin can kill 60 million people if dispersed properly. World Health Organisation has estimated that 50 kg of virulent tularemia bacteria dispersed in aerosol form over a city of five million population can cause 19,000 deaths and 250,000 incapacitating casualties. One can imagine the level of casualty in a hypothetical scenario taking Indian cities like Mumbai or Kolkata as instance. The bustling crowds and proximity of inhabitants in these areas could help the agent to proliferate rapidly, taking its toll. There is no doubt it would make mockery of our civil health system and overall preparedness. These weapons kill people but cause no harm to installations, buildings and factories. Also their detection and identification are difficult. Biological agents could be produced in an antibiotic factory or in a brewery and can be delivered to mass destruction even by letters, packets, crop dusters or fertilisers and pesticides sprayers.
The twentieth century witnessed moderate use of this lethal weapon. During World War I the Germans used glanders against horses of allied forces. Before the World War II, the Japanese Army ran a top-secret biological weapon facility in Manchuria, where scientists cultivated deadly agents like plague, anthrax and typhus and also tested them on prisoners of war. During the war Japanese aircrafts dropped ceramic bombs containing plague-infested vectors on 11 Chinese cities causing an epidemic. In the early 1950s, with the fear of Germany's effort to achieve biological weapon, usa, England and erstwhile Soviet Union started their own biological weapons programme. These weapons were used in various theatres of war especially in Vietnam, Korea and Afghanistan by the super powers of Cold War era. This insidious weapon proliferated to countries like Iraq, Iran, Libya and North Korea. Reports indicate that currently 11 countries are pursuing offensive biological programme.

In the midst of all this, how prepared is India to fight such a deadly reality? What can answer this question is our past track record in managing epidemic outbreaks. Naturally India is considered an endemic region for animal anthrax in general and human anthrax in south India. The disease, currently in news, has never been contained in India in its natural outbreak. Statistics show that there are some 35 cases documented during the last decade and since 1953, some 182 cases of human anthrax documented.

Other major biological agents are plague, small pox and cholera. The most virulent Vibrio cholera invaded India in 1964 and the organism appeared in Delhi for the first time in June 1965 and became endemic thereafter. We all know that erstwhile Soviet Union made small pox (variola) virus a weapon and it might be now stockpiled by terrorist organisations. The most dangerous aspect of the two above-mentioned diseases is their susceptibility. Small-pox, unlike anthrax, is highly contagious and can spread from person to person. As a result the civilian populations are highly susceptible to infection. We have successfully eradicated this deadly virus in 1970s. If a sudden outbreak occurs, it will definitely cause mass causality.


It is vital to assess the challenges likely to result in the event of a widespread biological attack. An effective surveillance mechanism for detection and identification, physical protection and decontamination, and medical countermeasures are some of the necessary steps India should undertake. Still somewhat oblivious about the threat, India, under the auspices of nicd, has recently started working on a surveillance mechanism. nicd has suggested to evolve a national network though at present only states with international border have this surveillance system.

We have a well-developed biotechnology infrastructure with a number of pharmaceutical production facilities and bio-containment laboratories. There is also no dearth of qualified scientists to work on this. But till now we don't have a national preparedness agenda against biological weapons. The Defence Research and Development Establishment (drde), Gwalior, which is working towards the development of antibodies against anthrax, cholera, brucellosis, small pox and plague, is the only establishment that has developed chemical and biological protective gears like masks, detectors and suits. However, these protective gears are being supplied to defence personnel only. And it is a question whether a large number of masks or suits can be procured at the time of need.

Another constraint is in the sphere of medical countermeasures. Generally, it falls into two broad areas: prophylactic and pre-treatment measures taken before exposure and therapeutic measures taken after exposure or after the development of symptoms. In the first place vaccination is the preferred treatment, but it requires some advance knowledge of the biological agent used. Then is an antibiotic treatment followed by supportive therapy with specific antibiotics and antivirals. But India does not have that level of preparedness or infrastructure to face such eventuality. We have seen it in Surat during outbreak of plague and recently in Siliguri. Since most of the doctors of this generation have not come across any of these diseases in their career, it would be difficult for them to diagnose and treat immediately. A few doctors in their 50s or 60s might have seen a small pox or a plague patient. Moreover a disease in its epidemic form cannot be contained by inexperienced doctors and such situation could overwhelm the public health system. This could lead to a chaotic condition in the society. In a nutshell, the quality and spread-wise medical infrastructure of the country has to be totally renovated.

India needs a shift in its policy, which has to come from a strong political will. We have no comprehensive national policy to deal with biological warfare or terrorism. However, in the wake of the recent anthrax scare, or even before that, India's defence and medical establishments have been getting concerned about a future possible germ warfare. It is only if all the responsible agencies work in tandem that a future catastrophe can be averted.

The author is a Doctoral Fellow at the School of International Studies, Jawaharlal Nehru University, New Delhi