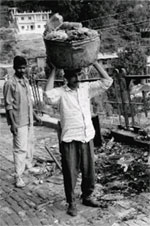 scavengery is a sardonic remnant of the days of Raj. May be it was the only alternative then to observe hygiene but its presence in today's context is highly uncalled for. The existence of this age-old inhumane practice is not only a stigma on scientific advancement but also on humanity. It is a violation of human rights particularly when we claim ourselves to be citizens of an independent nation commanding the largest democracy in the world.

The practice of carrying loads of night soil on the head is one of the abominable practices prevalent in the country. Under section (1), schedule 252 of our Constitution, the practice of carrying night soil has been referred to as "the blatant murder of human values". Keeping in view the Civilian Protection Act of 1955, a plan to emancipate scavengers from the practice of scavengery was launched by the central government during 1980-81.In Himachal Pradesh, this scheme was forced into action during 1983-84. But even after more than a decade, nothing has really changed. Even today, there are 1,062 families engaged in the vocation of scavengery throughout the state.

Until 1992, 12 towns were brought under the scheme wherein conventional lavatories were to be replaced with flush ones for which funds worth Rs 62.78 lakh were earmarked. The towns included Shimla, Chamba, Dharamshala, Kullu, Mandi, Nahan, Sundarnagar, Dalhousie, Dehra, Jawalamukhi, Palampur, Paonta Sahib and Rampur. In the first phase, at least a dozen towns were expected to emancipate scavengers but the dreams to put an embargo on scavengery almost turned sore as a large number of municipal committees showed a lukewarm response to the scheme. The municipal committees (mc) of Chamba, Dalhousie, Jawalamukhi, Kullu, Palampur, Sundarnagar and Paonta Sahib towns not only showed no response to the welfare-oriented scheme but also did not even bother to withdraw funds worth Rs 53.47 lakh which remained unused in banks for three consecutive years. Not only this, the mcs of Dehra, Dharamshala, Kullu, Jawalamukhi, Palampur and Sundarnagar, which were provided with funds worth Rs 10.57 lakh to convert conventional lavatories into flush ones, reportedly misused the funds. These mc s rather than replacing old lavatories, constructed 512 new toilets worth nearly Rs 7 lakh and spent the remaining cash on the construction of community toilets for which there was no provision in the scheme.

Murky results of the scavengery eradication scheme blatantly speak of the unwillingness of the top-strata to change ways. In the last decade, only 367 scavengers have been emancipated from the clutches of this inhuman practice. Another point of concern is the step-motherly treatment meted out to scavengers in the name of rehabilitation. As per the provisions contained in the scavenger welfare scheme, the scavengers emancipated from scavengery or their children are to be given professional training in various trades at Indian Technical Institutes (iti). Generally, the training schedules are either of one year's duration or of two years. But the trainees belonging to scavenger families are asked to complete their respective trades within six months. After a cross examination of such trainees at Shimla's iti, one finds that the training period is not only of a very short duration but it is also contrary to the learning process.

Scavenging is a social scar that we have allowed to continue. It cannot be eradicated with political dialogue alone. Organisations like Shaksharta (literacy) Mission and ngos can also play a vital role in this direction. Besides, various scavengery eradication programmes and scavenger welfare schemes can also bear good results if the funds allocated to these schemes are not misutilised. Scavengers, besides being trained for various job oriented trades can also be absorbed in various government departments. Duration of the courses meant for rehabilitated scavengers should be increased at par with the general trainees. Social issues like scavenging cannot be tackled by the government alone and it is the society which should bring about a transformation. It can contribute a lot by accepting rehabilitated scavengers as fruit and vegetable vendors, hawkers, tea-stall owners, workers, cooks and servants. In the words of Bindeshwar Pathak, founder of Sulabh International and renowned environmentalist, "Scavenging is not only a problem of keeping a place clean; it also involves great human suffering and indignity, the abolition of which alone can soothe the conscience of the nation."

Manjeet Sehgal is a freelance journalist based in Himachal Pradesh