Usually industry is regarded as the chief purveyor of heavy metal pollution. Roadways and automobiles constitute one of the largest sources of pollution by heavy metals. Various types of fuels, tire wear, batteries and brake emissions release significant amounts of heavy metals into the environment. Leaching from soil because of acid rain is another source of heavy metals. Occupational and household exposure may also lead to toxicity. Unregulated herbal medicines pose serious threat to public health as many of these traditional remedies contain dangerous levels of heavy metals.

The adverse effects of heavy metals, however, are not confined to direct toxicity on the living system. They can also blunt the beneficial effects of antibiotics. To understand this we need to know a bit about antibiotic resistance.

The discovery of a number of antibiotics, including the antitubercular drug streptomycin, during the 1940s and the 1950s led to a euphoria that all infectious diseases could be cured by antibiotics. But the harsh reality surfaced within a couple of years after the introduction of antibiotics in clinical practice. It became evident that pathogenic microorganisms can evolve and develop mechanisms that enable them to inactivate antibiotics. 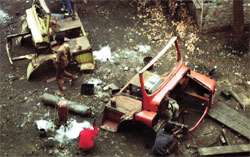 Antibiotic resistance is not the characteristic of any particular organism. It may occur in nature both in antibiotic-sensitive and antibiotic-resistant forms. Resistant microbes transfer resistance-conferring genes to sensitive microbes by various mechanisms. Soil, water, humans, plants and animals play host to both the sensitive and resistant varieties. Sensitive microbes outnumber the resistant ones, and not all of them are harmful to us. But by indiscriminate use of antibiotics, adding antibiotics to the animal feed and throwing unused antibiotic formulations here and there, we are suppressing the friendly microbes.

This shows tolerance of bacteria to various inhibitory substances does not require direct contact with the inhibitors. Heavy metals are just as culpable. The investigation underscores the urgent need for adopting stringent measures to contain the environmental pollution by heavy metals.

Madhab K Chattopadhyay works with the Centre for Cellular and Molecular Biology, Hyderabad. Hans-Peter Grossart works with Leibniz Institute of Freshwater Ecology and Inland Fisheries in IGB-Neuglobsow in Germany