Squeezed between the Naxalites and the police, NGOs abandon community mobilisation 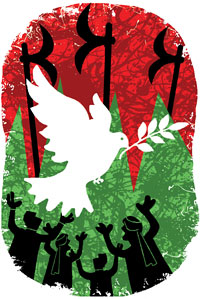 Why does a Left-leaning activist in Chhattisgarh always keep a copy of Mahatma Gandhi’s Hind Swaraj? “The contradiction saves me from both the police and the Maoists,” explained a wellknown activist working in Chhattisgarh’s Bastar and Dantewada districts, which are affected by Left extremists, popularly known as Naxalites. Other activists have evolved other ways of escaping harassment. Head of a communitybased NGO working in Gumla district of Jharkhand has scaled down his activities by 40 per cent in the past five years—“I have unwritten directions on which areas to work on.” An unwelcome change is creeping into the programmes and policies of NGOs and other civil society groups working in the Naxalite-affected districts of Chhattisgarh and Jharkhand.

This shows the shrinking space for development workers. They suffer the suspicion of both the police and the Naxalites. Six states, according to their intelligence departments, have put more than 125 NGOs and their workers under the scanner for their alleged links with Naxalites. Many of them have also received directions from the Naxalites to stop “certain” types of work (read: stop campaigns to mobilise people).

About a thousand NGOs operate in the 32 districts declared worst affected by Naxalites in nine states. Most of them help implement rural development schemes dealing with basic services like water, health and education. They also mobilise people to access new government policies or programmes since government presence in these districts is negligible.

NGO workers don’t openly articulate changes in their working sphere. However, once outside their areas of operation, they list the changes NGOs and other peaceful movements have un dergone in the last one decade. Pre sence of armed police and the influence of the Naxalites have curbed NGOs’ access to villages. Non-profit Gramin Punar Nirman Sahkarita Sansthan, which works in Gumla in Jharkhand, now hesitates to enter villages at night when people are at home and have time to listen to them. Ramyatan Sahu of the organisation says its agenda of mass movement to ensure people’s right to livelihood is virtually abandoned. As a result gram sabha (village council) meetings are not held regularly.

Gram sabhas are an instrument ensuring people’s participation in development work. In fact, they have nodal roles in implementation of the Mahatma Gandhi National Rural Employment Guarantee Act and the Forest Rights Act, crucial for rural development.

The situation is further exploited by government officials. Around 40 per cent of the village meetings in the state are fudged by block-level officers; they cite the threat of Naxalites, said a planning board member of Chhattisgarh.

In Jharkhand the Naxalites hijack the meetings. The state does not have elected panchayats and holds gram sabha meetings on the 16th of every month. People say the Naxalites have dedicated cadre for attending them. “They dictate the agenda. It is held under fear because we don’t know what they will like or how they will interpret our words,” said Rajesh Minz, a resident of Jamgai village in Gumla. So attendance in gram sabha meetings across the Naxalite-affected districts is declining.

This unfolds a bigger story. Of late, activists have started talking about space for peaceful movements in the face of growing Naxalite influence. In the past six years most programmes, like the Forest Rights Act and land reforms, have been declared with the stated objective of curbing Naxalites’ influence. Civil society groups have for long been trying to attract government attention towards underdevelopment and violation of peoples’ rights over land, water and forests. But the state seems to have woken up only now, said Souporno Lahiri of the National Forum of Forest People and Forest Workers. The Maoist movement actually undermines the civil society, the same groups and people who are now branded Maoist sympathisers by the government, he added. For those working on forest issues it is a bigger problem because they share the geographical space and issues with the Naxalites.

A Delhi-based activist working with forest communities said, “The re is no outrage against the Naxalites among us. But we do feel they have harmed the cause (of forest rights) by diverting focus to violence.” The re are instances in Madhya Pradesh, Chhattisgarh and Odisha where genuine demands for the implementation of the Forest Rights Act have been termed Naxalites-inspired by governments. Since the Naxalites also have their front organisations working on the same issues, they feel threatened by NGOs. “Naxalites want us to merge the community groups with their front organisations. That we can’t do for fear of the police, so we abandon mobilisation inside forests,” said a member of an NGO working on forest rights in Odisha.

“Movements and people’s organisations believe in and stand for mass democratic struggle for social transformation. But democratic space is shrinking and more so as a consequence of internal war between the Maoists and the State,” said Lahiri.