With little groundwork done, the Orissa government signed an mou with South Korean giant posco in 2005. It assured the company of requisite clearances and keeping the area free of all encumbrances. But the state's magnanimity has not made things easy for posco that plans to set up a Rs 51,000-crore project, including a steel plant and captive port. But after three years, impact assessments haven't been completed, ground surveys not carried out and the lease for mining has not been secured.In fact, mining lease and forest clearance cases are being heard at the Orissa High Court and the supreme court. Local people who stand to lose their livelihood to the project have been protesting for long.

posco is yet to procure permission for extracting 600 million tonnes of iron ore from Khandadhar hills in Sundergarh district. Media reports indicated that Orissa had granted the mining licences recently. But the state had earlier given away these mines to the Kudremukh Iron Ore Company Limited (kiocl), a public sector undertaking that shut down in Karnataka. kiocl had worked out contracts to set up a beneficiation/pelletization plant but Orissa asked it not to go ahead with its plans. When the state government's favourable bend towards posco became obvious, kiocl took legal recourse. The issue was first heard in the high court. Subsequently, a tribunal in the ministry of mines heard the matter. On May 30, a business daily reported that Orissa "is all set to recommend the Khandadhar iron ore mines" for posco, with the formalities to be completed in the first week of June following the tribunal's direction to re-open bids for licences.

posco requires 600 million tonnes of good quality iron ore for Orissa plant and 400 million tonnes for its plant in South Korea. Fears are that the Orissa government may have sold its valuable mineral resources cheap, something that both the Brazilian and Chinese governments resisted despite having the largest reserves and being foreign investment-friendly. The question even liberal supporters of the project in India asked was why didn't the state government mandate that the ore be bought from the state-owned Orissa Mining Corporation at market rates. The supreme court's Central Empowered Committee (cec) suggested the same for Sterlite Industries India Ltd (principal subsidiary of the Vedanta Resources Group). It recommended that Sterlite purchase the ore based on bauxite prices listed in the London Stock Exchange where the parent company is listed. 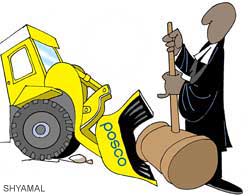 posco intends to utilize part of the iron ore in its steel plant and ship out the rest through export. The company was offered facilities of the existing Paradip port but at posco's insistence, the mouth of Jatadhar estuary was "cleared" for the establishment of a captive port. T R Baloo, Union minister of shipping, had written a letter to the Orissa government in 2006 highlighting concerns on the impacts of setting up a special facility near the existing port. Yet sanctions have been given for the captive port within 12 km of the Paradip port. Established in 1966, it has consistently logged in growing profits and should have been the first choice to meet posco's requirements.

The Paradip Port Shramik Sangh says that the traffic of 13 million tonnes of iron ore for posco can be easily managed within the 14 cargo berths with an annual capacity of 51.4 million tonnes. In 2006-2007, the port handled 38.52 million tonnes of cargo from 1,452 cargo ships. The decision to allow the captive port seems to have been made on considerations that don't include maximizing existing infrastructure. The deputy chairman of Paradip Port Trust has said that a breakwater will be required for the captive port. The definite effect of this construction on the littoral drift (a geological process by which sediments move along a beach shore) and erosion and accretion of the shoreline northwards and southwards must be kept in mind. Following meetings held at the ministry of shipping, it was decided that the Central Water and Power Research Station, Pune will be asked to conduct an assessment. What is not clear is whether this study was completed and its findings were used.

That decisions on such projects almost never consider the environmental and social impacts is a foregone conclusion.

The authors are members of Delhi-based Kalpavriksh Environment Action Group