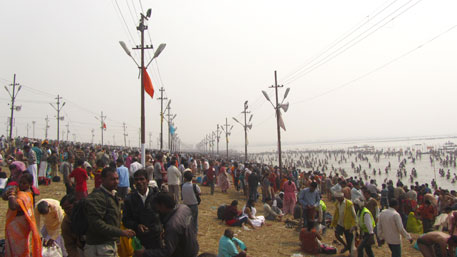 Something strange happened on Basant Panchami the second most auspicious and last royal bathing day of ongoing Kumbh. The ever-swelling figures of attendees at the festival shrank to most people’s surprise and disappointment. Final official tally reads 7 million, a far cry from the administration’s self-estimate of 19 million for the day. National media is abuzz discussing the possible reasons and culprits for this blasphemous happening. Many theories are being proffered but the blame can easily be put on the fear and insecurity introduced by the stampede on the previous royal bathing on new moon day. Thirty-six persons were killed in the stampede at Allahabad railway junction that Sunday which witnessed the gathering reaching the mind-numbing figure of 35 million people.

The situation was grim at the mela grounds, too, with people recounting stories of almost stampede-like situations. There have been stampedes in past Kumbh festivals, mostly in the other host cities (Kumbh at Allahabad last suffered stampede in 1954). Point to be noted here is that the current stampede happened inside the city of Allahabad and not in the mela ground. This is significant from many perspectives. Let me explain.

The temporary Kumbh city is planned and built, taking amply into account the insane footfall numbers expected for the event. Easy to monitor and manage grid-iron network of roads with extraordinary width of streets and supporting infrastructure in place. Successful and swift control of the few fire outbreaks with rarely any casualty in a city made-up of flammable tents and omnipresent open bonfires for cooking and rituals speaks volumes about the hazard preparedness in Kumbh city. Stampede in Kumbh city would have been failure of management but stampede in Allahabad is a classic case of failure of imagination.

A body too big with polio-ed legs

Allahabad is the host city from which Kumbh derives its nutrition. Millions who pack the ghats of Sangam arrive there using infrastructure meant and sized to the needs of Allahabad which has just a million people. So if a railway station designed for a maximum capacity of 40,000 is stuffed with more than 200,000 people, unflattering things are bound to happen. And it did happen. Kumbh organizers developed a marvel of tent city but failed to imagine the infrastructure upgrade needed by the old and haphazardly limited city of Allahabad.

Allahabad got only cosmetic touch up from the rumoured Rs 1,400 crore spent on the event (official audit numbers still expected).

Repaired main roads and widened arterial roads without footpaths, an escalator on the railway junction without fixing of shaky railings of foot overbridge and beautified parks with exotic plants were expected to enable the city which still lacks a public transport system. New sewage treatment plants, water tanks and sewer lines which city has got has nothing to do with Kumbh, as they are part of Jawaharlal Nehru National Urban Renewal Mission funding. A city which regularly hosts a mega event like this should have better infrastructure. Especially if the kind of money which is being talked about is being spent.

Olympic now carries a clause in the screening process of a host city which asks the hopefuls to detail the infrastructural benefits the city will achieve by winning the bid. Similar clause needs to be added to all the mega events, so that the hosts are left healthier at the conclusion of the event instead of being hospitalized in intensive care unit.

Reasons for the stampede will soon be established by the political and bureaucratic class as per their convenience. But it is the imagination and logic which needs to be established the most.