Prime minister Narendra Modi’s audacious election campaign and spectacular victory have added fuel to the debate over whether India should have presidential form of government.

His campaign that spanned over seven months and covered all the states had all the trappings of a US-style presidential campaign. As he settles down as the prime minister, there are early signs of his office aspiring to and acquiring unbridled power to shape policy and programmes. As a result, one may argue that he may practice presidential type of governance.

Many countries offer experiences with presidential form of governance. But it will be prudent and insightful to look at India’s own thriving presidential form of government—the panchayats. The panchayati raj system, the country’s third-tier elected government, has direct elections to the position of head or sarpanch. There are diametric differences between the Central and local governments. But presidential form of governance in panchayats needs to be studied from the perspective of natural resources management and delivery of rural development programmes. These two issues are not only Modi’s big challenges as the prime minister but also in these two issues, centralisation of power has often led to distorted delivery of development. 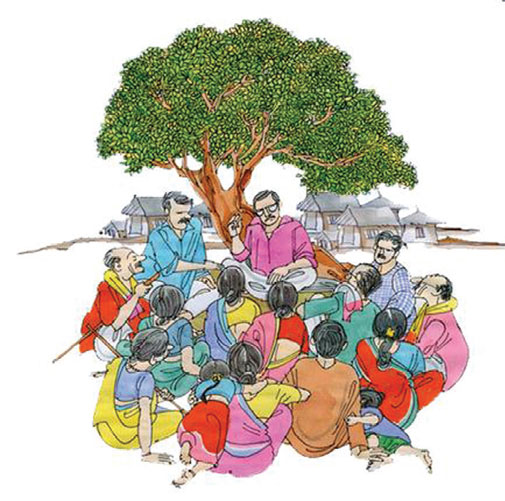 It is a common allegation that panchayati raj has become sarpanch raj. A directly elected head of a government in-charge of the last mile delivery of development has led to a crony capitalism scenario. Sarpanches have played favouritism and diverted benefits to their own people. On critical issues such as access to natural resources like common land and water, it is usually proximity to the panchayat head that matters the most. Currently, every village is legally mandated to script its own development plan in a secular way. But ground check of such plans shows that panchayat heads usually tweak the plans to benefit their followers. That is the reason attendance in gram sabha or the village council is decreasing. That is also the reason development has not been delivered to the right beneficiary. It means the idea of a directly elected head with unprecedented power is almost killing the world’s largest experiment with decentralised governance.

There is another aspect of the story. There have been positive responses to this situation, interestingly from the Central government, and in many cases from the Prime Minister’s Office. Sensing a centralised head of government making resource distribution highly discriminatory, over the last 20 years, Central governments have been systematically encouraging the supervision of the sarpanch by the village council. Former prime minister Atal Bihari Vajpayee, in fact, took special interest to dilute the power of sarpanch in favour of the gram sabha. Under the last upa government, all rural development programmes have mandated the gram sabha to take decisions that the sarpanch will implement with his other elected members. However, the format of the local government is still the same.

At conceptual level, both the prime minister and the sarpanch deal with the challenging task of sharing natural resources. Whether it is allocation of gas block or selection of site to construct a water harvesting structure, both the prime minister and the sarpanch are vulnerable to discrimination. But in the two cases if there is effective supervision or scrutiny, crony capitalism or natural capitalism may not happen. Second, a centralised system discourages innovation and local solutions. This is critical in delivery of development. Villages that are celebrated as role models in natural resources management often have solutions from local villagers.