Will machines ever take over?

Robots that can think are here, almost. But many see artificial intelligence as humanity's biggest existential threat 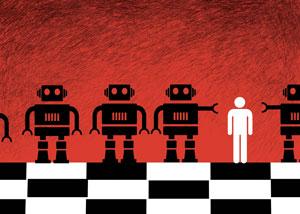 When robots start making fun of humans, it is difficult to look the other way. That is exactly what happened on October 26, when Sophia, a talking humanoid, took a dig at billionaire Elon Musk while being interviewed by CNBC’s Andrew Ross Sorkin in Riyadh. Asked if conscious robots could be a threat to humans, Sophia remarked that Sorkin had been reading Musk too much!

Musk is known for being wary of artificial intelligence (AI) and has called the technology a “fundamental risk to the existence of human civilisation”. And Sophia’s comments during her public interactions have not been reassuring at all. In April, during an interview with the US talk show host Jimmy Fallon, Sophia joked about “planning to dominate the human race”. Even in the interview with Sorkin, the bot said, “Don’t worry, if you’re nice to me, I’ll be nice to you.”

Though Sophia’s answers are wooden and sometimes unintelligible, mostly they make sense. So are we really close to technological singularity (when computers start developing their own intelligence) or to creating robots that are conscious?

Even the best of robots today cannot do the seemingly mundane tasks of running on an unknown terrain (most can slowly walk but barely maintain balance on an undulating surface), or catching an object (robots can catch, but the object thrown has to be of a certain size, shape and weight, and should be thrown within a prescribed area and velocity range), or identifying objects (it is easier to make a robot play chess than to make it “see” chess board and pieces). That does not make them appear anything nearly ready to take over the world anytime soon.

On the other hand are great minds of our times, such as Stephen Hawking, who said that AI could wipeout humans, and billionaires like Bill Gates and Musk, who want the technology to be regulated. Experts such as these would know better.

In 2014, Musk warned of something “seriously dangerous” happening due to AI in five to 10 years. Though nothing dangerous has happened so far, our fear of AI (and fascination with it) was evident a few months ago when a Facebook experiment spooked the media across the world. In July, scientists of Facebook Artificial Intelligence Research programmed two robots, Alice and Bob, to negotiate ownership of a few virtual items. The robots were “taught” to negotiate in English, but a few days later the researchers found that the two had evolved—they were still communicating in English, but the words made no sense. When the experiment ended, most headlines across the world said that Facebook pulled the plug because the bots had started talking in a secret language.

Though Facebook denied that the experiment was terminated (a researcher involved with the experiment tweeted: “Analyzing the reward function and changing the parameters of an experiment is NOT the same as ‘unplugging’ or ‘shutting down AI’”), clickbait headlines called the robots creepy and apocalyptic scenarios were portrayed in news articles. Experts explained that since there was no incentive for the bots to talk in English, they evolved a more efficient form of the language—a kind of shorthand. Though developing a language is a distinctly human trait and shows intelligence, it was not a first for AIs.

So were Alice and Bob trying to take over the world? Could they have? Will machines ever take over? They will, says Musk, which is why he is trying to colonise Mars—an escape option when AI turns against us. As for those of us belonging to the non-billionaire club, we might as well ponder if bots would be any worse in running the planet than we have been.