The tectonic collision that formed the world’s largest mountain range was actually a complex, multi-stage process — and not a single continental collision 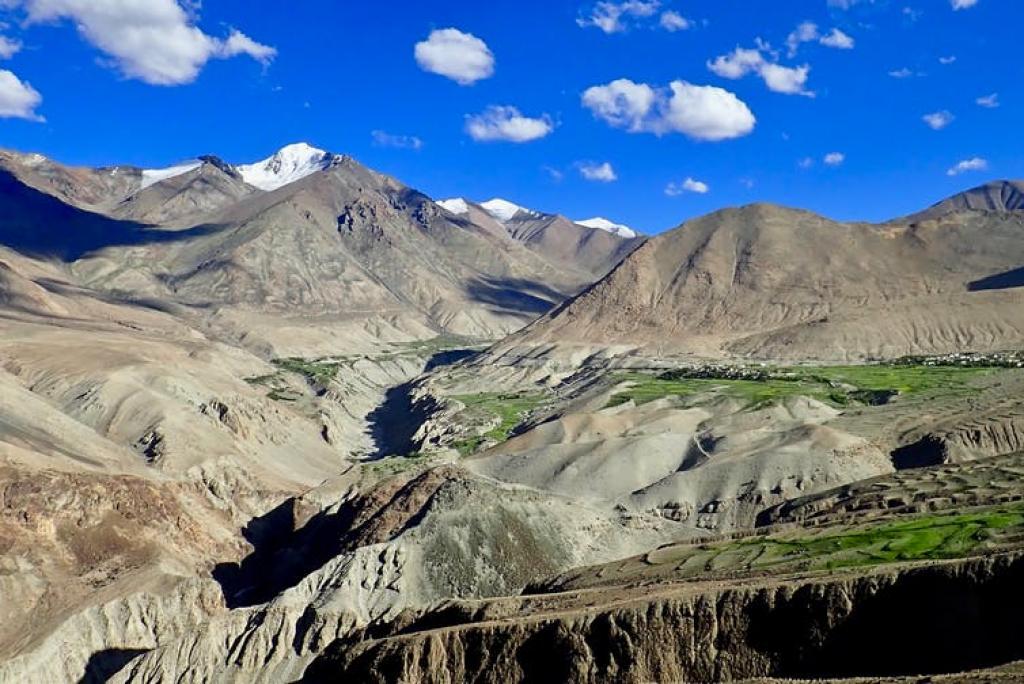 Breathing quickly in the thin mountain air, my colleagues and I set down our equipment. We’re at the base of a jagged outcrop that protrudes upwards out of a steep gravel slope.

The muffled soundscape of the spectacular Himalayan wilderness is punctuated by a military convoy roaring along the Khardung-La road below. It’s a reminder how close we are to the long-disputed borders between India, Pakistan and China which lie on the ridgelines just a few miles away.

This area also contains a different type of boundary, a narrow sinuous geological structure that stretches along the length of the Himalayan mountain range.

Known as a suture zone, it’s only a few kilometers wide and consists of slivers of different types of rocks all sliced together by fault zones. It marks the boundary where two tectonic plates fused together and an ancient ocean disappeared.

Our team of geologists traveled here to collect rocks that erupted as lava more than 60 million years ago. By decoding the magnetic records preserved inside them, we hoped to reconstruct the geography of ancient landmasses — and revise the story of the creation of the Himalayas.

Tectonic plates make up the surface of Earth, and they’re constantly in motion — drifting at the imperceptibly slow pace of just a few centimeters each year. Oceanic plates are colder and denser than the mantle beneath them, so they sink downward into it at subduction zones.

Geologists generally thought that the Himalayas formed 55 million years ago in a single continental collision — when the Neotethys Ocean plate subducted under the southern edge of Eurasia and the Indian and Eurasian tectonic plates collided.

But by measuring the magnetism of rocks from northwest India’s remote and mountainous Ladakh region, our team has shown that the tectonic collision that formed the world’s largest mountain range was actually a complex, multi-stage process involving at least two subduction zones.

Magnetic messages, preserved for all time

Constant movement of our planet’s metallic outer core creates electric currents which in turn generate Earth’s magnetic field. It’s oriented differently depending where in the world you are.

The magnetic field always points toward the magnetic north or the south, which is why your compass works, and averaged over thousands of years it points toward the geographic pole. But it also slopes downward into the ground at an angle which varies depending on how far you are from the equator.

When lava erupts and cools to form rock, the magnetic minerals inside lock in the direction of the magnetic field of that location. So by measuring the magnetization of volcanic rocks, scientists like me can determine what latitude they came from.

Essentially, this method allows us to unwind millions of years of plate tectonic motions and create maps of the world at different times throughout geologic history.

Over multiple expeditions to the Ladakh Himalayas, our team collected hundreds of 1-inch diameter rock core samples. These rocks originally formed on a volcano active between 66 and 61 million years ago, around the time that the first stages of collision began.

We used a hand-held electric drill with a specially designed diamond coring bit to drill approximately 10 centimeters down into the bedrock. We then carefully marked these cylindrical cores with their original orientation before chiseling them out of the rock with nonmagnetic tools.

The aim was to reconstruct where these rocks originally formed, before they were sandwiched between India and Eurasia and uplifted into the high Himalayas. Keeping track of the orientation of the samples as well as the rock layers they came from is essential to calculating which way the ancient magnetic field pointed relative to the surface of the ground as it was over 60 million years ago.

We brought our samples back to the MIT Paleomagnetism Laboratory and, inside a special room that’s shielded from the modern-day magnetic field, we heated them in increments up to 1,256 degrees Fahrenheit (680 degrees Celsius) to slowly remove the magnetization.

Different mineral populations acquire their magnetization at different temperatures. Incrementally heating and then measuring the samples in this way enables us to extract the original magnetic direction by removing more recent overprints that might hide it.

Using the average magnetic direction of the whole suite of samples we can calculate their ancient latitude, which we refer to as the paleolatitude.

The original single-stage collision model for the Himalaya predicts that these rocks would have formed close to Eurasia at a latitude of around 20 degrees north, but our data shows that these rocks did not form on either the Indian or the Eurasian continents.

Instead, they formed on a chain of volcanic islands, out in the open Neotethys Ocean at a latitude of about 8 degrees north, thousands of kilometers south of where Eurasia was located at the time.

This finding can be explained only if there were two subduction zones pulling India rapidly toward Eurasia, rather than just one.

[You’re smart and curious about the world. So are The Conversation’s authors and editors. You can get our highlights each weekend.]

During a geologic time period known as the Paleocene, India caught up with the volcanic island chain and collided with it, scraping up the rocks we eventually sampled onto the northern edge of India.

India then continued northward before ramming into Eurasia around 40 to 45 million years ago – 10 to 15 million years later than was generally thought.

This final continental collision raised the volcanic islands from sea level up over 4,000 meters to their present-day location, where they form jagged outcrops along a spectacular Himalayan mountain pass.