As neutral conditions are restored after a strong El Niño event, hopes for a better monsoon increase 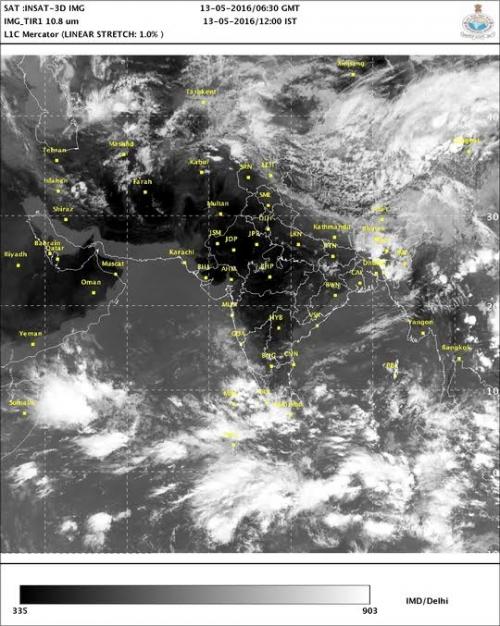 The much-awaited south-west monsoon is set to arrive in India on time, to bring relief for many. The signs of an approaching monsoon are clearly visible in the satellite images with intense clusters of thunderstorms and clouds in the equatorial part of the Indian Ocean. The near surface winds across the Indian Ocean have also changed direction, in line with the monsoon flow.

The monsoon reaches the south Andaman sea around May 15 and by May 20, it covers Andaman and Nicobar Islands, its first destination in India. The India Meteorological Department (IMD) has already announced the first stage of this year’s monsoon forecast—India is expected to get 101-111 per cent of average rainfall this season.

On time arrival expected in Andaman and Nicobar Islands

A low pressure region is likely to form in Bay of Bengal (near south-east coast of Sri Lanka) by Sunday, May 15. This low pressure will assist the onset of south-west monsoon in Andaman and Nicobar Islands. Rainfall in the region is expected to commence and increase from May 15 and hence the onset is expected to be a strong one. By May 20, monsoon should set over entire Andaman and Nicobar Islands region and hence an on time arrival is expected.

Models also show a possibility of another low pressure region forming in the Arabian Sea which can play an important role in determining the onset in Kerala. In the next week, the picture of monsoon’s onset in Kerala will become clearer.

The prospects of a better monsoon have strengthened, as a recent outlook announced an increase in the chances of La Niña weather event this year. Historically, India has seen better monsoon in La Niña years. La Niña is the phenomenon in which sea surface temperature in the equatorial Pacific Ocean cool below the average, affect weather across the world.

Climate Prediction Centre in collaboration with the International Research Institute for Climate and Society recently issued the monthly El Niño Southern Oscillation (ENSO) outlook. According to this update, there is about 75 per cent chance of La Niña developing by the winter of this year. This marks about 25 per cent increase in chances as compared to previous outlooks. The centre has also issued La Niña watch—a notification issued when conditions are favourable for development of La Niña within six months. La Niña watch is in progress since a few months, according to the Bureau of Meteorology, Australia.

The sub-surface water across the entire equatorial Pacific Ocean has cooled below average, a sign of weakening El Niño and transition to neutral or La Niña conditions. However, the ENSO is a phenomenon of not just the sea, but also the atmosphere and influences global weather through atmospheric teleconnections. Various models predicting the behaviour of Pacific Ocean expect it to cool down further, but the atmosphere over the ocean has been slow in responding to this change. As a result, weak El Niño related atmospheric conditions are prevalent. But the good news is that they are moving towards neutral conditions.

Although the accuracy of models to predict La Niña reduces during spring season, it can be inferred looking at the numbers that there will be no El Niño or El Niño-like conditions during this year’s monsoon. Neutral conditions are very likely during the first half of the monsoon. The likeliness of La Niña condition will increase in the second half of the monsoon. The exact time of transition cannot be determined right now. 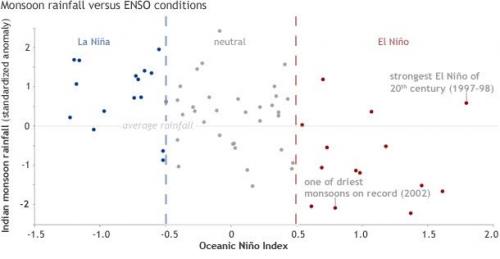 This is a very interesting scatter plot which shows how the ENSO has influenced India’s monsoon seasons during 1950-2012. On the X-axis, Oceanic Niño Index for June to September has been plotted. Values equal to or above 0.5 represent El Niño events, -0.5 and below represent La Niña events whereas the in between values represent neutral conditions. On the Y-axis, standardised rainfall anomaly has been plotted which is a measure of how good or bad the monsoon rainfall has been as per the standard deviations in the observed rainfall. For example, a standardised anomaly of 1 to 2 represents a very good monsoon rainfall whereas -1 to -2 represents poor rainfall.

It can be seen that most of the below average rainfall events have occurred during El Niño conditions whereas most of the above average rainfall events have occurred during neutral or La Niña conditions. Since 1950, there have been about 18 cases in which El Niño has transitioned to neutral or La Niña. In 12 out of these 18 cases, all India monsoon rainfall has been above 100 per cent of the average.

Hence, as long as there isn’t any unexpected deviation in the Indian Ocean or other factors, the odds of above average rainfall are high. By the end of this month, the state of Indian Ocean will become clearer.