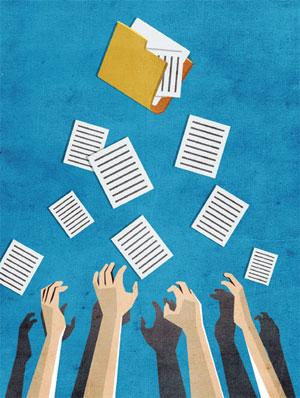 Once upon a time, pirates skulked on the high seas to ambush riches-laden ships. Their modern-day mutants prowl a different kind of sea, the sea of the World Wide Web. And their quarry is not treasure like gold and silk; they hunt and rob intellectual property such as music and books. But most importantly, unlike their old-fashioned ancestors, they are communists, or Robin Hoods, as some have dubbed them—they steal from the rich capitalists and share the booty with the less privileged. The creators of Napster, which burgled music files from the music industry, were the pioneers. Napster was eventually hunted down, but not before it had made piracy sexy.

The latest poster girl of the Brave New Pirate World is a spunky 27-year-old Kazakh neuroscientist called Alexandra Elbakyan. Five years ago, she stole the fire of scientific knowledge from its greedy monopolists and made it freely available to one and all.

Her instigation: she was frustrated as a researcher because a lot of the papers she needed for her work were behind paywalls—at least US $20 per paper to access them! So she broke and entered the encrypted safes of big publishers like Elsevier, pinched hundreds of thousands of papers, and dumped them in an open online vault called Sci-Hub. Currently, this pirate bay houses over 50 million journal articles, virtually every single peer-reviewed paper ever published, which anyone with access to the Internet can download for free. “Everyone should have access to knowledge regardless of their income or affiliation. And that’s absolutely legal,” she said.

Early this month, the journal Science published a survey of Sci-Hub that analysed data furnished by Elbakyan herself. The survey was largely based on the responses of its fans, so no surprise then that 88 per cent were okay with downloading pirated papers. Curiously, however, while bulk of the users came from Asia, American universities registered the third heaviest traffic, suggesting that even those who had legal access to the papers were looking in.

This suggests that the paranoia of the publishers might be unfounded, but the knives are already out. Last year, a New York district court declared the site illegal after Elsevier decided to sue Elbakyan. So far, two Sci-Hub domains have been taken down. Elbakyan’s subversive act could be seen as coup de grace of the decade-old open access movement in science. In 2012, scientists in the US revolted against a bill called the Research Works Act that sought to put certain restrictions on open access to public research. Some alleged Elsevier was behind the bill. The protests led to a movement called Cost of Knowledge, which campaigns for the boycott of Elsevier.

Ironically, the scientific journal was created in the late 17th century to enable greater access and sharing of scientific research. Before that, most scientists, including luminaries like Newton and Galileo, couched their research in secret ciphers, lest their peers stole the fruits of their labour. But the politics of the 20th century, with its two world wars, decolonisation, and the subsequent economic competition in an increasingly globalised world, altered the open character of science. As scientific research was a precursor of new technologies, which in turn, propelled the engines of economic growth, economic and strategic logic dictated secrecy around certain kinds of research.

The Internet has, in fact, helped the publishers fatten their bottom lines by drastically cutting down the traditional overhead costs such as typesetting, printing and distribution. Elsevier reportedly makes an annual profit of more than US $1 billion.

Elsevier will surely try hard to bring Sci-Hub down, and maybe even get Elbakyan arrested. However, observers say she is safe as long as she is in Russia. As for Sci-Hub’s future, it seems secure, as the entire archives have been cloned many times over. Regardless of who has the last laugh in this battle between profit and equality, the genie of “who owns public science” is not going back into the bottle in a hurry.