The curse of cheap diesel 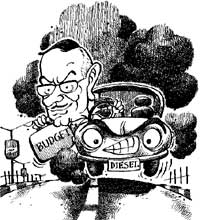 yashwant sinha's maiden budget promises to leave us breathless, but not out of admiration. At best a weak attempt at financial jugglery, with its reliance on stiff indirect taxes, and consequent high prices, the budget looks like a huge leap backwards into the seventies. Worse, like then, Sinha's finance document treats environment protection as a virtual non-issue, though low-decibel tokenistic noises have been made. To make matters worse, the budget threatens through fiscal interventions to destroy even the quality of air in India's towns and cities.

The bjp- led government has not dared to stray from the beaten path. Our politicians have always kept the well-to-do farmer happy by raining on him numerous subsidies and sparing him tax on his agricultural income.

Perhaps the most haunting aspect of these subsidies is low-priced diesel to work rural pumpsets on which irrigation for rich farmers quite crucially depends in large parts of India.

This budget leaves diesel untouched but raises petrol prices, with the most likely consequence of the overall dieselisation of the economy.The irony is that while the political rationale for not fiddling with diesel prices is the concern for the "poor Indian farmer", the environmental impact of relatively cheap diesel is felt by those who live in India's grimy and progressively more polluted towns and cities, particularly the urban poor, who are especially mired in filth and pollution. And it is in cities that the switch-over from petrol to diesel occurs most conspicuously.

It is well known that the Indian automobile industry is well-poised to take advantage of the price difference between petrol and diesel. Almost every automobile major -- Maruti Udyog Limited, a joint venture of Mitsubishi and Hindustan Motors, Premier Automobiles Limited, Mercedez Benz, Ford Escort -- has plans to diversify into making a range in diesel cars, which are more expensive than their petrol variants.

telco , which is venturing for the first time into the personal vehicle segment, soon plans to introduce a 1,400- cc diesel vehicle. Thus, a tax exemption meant to benefit the "poor Indian farmer" is actually utilised by the urban rich who drive the expensive cars that run on relatively cheap diesel.

Scientific evidence on the carcinogenic effect of toxic particulate matter in emissions from diesel vehicles, particularly those driven on the poor quality diesel marketed in India, has bypassed the planners completely. Recent reports from the United States Environment Protection Agency (usepa) show that diesel engines emit almost a hundred times more particulate matter than petrol engines. Scientists in Japan have also isolated a deadly compound in diesel fumes which is known to be the deadliest carcinogen known till now. Even scientists back home in the Central Pollution Control Board (cpcb) in India say that the relative contribution of diesel vehicles to the pollution load is higher than petrol vehicles.

The transport sector uses 70 per cent of the diesel produced in the country. Even the argument that the diesel should be cheaper to keep freight cost low to keep inflation down does not fit here. Freight movement by road is more energy inefficient and more polluting than rail transport. In 1970-71, 66 per cent of freight traffic was by rail. This had come down to 47 per cent by 1991-92, thanks to the relatively cheap but polluting diesel.

This dieselisation of the Indian automobile fleet is poised to take off using extremely dirty diesel. Indian diesel is one of the dirtiest in terms of high sulphur content which is around 0.5 per cent. After much delay the government has agreed to reduce this to 0.25 per cent by the year 2000, while the rest of the world prefers that this be around 0.001 per cent.

Therefore, Indian diesel with 0.25 per cent sulphur cannot make any appreciable difference to air quality considering the galloping growth of the automobile sector. And, so long as the diesel used in the country remains below par in environmental terms, plans of some car companies to introduce engines that are only compatible with higher-grade diesel use, will have to lie on the shelf.