Bangladesh's flood victims have little or no work, and little or no money to buy food. And even the foodstuffs that are provided to them under relief measure are not as nutritionally sound as they ought to be 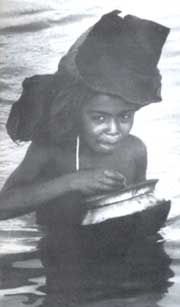 THE rains have stopped. The sun is out. But there is water, water and water everywhere in Bangladesh. We are not talking about drinking water here. It's the stinking, stagnant flood waters that have submerged entire fields, waterlogged streets, and affected 30 million people, out of which 10 million are in need of aid to eke out a living.

The poorest are always the worst hit at times of disaster. A landless agricultural labourer would, at this time of the year, be earning 60-70 taka a day by transplanting paddy seedlings. Now the land is under almost 10 feet of water. He's left jobless. The International Federation of Red Cross and the Red Crescent Societies (IFRCS) and the Bangladesh Red Crescent Society (BDRCS) have been at work, supplying food and medical assistance to people living in more than 30 districts nation -wide. But the supplies have been far from enough.

Many problems are being encountered in the implementation of the government's Voluntary Group Feeding (VGF) scheme, a temporary arrangement to meet the needs of individual families affected by the flood. But while 30 kg of food-grains is allotted per family per month under the Voluntary Group Development (VGD) scheme, a long-term arrangement, only 16 kg has been provided per family so far under the VGF. Sixteen kg of grain per family is simply not enough from a nutritional point of view unless it is regarded as a supplementary amount.

With plentiful supplies of foodgrains sent to the country as aid from donor nations and the World Food Programme (WFP), it is bewildering why the only 16 kg per family per month is being used. Therefore, the BDRCs and many non-governmental organisations (NGOS) are under considerable pressure to plug the food and nutrition gaps in the worst-affected areas.

While discussing the overall food security Situation, it is important to take note of the other additional foodstuffs, such And even the foodstuffs that are provided to them under relief measure are not as nutritionally sound as they ought to be as pulses, vegetables and cooking oil, which are needed to make a well-balanced diet. These items can only be procured by selling some of the grain which, in turn, makes the situation even more precarious. But it is important, at the early stages of recovery after the disaster, to be as realistic as possible so that everyone can face the challenges that lie ahead and be better prepared.

Some NGOS in Bangladesh are of the opinion that 1,200 calories (kcals) should be enough for an adult per day, and 800 kcals for a child. But international aid agencies such as WFP and UNHCR, after years of discussions and lobbying, finally agreed last year that the average per capita calorific intake should never be less than 2,100 kcals a day. Nutrition experts also advise that calorific needs should be worked out on a per capita basis. There should not be a separate calculation for children as the family food basket is shared out according to the need of every individual in the family - for instance, a manual worker requires more food than one who lives a more sedentary lifestyle.
Official statistics show that the average per capita intake of calories in Bangladesh on better days is 1,800 kcals. Hence, it is of further concern that the per capita availability of pulses, vegetables, oilseeds and fruits is not really satisfactory and, for many, they are unaffordable. People who possess knowledge about edible roots and leaves live on them at times of need.

According to a survey conducted by the Bangladesh Rural Reconstruction Association, the daily per capita availability of pulses has drastically reduced from eight grams in 1973-74 to about 5.5 grams in 1994-95. The per capita availability of vegetables also plummeted from 58 grams per day in 1969 to 36 grams in 1993. The statistics for oilseeds are no better. Aid organisations, in addition to giving high priority to growing nutritious, quick-growing indigenous vegetable species, should be providing protein and calorie supplements to enhance the nutritional value of the VGF allocation of food-grains. Some international experts in the field of nutrition have suggested that if only 1,200 kcals per day are available, weight losses of at least 10 per cent should be expected over a two to three-month period. Others have pointed out that this level of nutrition is totally unacceptable. Everyone should be encouraged to grow as many nutritious vegetables as possible, and as soon as possible, to improve the overall nutritional situation.


At the time of the Bihar famine of 1966-67, I was working with Oxfam, an international famine relief organisation. We were able to work closely with a businessman at Sitapur in Uttar Pradesh, India, to manufacture a high protein food supplement derived largely from groundnut. It was a challenge we had under taken despite the risk of a deadly bacteria, aflo toxin, which had often been encountered in the process of making groundnut byproducts. The food supplement powder - mixed with imported wheat flour, dal or other preparations was used in the Bihar feeding schemes. When the Sitapur factory was not able to supply enough of the high-protein food supplement, Oxfam discovered that the Calcutta Municipal Corporation had a similar plant which was hardly used on a regular basis.

Instead of importing expensive food supplements from abroad, Oxfam was able to galvanise the local facility into action and for many months purchased the entire production. The same food supplement was used again in the 1971 Refugee Relief Camps in West Bengal. Organisations like Oxfam and Save the Children Fund-UK set up nutrition rehabilitation centres for the under-five-year-olds.

So many years have passed since the Bihar famine or child nutritional problems in West Bengal in 1971 . It is a great concern to many of us that food supplements are still imported into Bangladesh. This despite the fact that there are a number of under-utilised local facilities making more appropriate food supplements from groundnuts; and soybeans and are easily available. It is difficult to understand why these products are not used and the local industries manufacturing these food products are not supported by the government. Chira and gur are indigenous foodstuffs which are used very effectively as emergency rations where only dry food can be distributed. For long-term schemes, indigenous foodstuffs can surely be used. To tackle any such situation better in the future, it is of prime importance to document all the different kinds of nutritional rehabilitation feeding schemes currently being under-taken in Bangladesh. This should be done while the ongoing relief programmes are still fresh in our minds. There are many lessons to be learnt from this disaster. Only then can people be assisted in a more appropriate way in the future.