THE RACE TO GO SOLAR 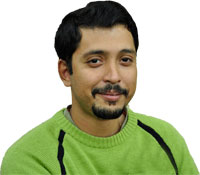 The fourth floor of the Chandralok building in the busy Janpath area of Delhi was choc-a-block on February 10. It was nearing 3pm, and a crowd had gathered in the conference room of Central Electricity Regulatory Commissions (CERC).

There must have been about 200 to 250 people and the room was evidently not designed to accomodate those many.

Every seat was taken, every pillar had someone resting their back upon, even as the commission's staff tried to put in more chairs, pushing their way past people standing in the doorway. Some looked at their watches, others exchanged last minute notes. All were waiting for the CERC’s chairman and the two members to take their seat and proceed with public hear on fixing capital cost of solar power project to be sanctioned under JNNSM: solar-PV powered plants for the year 2010-2011 and solar-thermal plants commissioned in 2010-2011 and 2011-201.

There were 52 submissions in all, both oral and written that commission had to hear before deciding to fix the benchmark cost for setting up of solar-thermal project. These included both solar-thermal and PV power producers, PV cell and panel manufacturers, renewable energy consultants and non-profits. Shri Shakti, a PV panel and solar water heater manufacturer began proceedings with their presentation before the three member commission. It was followed by Tata BP Solar, another manufacturer.  These two companies argued fixing the input cost for producing electricity from solar-PV should also include loss efficiency due to degradation of panels over its lifetime of 25 years.  Another point raised by these companies was that capacity utilization factor of solar-PV which has been pegged at 19 per cent cannot be achieved in India, except Rajasthan. While there was a  diversity in the types of companies which presented before the commission, the plea was the same: to increase benchmark cost of setting up of solar-powered plant.

The commission in February 2009 had fixed the normative cost of setting up of a PV based plant at Rs 17 crore/Mw while for Solar-thermal, the cost was set at Rs 13 crore/Mw. This translated into feed in tariffs of Rs 18.40 per Kw/hr and 13.50 Kw/hr.  But for 2010-2011, due to falling cost of solar-PV cells the proposed tariffs for PV was to be set at Rs 16.6, while for CSP systems it was to be increased to about Rs 14.6. But the presenters wanted these figures to be increased. For Solar-thermal projects, some companies wanted cost per Mw to be as high as 26crore/Mw. National Thermal Power Corporation, a government of India enterprise, which solar-thermal projects pegged the costs at about Rs 25 crore a Mw. Others like Sunborne and Acme wanted Rs 17.25 crore and about Rs 16 crore respectively.

Dhruv Batra of Cargo Power and Infrastructure Limited one of the participating companies in the public hearing explained these wide variations. “Spain, one of the leading proponents of solar-thermal calculates cost at Euro 5 million per Mw, whereas in India it is only Euro 2.5 million,” he said.  Vijay Lakhanpal, Chief Operating Officer of Forum for Advancement of Solar Thermal says depending on the technology, cost of a CSP system may differ. “Systems like Tower and Dish-Sterling systems can give you better efficiencies at a lower cost but they have yet be commercially proven. Therefore parabolic troughs may be more expensive but they also have more commercial success then the other technologies,” [see graph] he said. “We still do not know  the exact cost of setting up solar-thermal power  plant in India, it is still a guessing game,” he adds.

The most expensive part of the solar-PV power plant are silicon modules. The CERC had pegged the cost of these modules at $ 2/Wp or about about Rs 9.15 crore/Mwp (CERC conversion rate Rs 45.75/US$.) and Rs 8 lakh for the supporting structures. Tata BP commented that the cost of panels should be calculated at Rs 10.1 crore/ Mwp ($ 2.2 per Kwp), while Solar Energy Society of India, a body comprising of cell manufacturers,  power generators and bureaucrats wanted the price fixed at Rs 10.5 crore. The industry also opined that for optimal performance of the panels, the CERC may also consider adding the cost of tracker into the cost of panels. Other components such as cost of power conditioning units, cost of evacuation were also presented by companies.

Recently, the CERC came out with the revised cost for solar-pv and CSP system. For solar-PV, the revised tariff were increased to expectations of the industry. At Rs 16.9 crore per Mwp, the final benchmark cost  was significantly higher than what was thought about and marginally lower than 2009. Further for CSP systems Rs 15.30 crore was fixed per Mw.