GDP grows at environment’s cost. Can this trend be reversed? 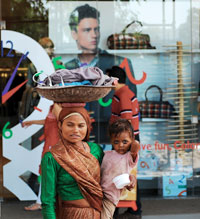 At a time when courts hog headlines, this was a conspicuous slip. About two months ago, the Uttarakhand High Court admitted a public interest petition on making gross environmental productivity a co-indicator of the state of the economy along with the standard gross domestic product (GDP). The media did not take note and there was not much discussion on its significance.

The court has asked the state government to reply to the petition by Dehradun-based non-profit, Himalayan Environmental Industries and Conservation Organisation (HESCO). Going by what government officials say, the state government has agreed to incorporate environmental factors while measuring GDP. This is probably the first public interest litigation (PIL) challenging the concept of GDP as an indicator of economy in the Indian context. GDP does not include the massive informal economy eked from local ecology.

The petition argues that local ecology sustains the maximum number of people in the state while the GDP-based growth model caters to a small percentage of the population. So, it is not a robust indicator of the true state of the economy. “GDP reflects livelihood of only 15 per cent people. The rest 85 per cent depend on local ecology for survival. The economy of the majority, thus, is not reflected by GDP,” says Anil Joshi who heads HESCO. Joshi says that GDP will never be environmentfriendly and has sought judicial intervention to strike a balance between the environment and GDP-based growth.

The litigation is a landmark in many ways. First, the case pertains to the current economic policy of the government. Usually, judiciary is hesitant to interfere in this domain. Bringing in environmental arguments to counter the policy in the judiciary opens many windows. Interestingly, the court has asked the state government to reply to the petition by citing the directive principles of state policy of the Constitution that mandate states to protect and improve the environment.

Second, the petition argues that Uttarakhand was granted separate statehood because of its unique ecology and the economy it has created. So, a special state cannot have the standard GDP measure alone. Otherwise, it will perpetuate a faulty measure of economy. States like Chhattisgarh and Jharkhand that were created on the same ground can use this argument for seeking a different measure of economy.

Third, India is currently working on measuring its environmental economy in preparation for a green GDP by 2015. If Uttarakhand has to measure the gross environmental productivity, it will be a prototype for the country to emulate.

In a way, the court while deciding this case is going to deal with the age-old debate on the relationship between GDP and the environment. GDP eats away at the environment and greatly benefits from environmental degradation. For example, in Uttarakhand many water supply schemes have become redundant due to drying of hill streams. It is bad for the environment but may lead to high GDP as repairing the schemes or creating new schemes will involve more expenditure. However, if we measure the environmental cost of the drying up of the streams and deduct it from the state’s GDP, the growth rate will fall drastically.

There are studies that show that after adjusting the environmental cost of growth, India’s nine per cent GDP growth rate will fall to three per cent.

Going by the above example, it is clear that GDP does not consider the local economy based on forests and streams. Deforestation leads to drying of streams. People lose incomes from forests as well as agriculture. Add to it the burden of not getting clean drinking water. As village after village faces this ecological poverty, the state’s GDP continues to grow. This perhaps explains the chronic poverty in all ecologically rich areas of the country. Two decades of economic liberalisation that made GDP growth rate the new pulse of the country have not had a positive impact on the poor as was expected. Rather, the poor in the country remain poor or are becoming poorer despite the high GDP growth rate. This is where the significance of the PIL filed by HESCO in the Uttarakhand High Court lies. It can bring the natural capital of the country into the mainstream economic discourse. This is the only way that the poor people’s economy can be recognised and improved.